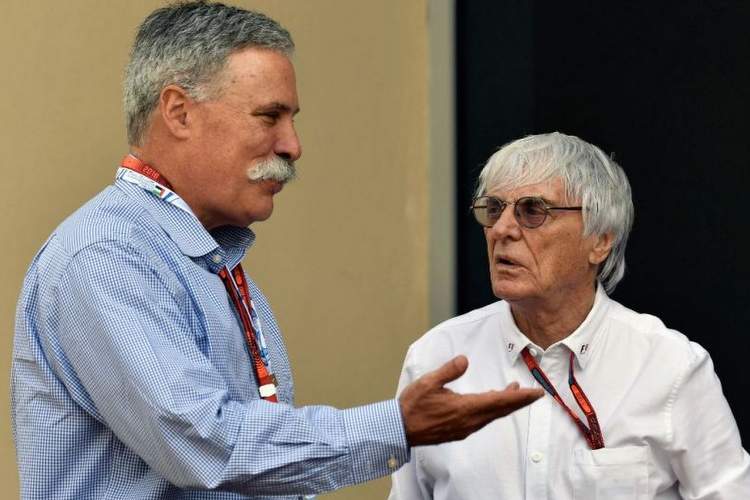 Former F1 supremo Bernie Ecclestone, who was unceremoniously overthrown by the sport’s new owners Liberty Media, harbours no grudge towards the man who replaced him at the helm – Chase Carey – instead the marginalised billionaire feels sorry for the new Formula 1 chief.

Speaking to the Daily Mail, Ecclestone said, “Chase had preconceived ideas of what needed to be done. But now he’s on board, it isn’t quite as easy as he thought. So I feel sorry for him.”

In the aftermath of his ousting,Ecclestone still attended some races early on in the season. But soon he got the message that his presence in the paddock, in which he had reigned for four decades, was not wanted by the new regime.

Ecclestone exlplained, “Chase sent a message to one of the girls in the office to tell me that they haven’t got so many offices at the circuits — only what the race promoter gives them.”

“There are three of them (Carey, commercial director Sean Bratches and technical director Ross Brawn) so the three offices are being used. So basically they don’t want me to come to races. It would have been just as easy to have said that to me. Anyway, I have obliged them.”

As for the coup d’état Ecclestone recalls, “I didn’t choose to leave — I was fired. Chase called me on the Sunday, and said: Can I see you tomorrow? He said he’d come to the office.
I said: Yeah, I’ll be there.
He said: You know we completed the deal on Friday?
I said: Yes, congratulations.
He said: I need you to stand down as chief executive. That’s the job I want.
I said: He had bought the car and might as well drive it.”

“I resigned. They had all the documents on them for me to do that. It was a surprise because I was told they wanted me to stay on a three-year contract. I could have made a bit of a fuss, but I didn’t.”

“If the boot had been on the other foot, I would not have done it the way they did it. They would have been better off working with me for six months and seeing how it went. Anyway, they elevated me to such a high position in the company that I can’t see what’s going on.”

“It’s a bit of a wrench not being involved in Formula One… but you get used to it. [I miss the] people. The people who became friends. Nice people,” added Ecclestone who also revealed he would be selling his Hyde Park building where he lives and that once housed the Formula One Management HQ, over which he presided, and will be leaving London to live in Switzerland.

As for this season’s Formula 1 world championship title battle, Ecclestone predicted without mincing his words, “Lewis will win it in Austin next race. He has driven superbly this season, while Ferrari awoke and then fell asleep.”