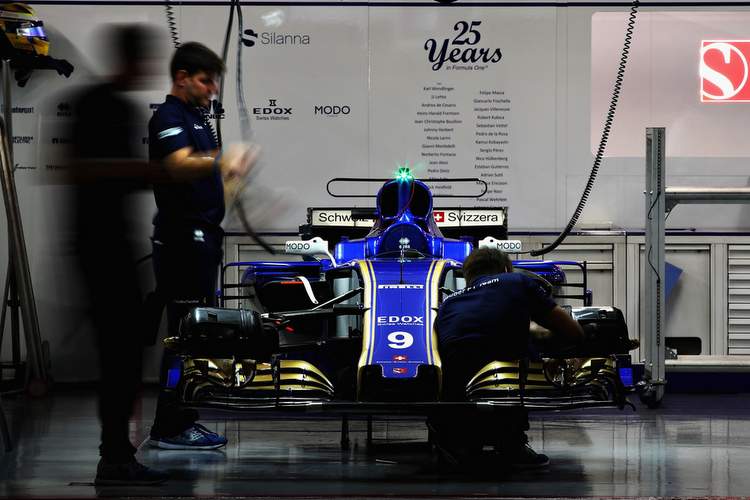 We take a look at the technical developments in the wake of the Japanese Grand Prix, Round 16 of the 2017 Formula 1 World Championship, at Suzuka.

At Suzuka, Williams finally added a higher downforce rear wing to its FW40, after using a spoon-shaped design for the entire season so far, even at tracks such as Monaco, Hungary and Singapore, where a severe performance disadvantage was being carried as a result.

This is something that this author has pointed out many times this year, and it is very strange that it took this long to design such a wing given the team’s generally poor speed on slow-speed circuits (which this update will improve) and the fact that all other teams had a higher downforce wing available from Spain/Monaco onwards.

The new design features a significantly greater angle of attack along the outer portions, plus a slightly steeper incline in the central section. Quite simply, this will result in much more downforce being produced, at the expense of some straightline speed – but the former will greatly outweigh the latter at the majority of tracks.

The most interesting aspect of the new wing is the very aggressive level of camber being run along the central portion, as high, if not higher, than any other team on the grid. 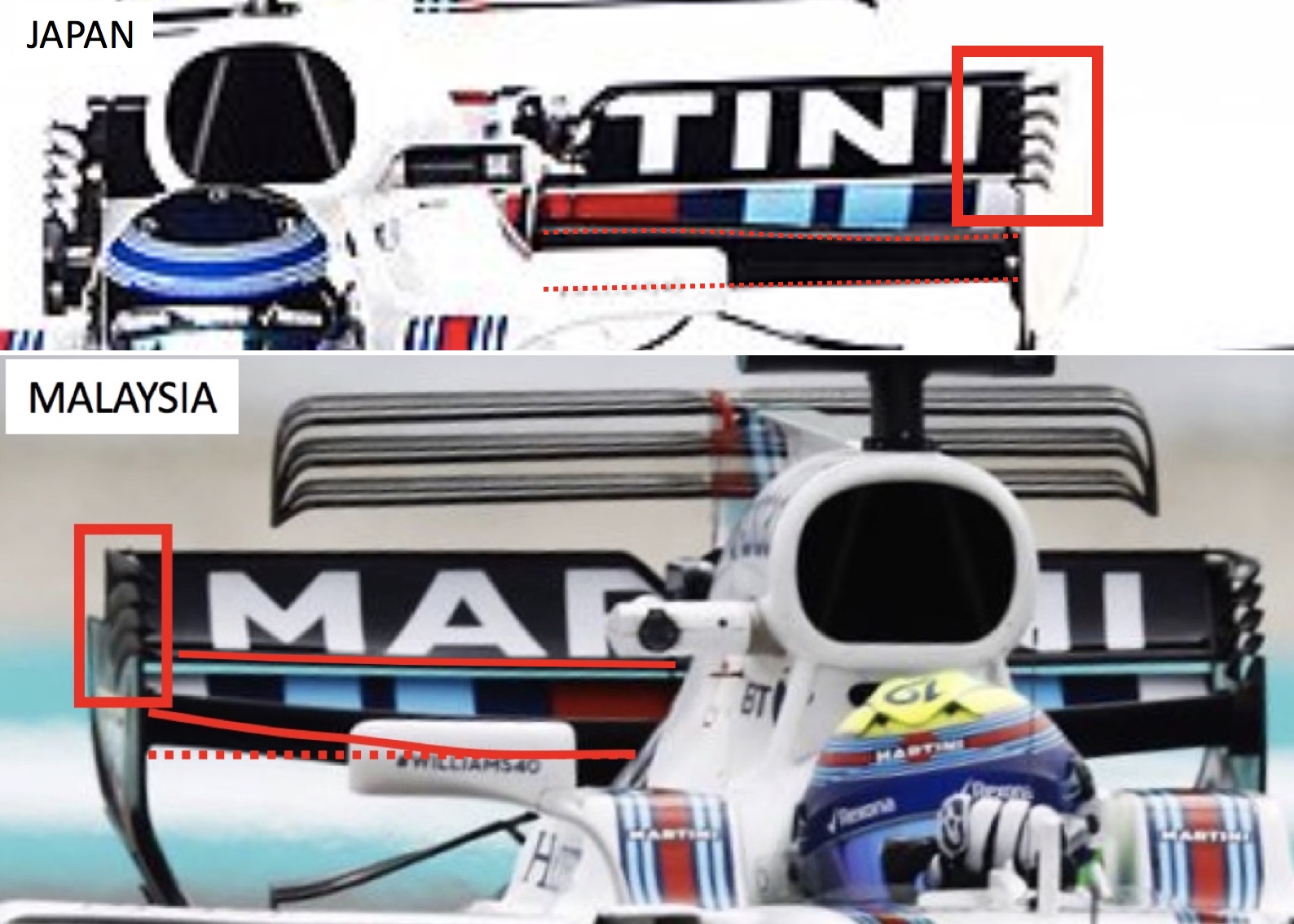 This brings with it the risk of airflow separation on the underside of the wing, the result of which would be a large loss in downforce and rise in pressure drag – however, the continued use of a monkey seat should help in this regard. In order to better equalise the now greater pressure differential either side of the endplate, for lower vortex drag, there are five louvres in the revised endplate, one more than previously.

Now that the new rear wing is on the car, with much more downforce, the team has turned its attention to the front of the FW40, where the drivers ran different wing set-ups in qualifying and the race. Massa used the low chord, low angle of attack design first introduced in Baku, and run ever since.

Meanwhile, Stroll returned to what appears to be a similar wing to that with which the team started the year, with a much more aggressive angle in the central section, as well as a larger chord.

The fact that it is only with the greater load rear wing that the team is considering running more downforce suggests that the FW40 has been suffering from rear load problems this season, meaning the front wing has had to remain in a medium downforce configuration for many races in order to enable a drivable car.

With high fuel, this balance issue was alleviated to an extent, evident by better race pace versus qualifying performance at most of races prior to Suzuka, but the inherent problem still remained.

In terms of future development, the FW40’s diffuser still appears to be quite under-developed compared to the team’s competitors, so this will be a key area of focus for the remainder of this year and into 2018. More rearward downforce gains in this area will then allow the front wing to be stepped up again, which appears possible when comparing it to the designs of other teams on the grid.

Renault has struggled for pace in the last two races, seemingly being out-developed by Force India, who brought a significant upgrade to their car in Singapore. The Enstone team, on the other hand, has been quieter on the development front, something that will need to be addressed if the outfit wants to challenge the top teams in the future.

In Japan, a new engine cover/sidepod configuration was tested during practice, although ultimately, the team decided to use the old version for qualifying and the race. From the comparison below it can be seen that the new design features a significant reduction in the sidepod’s volume. This will help the team reduce drag via lower skin friction, both along the outer and inner surfaces of the sidepod. 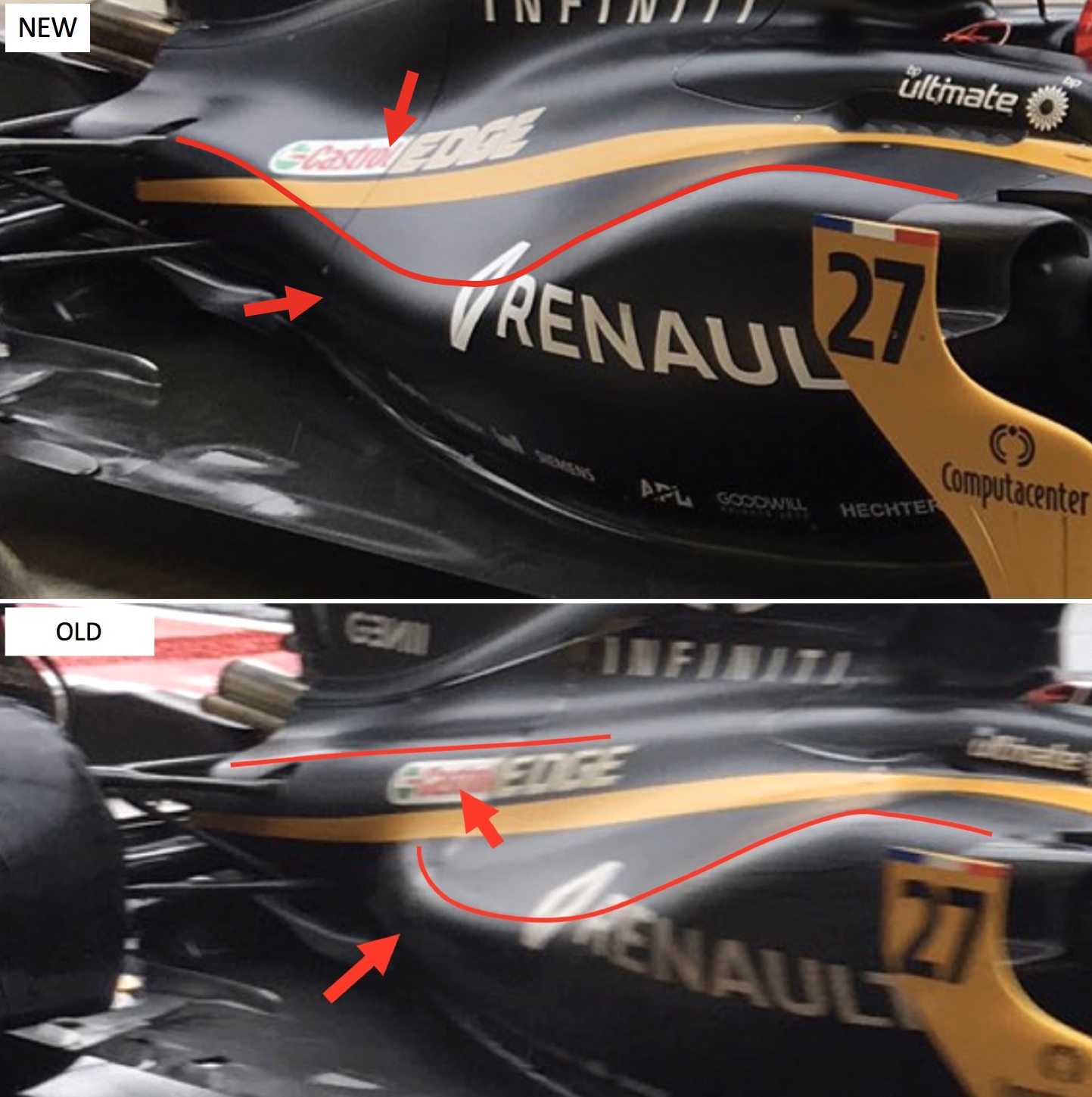 With this small gain, an improvement in the R.S.17’s aerodynamic efficiency, a weakness of this year’s car, will result. In addition, together with the new sidepods, one of the fins above their leading part was revised.

All winglets in this area act as vortex generators – previously, the vortex shed by the larger, horizontal element was directed significantly outboard, but now this is less pronounced. Indeed, the new rotating flow will actually travel parallel to the car’s centre plane. 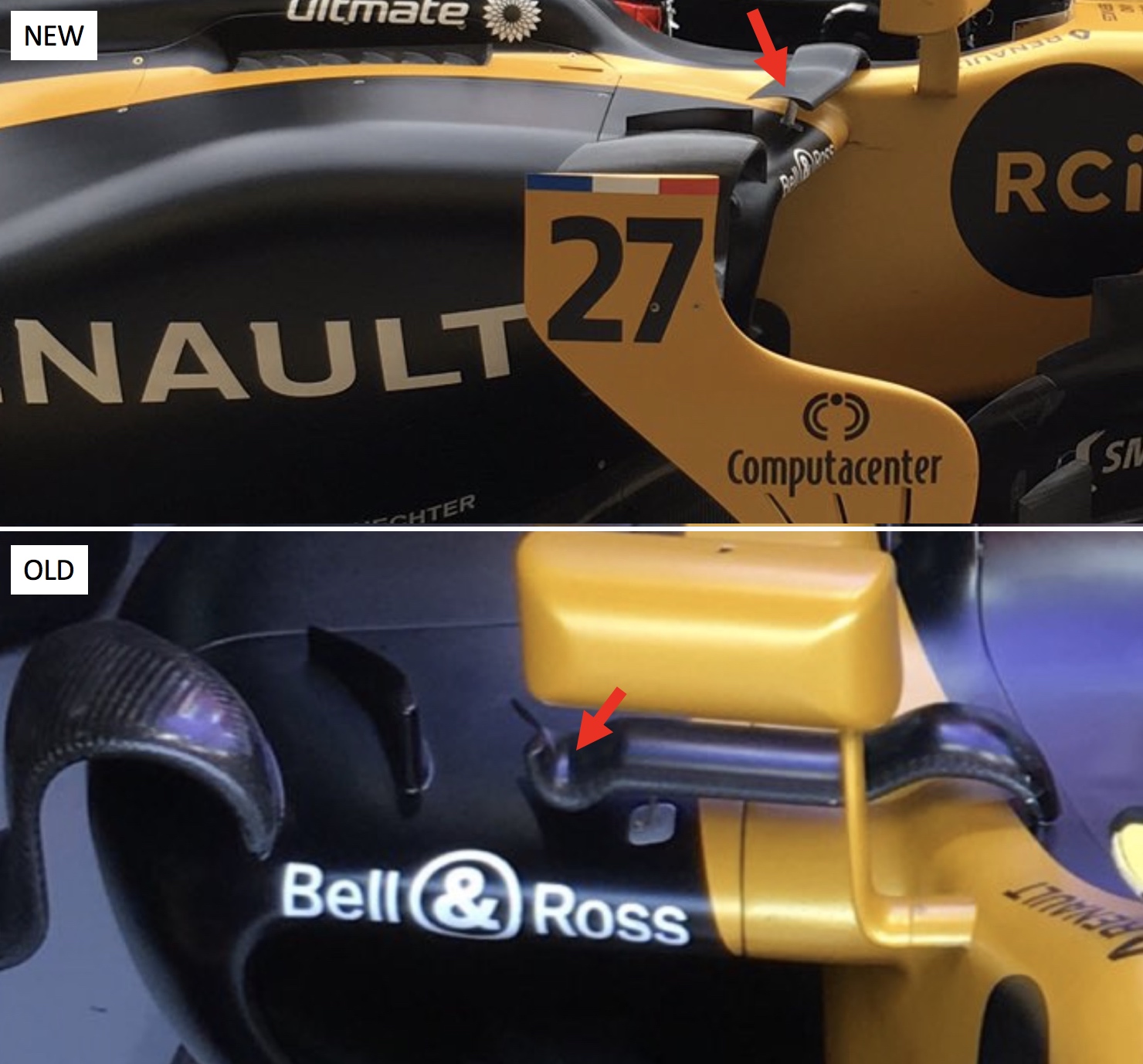 These vortices energise the boundary layer above the sidepod, especially as it drops away, in order to minimise the risk of flow separation and a consequent rise in pressure drag. With the revised shape of the rear bodywork, the inner vortex has been altered in its positioning to reduce the likelihood of this phenomenon.

Sauber brought an unexpectedly large upgrade package to the Japanese GP, with previous comments from the team suggesting that the final developments of significance would be on the car by Singapore. The main update to the C36 concerned the front wing, which was revised in multiple areas.

Firstly, the old slot at the front of the mainplane (not shown here) was repositioned and extended across the majority of the wing’s width (visible below), the purpose of which has been discussed in great detail by this author previously – namely to improve airflow attachment to the underside of the wing for better downforce levels, together with lower pressure drag.

Note also that the second slot in this element was extended a little further inboard, right up to the FIA-mandated neutral section. 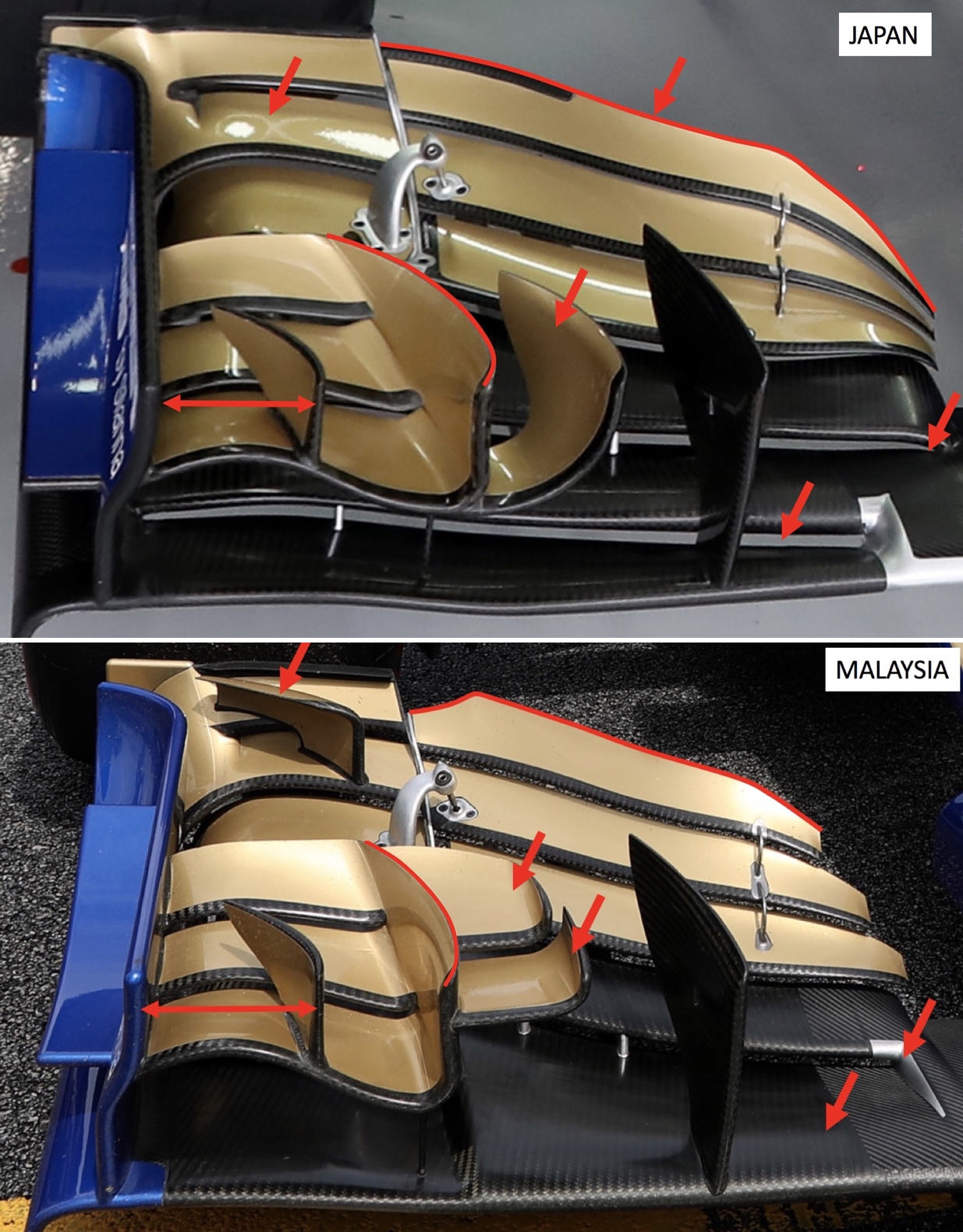 Elsewhere, the flap shape was revised significantly, with the team favouring a more angular outline, similar to that used on the C35 from Belgium last year, and also present on this year’s McLaren. The reader should be made aware that there have been multiple flap shapes run on the C36 so far this season, so it would not be correct comparing the new version with a specific old edition in detail.

This flap shape change has been made with the controlling of the inner wingtip vortex in mind – as air spills over to the underside of the wing, the inner flap area can be used to the control this rotating flow as it heads rearwards towards the bargeboards for optimal performance in terms of dissipating the front tyre wake.

Moreover, the cascade winglet has been revised, with the most outboard of the larger vanes being directed more aggressively outboard, while a new fin has been attached to it, replacing the old two element set-up which also used to be employed by Red Bull for many years.

Lastly, the small winglet atop the cascade elements has been moved very slightly outboard. All of these developments are aimed at altering the positioning and strength of the vortices shed with respect to the front tyre, in order to optimise the flow of air around it, for lower drag and crucially, less turbulence at the rear of the car.

Additionally, it should be noted that the winglet which was sat at the very rear of the wing has been removed, with its efficiency being significantly undermined by the more aggressive cascade set-up. Finally on the front wing’s main section, the leading edge of the mainplane has been revised, with the outer section being curved noticeably upwards near the endplate. 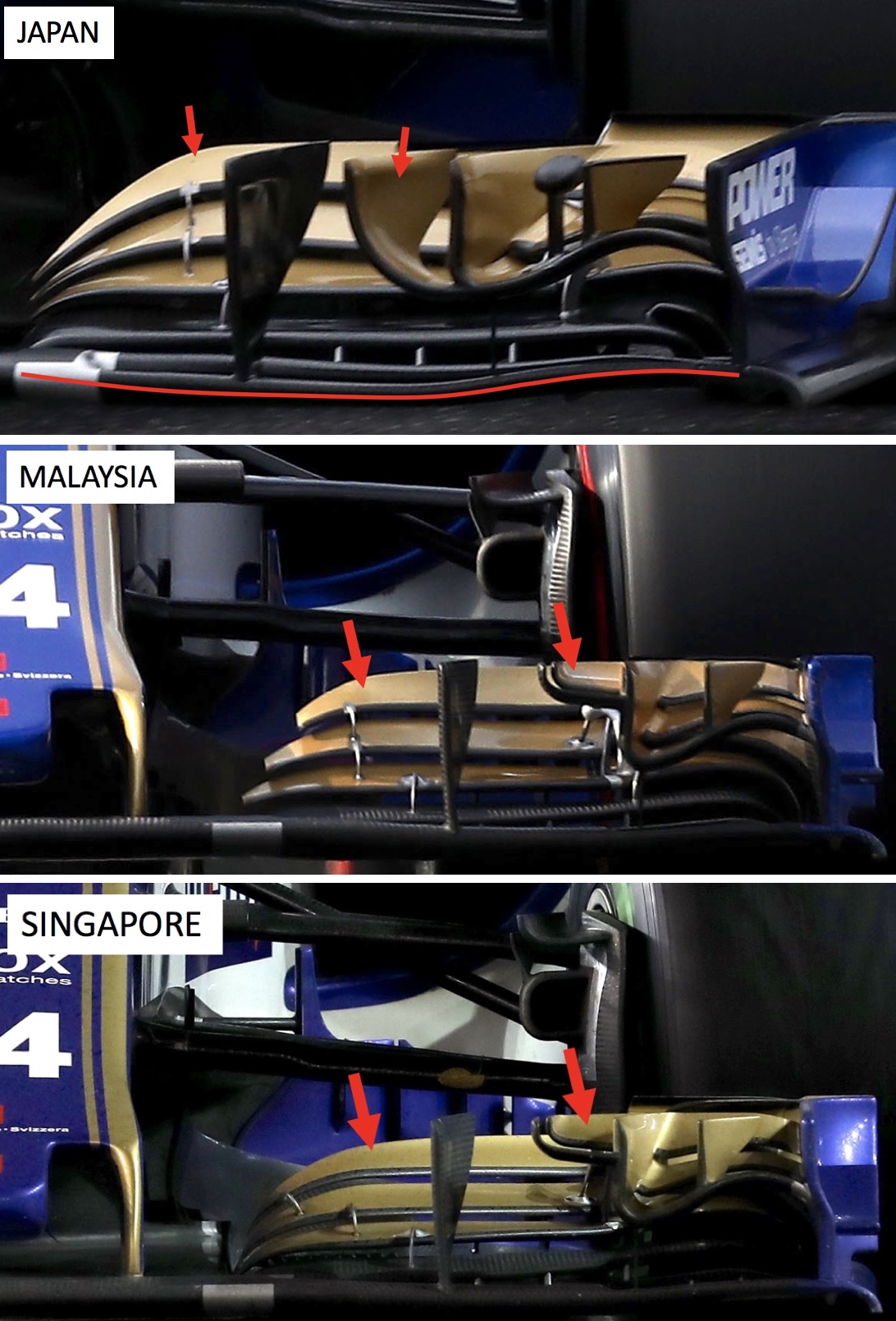 The benefit of this will be seen most in high-speed corners, as well as under braking, when the car is travelling quickly, and the front wing is flexing most along its outer portions.

As this happens, the outboard sections of the wing are forced closer to the track, reducing ground clearance, and potentially causing a ‘choking’ of the flow, with a significant loss in downforce resulting.

The new design prevents this, ensuring that the wing works closer to its optimum level under a wider range of conditions. This is similar in concept to the new front Mercedes introduced for the Malaysian GP.

Of interest is that Sauber remains the only team not to use an outwash tunnel on their front wing, despite using one last year – while this potentially raises front downforce potential, it harms the flow of air around the front tyre and consequently, rearward aerodynamic performance.

In addition, the front wing endplate on the C36 was altered for Japan, with the canard being lengthened, beginning and ending closer to the leading and trailing edges of the endplate’s main element. 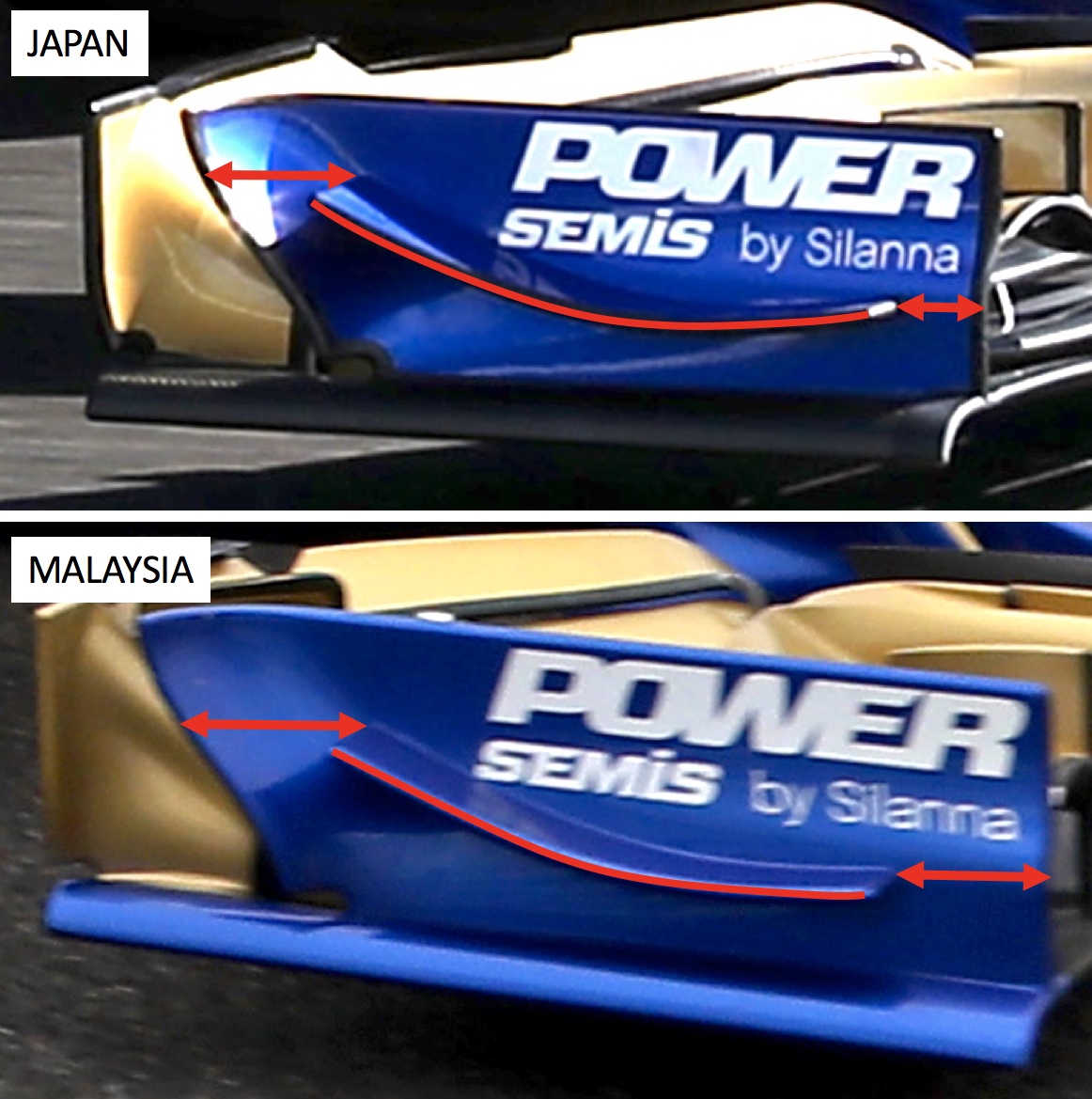 The purpose of this part is to shed a vortex which will work together with the outwash shape of the endplate to direct as much airflow as possible around the front tyre.

The new design will produce a stronger rotating flow, thanks to its longer chord, as well as the more cambered profile it uses. This will improve airflow to the rear of the car, although this is at the expense of an increase in drag.