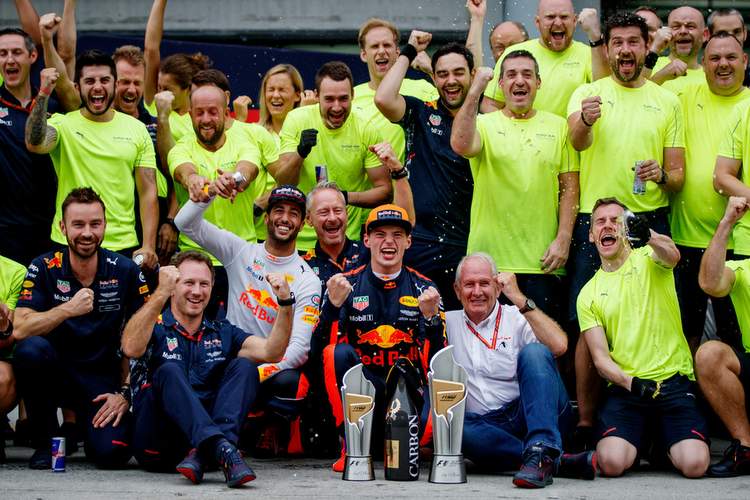 While the 20-year-old and his teammate Daniel Ricciardo are not championship contenders, they could yet be kingmakers.

How they fare in the remaining five races may play a big part in determining whether the drivers’ crown ends up at Mercedes or Ferrari, even if Hamilton looks the clear favourite.

Heading to the Japanese Grand Prix, the Briton is now 34 points ahead of Ferrari rival Vettel with a maximum of 125 points left to be scored, any further success for Red Bull would help tilt the title towards Hamilton unless he suffers misfortune.

The Mercedes driver is almost at the point where a string of second places would be enough for him to be world champion for a fourth time, even if Vettel were to finish first in every remaining race.

Assuming Hamilton keeps up his impressive run of 20 successive scoring finishes, Vettel needs to win repeatedly and be supported by teammate Kimi Raikkonen.

Even then, three Ferrari one-two finishes in succession would still see Hamilton lead the championship into the penultimate round if he finishes third every time.

Were Verstappen and Ricciardo to become the filling in a red and silver sandwich, finishing behind the two Ferraris but ahead of the Mercedes pair, then that would change everything.

That may just be wishful thinking on the part of Ferrari fans stunned by their team’s recent implosion – both drivers colliding at the start in Singapore and then handicapped by power unit problems in Malaysia.

Few will need reminding that Hamilton has won the United States Grand Prix, a race yet to come, five times in the past six years and ended 2016 with four wins in a row. Yet Mercedes, winners of nine out of 15 races so far this year, are alert to the danger.

“Probably if you look at the real pace today, it would have been P5. And that is worrisome,” team boss Toto Wolff said after Hamilton finished second without ever challenging Verstappen.

“On paper the Ferrari is the fastest car, followed by the Red Bull and then us,” the Austrian had observed after qualifying.

Had Raikkonen lined up in second place in Malaysia, rather than retiring before the start, and Vettel not been sidelined in qualifying, there is every chance that Ferrari and Red Bull could have kept Hamilton off the podium.

“There are some real big problems that I can’t really explain to you,” Hamilton said after a race. “I don’t know which one of these next races is going to be good for us, which races are not, but we’ll do everything we can to try and stay ahead.”