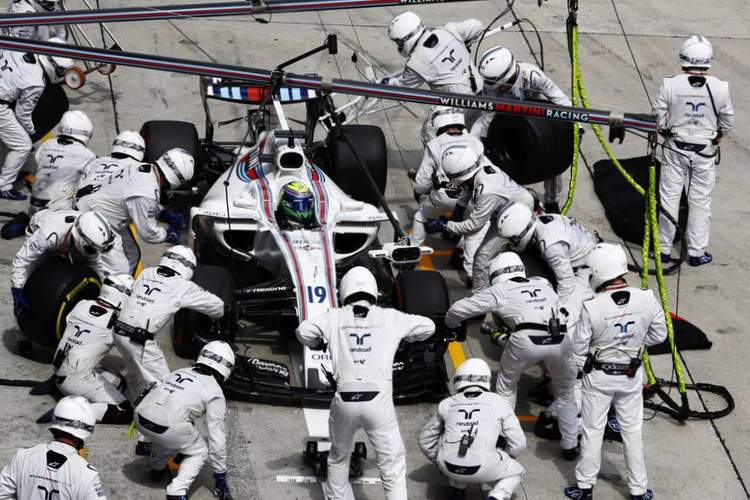 The wheels appeared to be falling off Sebastian Vettel’s championship campaign in Malaysia, where a power unit problem in qualifying prevented him from setting a time, forcing him to start from the back of the grid.

Vettel needed to ensure Hamilton didn’t outscore him by more than seven points to maintain a realistic shot at the title, and a stunning recovery drive to fourth, plus Lewis Hamilton’s second-place finish behind Max Verstappen, guaranteed just that. 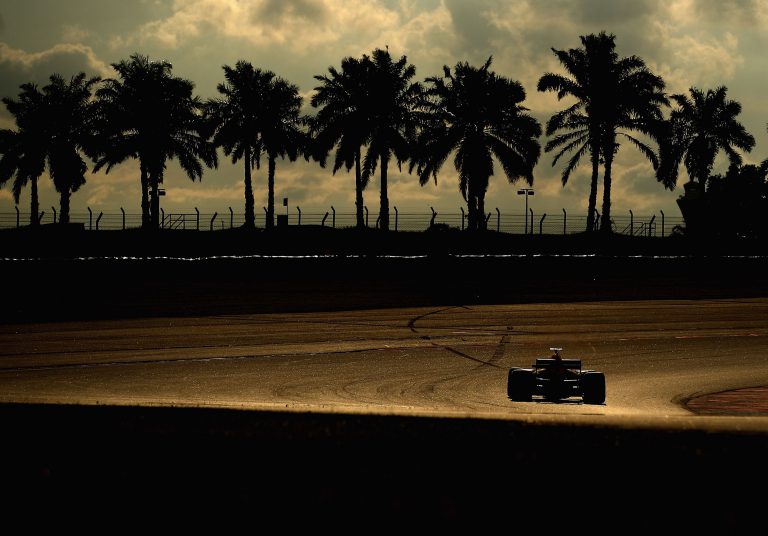 With little long-run data collected through two truncated Friday practice sessions, the principal factor in tyre strategy would be temperature. If the track were too hot, the supersoft tyre, worth around 0.7 seconds per lap over the soft, would overheat, shortening is useful life and limiting its pace. As it transpired, however, track temperatures on Sunday, after heavy rain in the hours before the race, remained below 40°C, enticing teams into one-stop races.

Despite substantially improving its pace between practice and qualifying, Mercedes remained the third-quickest car on Sunday, and Max Verstappen wasted no time slicing past Hamilton on lap four, claiming the lead that would deliver him victory.

Hamilton opted not to fight too hard, recognising not only that his car wasn’t up to the challenge but also that he needed to score points only against Vettel.

In this regard Bottas, though painfully off the pace, played a solid team game nonetheless for Hamilton by keeping Ricciardo bottled behind him for nine laps, after which the Australian was too far behind the Briton to attempt to challenge for second place.

Though this was the podium order — Verstappen-Hamilton-Ricciardo — the battle for third went down to the wire. 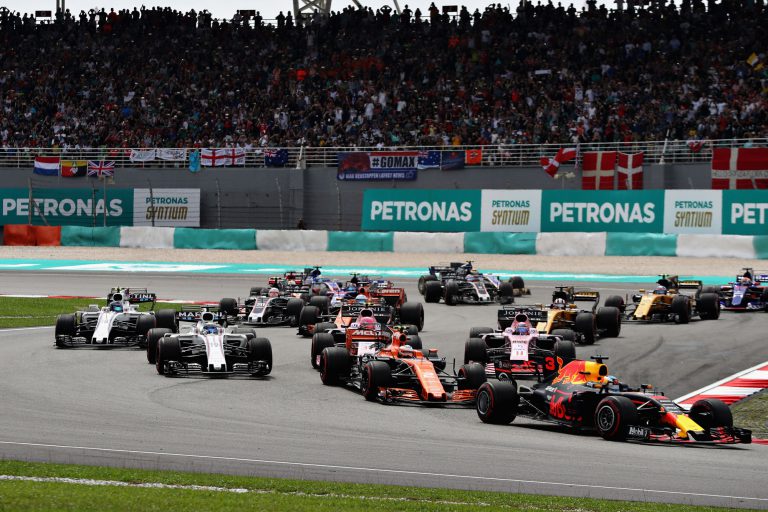 Sebastian Vettel, with nothing to lose from last on the grid, started the race on the soft tyre, meaning he would be on the supersoft tyre when his rivals were on softs at the end of the race, giving him a pace advantage. With minimal degradation on the day, having a lighter car in the second stint meant he was getting an extra two second of pace out of the supersoft tyre compared to those who used it in the first stint.

The first stint worked a treat for Ferrari, with Vettel up to fifth by lap 21 thanks in part to decisive passes and midfield cars pitting early. Now behind Bottas, Ferrari opted to use the undercut, shortening the first stint but avoiding the need to waste time overtaking.

Daniel Ricciardo made his stop on lap 30 — he was the last frontrunner to do so — after which 14 seconds separated him from Vettel. The Australian was reeled in at around one second per lap, and the pair sparred until lap 49, when the aggressive driving finally took its toll on Vettel’s tyres, forcing him to accept fourth place.

Was it the optimum strategy? Arguably Vettel should have run a longer first stint on the softs — Esteban Ocon got 53 laps out of the yellow tyre — but he would have had to pass Bottas, after which Bottas could have himself deployed the undercut and forced Vettel to pass him a second time.

The only thorn in Vettel’s side was Fernando Alonso, who held him up between laps three and nine, costing him around one second per lap. Perhaps with a bit of extra tyre life Vettel would have been able to slice past Bottas and out of undercut range in the pit stop window. 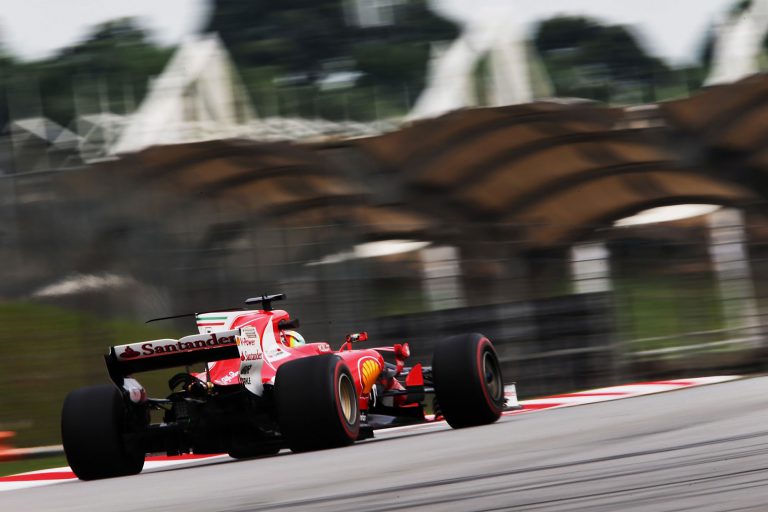 Esteban Ocon does a Sergio Perez

This was a strong drive from Esteban Ocon, coming from last on lap three to P10 in a closely matched midfield.

Switching from the supersoft to the soft on lap three and expecting to make it to the end was bold, and though the soft is perhaps the season’s most versatile tyre, Ocon’s Perez-esque conservation drive mustn’t be discounted. Hülkenberg attempted a similar strategy from lap nine but found none of the pace, ultimately pitting a race-destroying second time on lap 50. 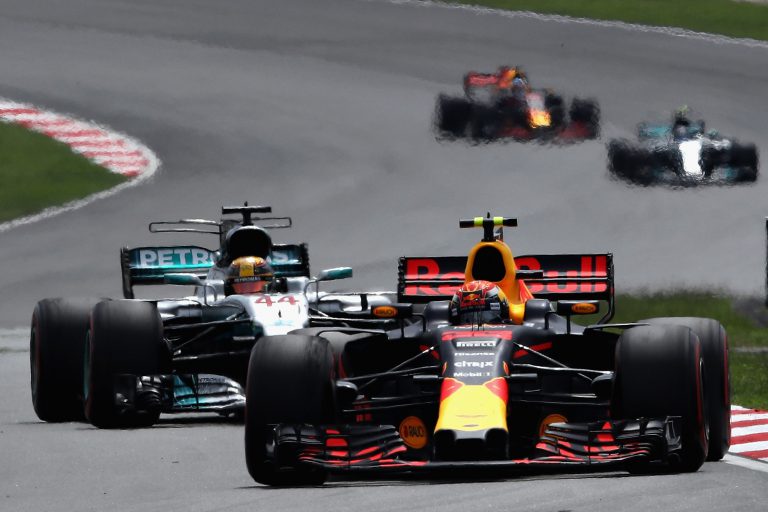 Perez makes his own way

Sergio Perez, however, didn’t even need to worry about the midfield, jumping two places to sixth on the first lap. This enabled him to go long on his first stint without getting caught up in traffic — Fernando Alonso, for example, attempted the same strategy, but he lost 20 seconds relative to Perez during the first stint cutting through the midfield, meaning his stop dropped him straight back into the action. Perez, however, having built a big enough gap to the midfield before his stop, lost no places for his tyre change, securing him a commendable sixth place.

Williams drivers Lance Stroll and Felipe Massa finished strongly in eight and ninth, but the pair were almost 10 seconds behind McLaren’s Stoffel Vandoorne at the chequered flag having accidentally allowed him past on lap 13.

Stroll led Massa before the pit stops after jumping him at the start, but it was Massa who was stopped first when the team became spooked that Kevin Magnussen was in undercut range when the Dane made his sole tyre change.

The result was that Massa ended up ahead of Stroll, so the team attempted to switch the pair back for the sake of fairness — but as they engineered the swap, Vandoorne charged out of the pits and jumped both, earning himself his second seventh-place finish but losing Williams a potential extra four points. 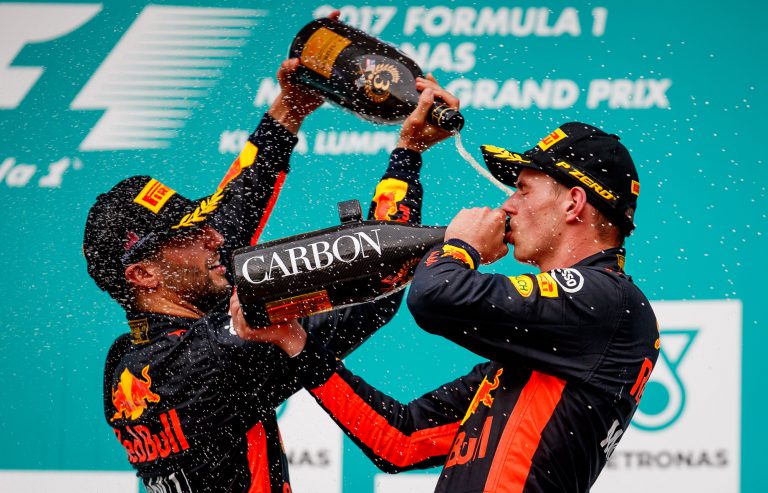 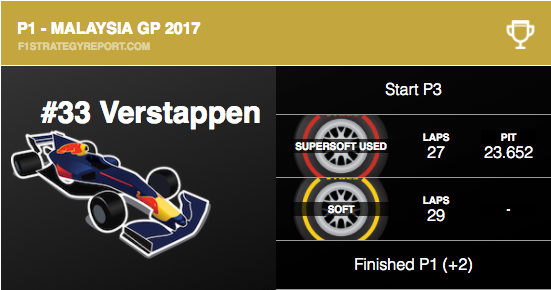 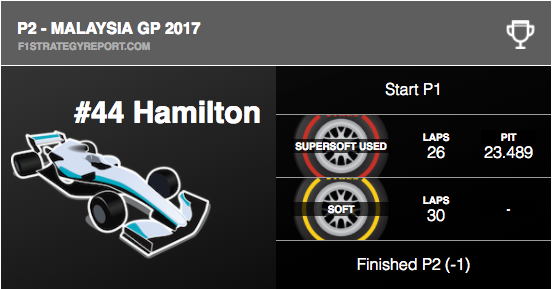 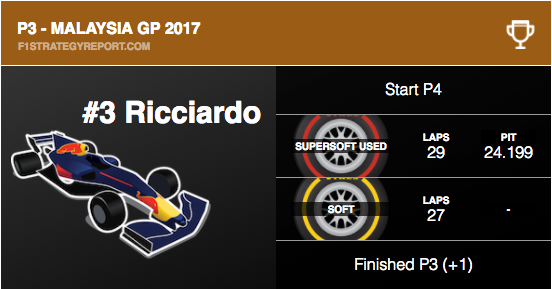 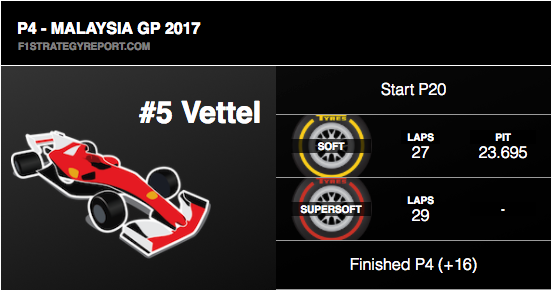 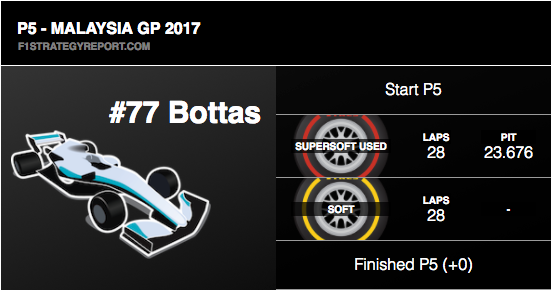 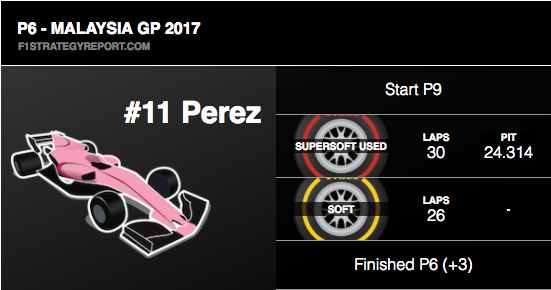 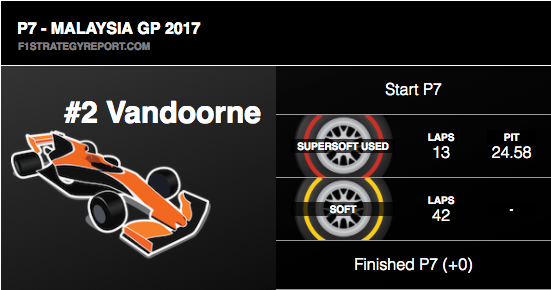 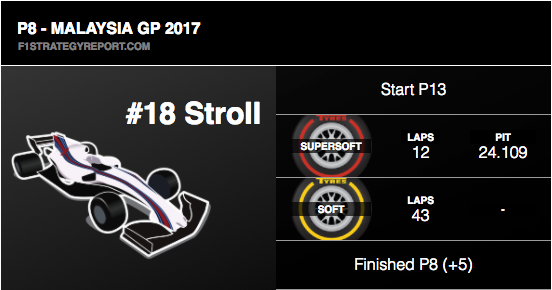 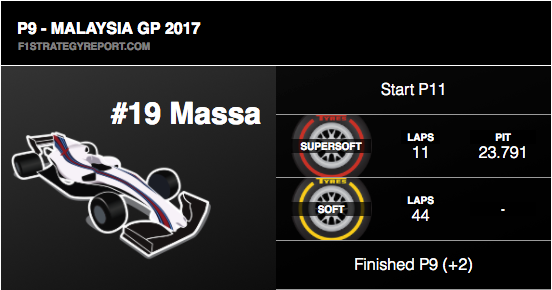 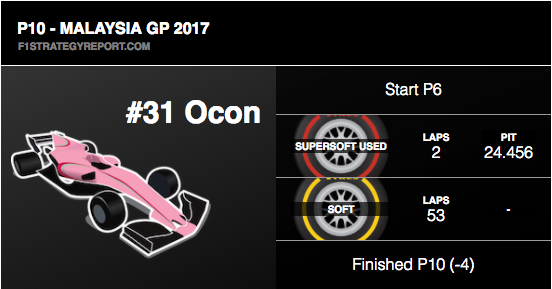 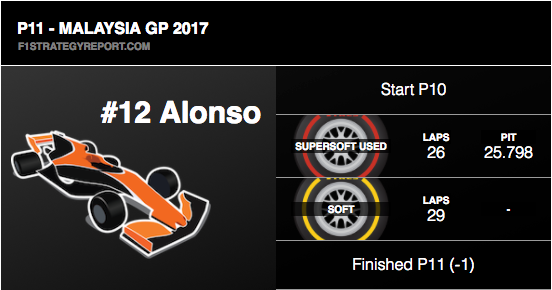 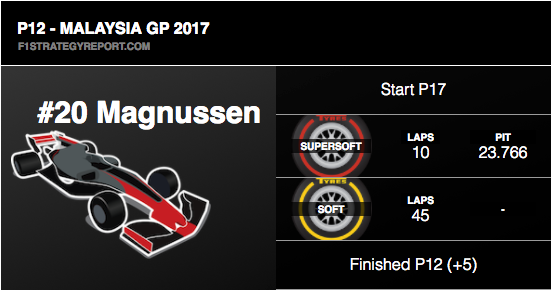 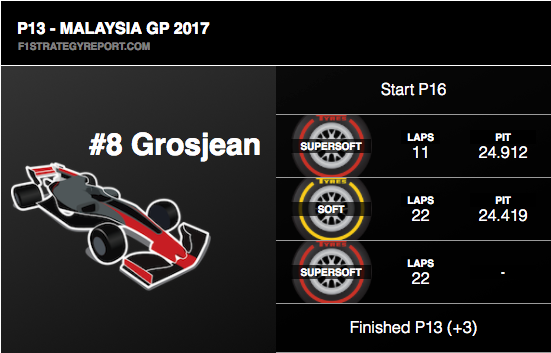 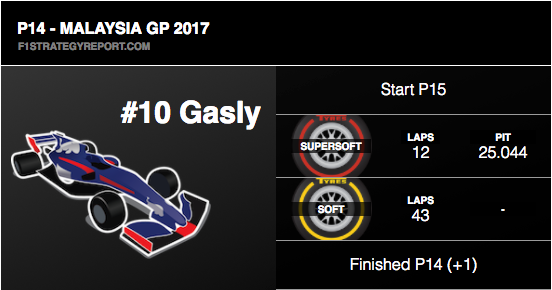 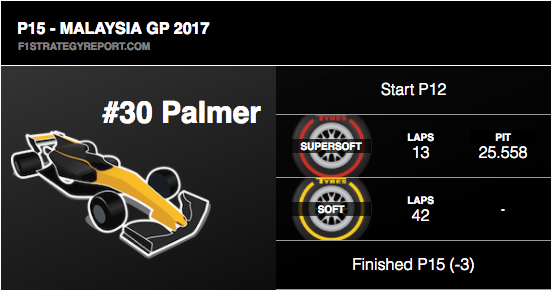 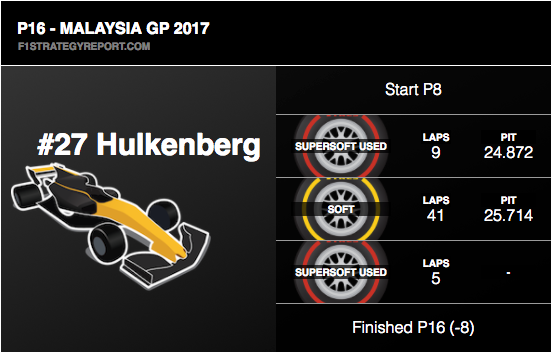 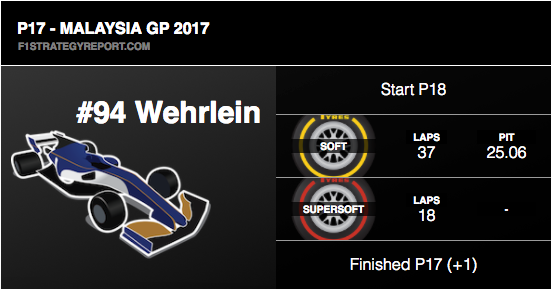 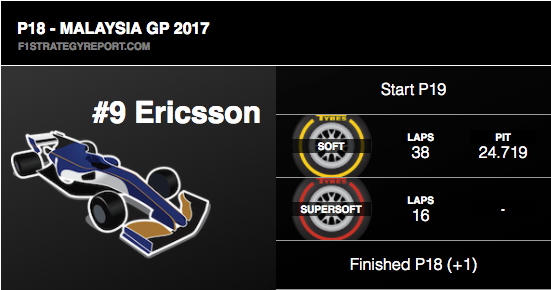