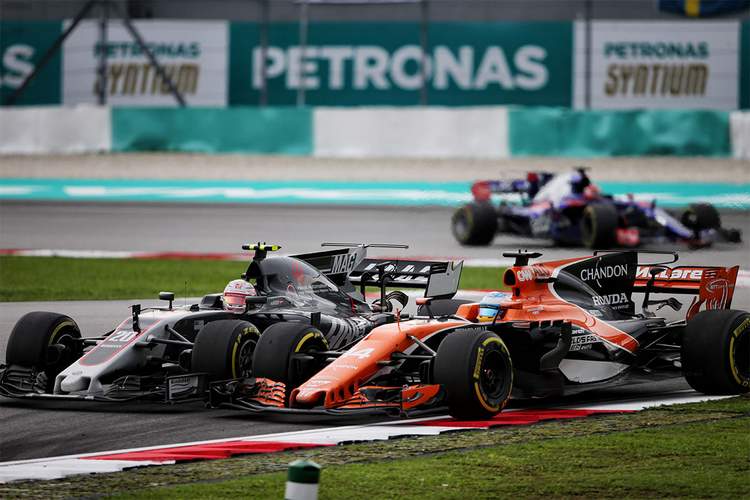 Through Turn 1 Sepang, the Haas driver squeezed Alonso onto the dirt, but the Spaniard fought to claim the position back as they exited the Turn 2 complex by forcing the Haas wide. However the McLaren driver made his anger known over the radio.

“What an idiot! Hulkenberg was right,” exclaimed Alonso over his team radio, with reference to a similar incident during the Hungarian Grand Prix where Hulkenberg approached Magnussen in the media interview pen and the following exchange took place:

After the race in Malaysia, Alonso added, “For his driving, we more or less agree with the other drivers, it’s 19 to one.”

Also not impressed by the Dane’s antics was 1997 F1 World Champion Jacques Villeneuve who did not mince his words when he told Ekstra Bladet, “There is a big difference between dirty driving and hard driving. Dirty driving is when driving with zero respect for your fellow drivers.”

“There is a trend with the younger drivers because they are not punished for it in Formula 3 and Formula 4. They really do stupid things, then they reach Formula 1 and think it’s a video game.”

“It’s just a matter of respect. You should not do to others what you do not want them to do to you. As simple as that. You have to make it difficult, but give them a chance. Do not put them in the wall or cut them off, so the other must slow down to avoid a collision.”

“You can visually see what the thought process is: I want to push him off the track. That’s wrong,” insisted Villeneuve.

Haas team chief Guenther Steiner said, “Alonso is a very charismatic and very skilled driver. A hard dog. And if someone confronts him, then that’s how he reacts.”

“I think they both pushed it to the limit, and fans want to see that. They did not really collide with each other,” he added.

Neither Alonso or Magnussen scored points on the day, the pair finishing 11th and 12th.

Big Question: Is Kevin a dirty driver or a hard driver?