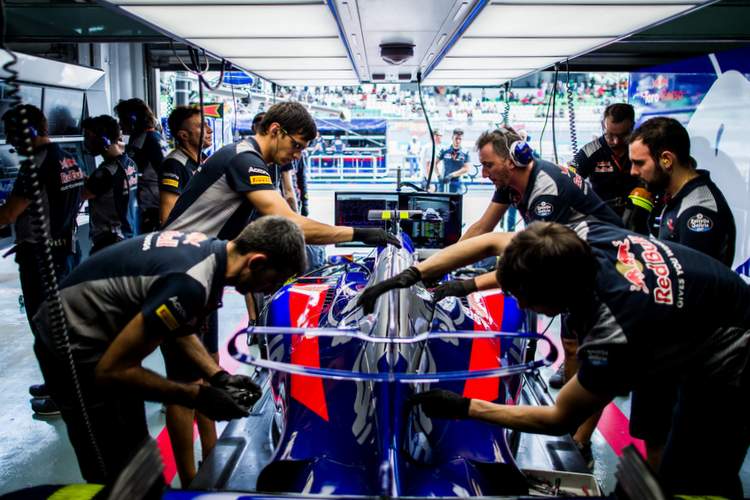 The Malaysian Grand Prix saw many teams introduce updates to their 2017 cars in what will probably be the final major push from most outfits, as the focus of development is increasingly directed towards next year’s challengers.

That is not to say there won’t be more upgrades of significance, just that they will be as much to gather information on 2018 concepts as to improve the lap time of this year’s cars.

As part of a larger upgrade package to many areas of the W08, Mercedes introduced new barge-boards in Sepang. Two of the fins placed on the part’s footplate have been reshaped, both with slanted leading and trailing edges, resulting in a larger chord pair of devices – they are also directed more aggressively outboard than previously. 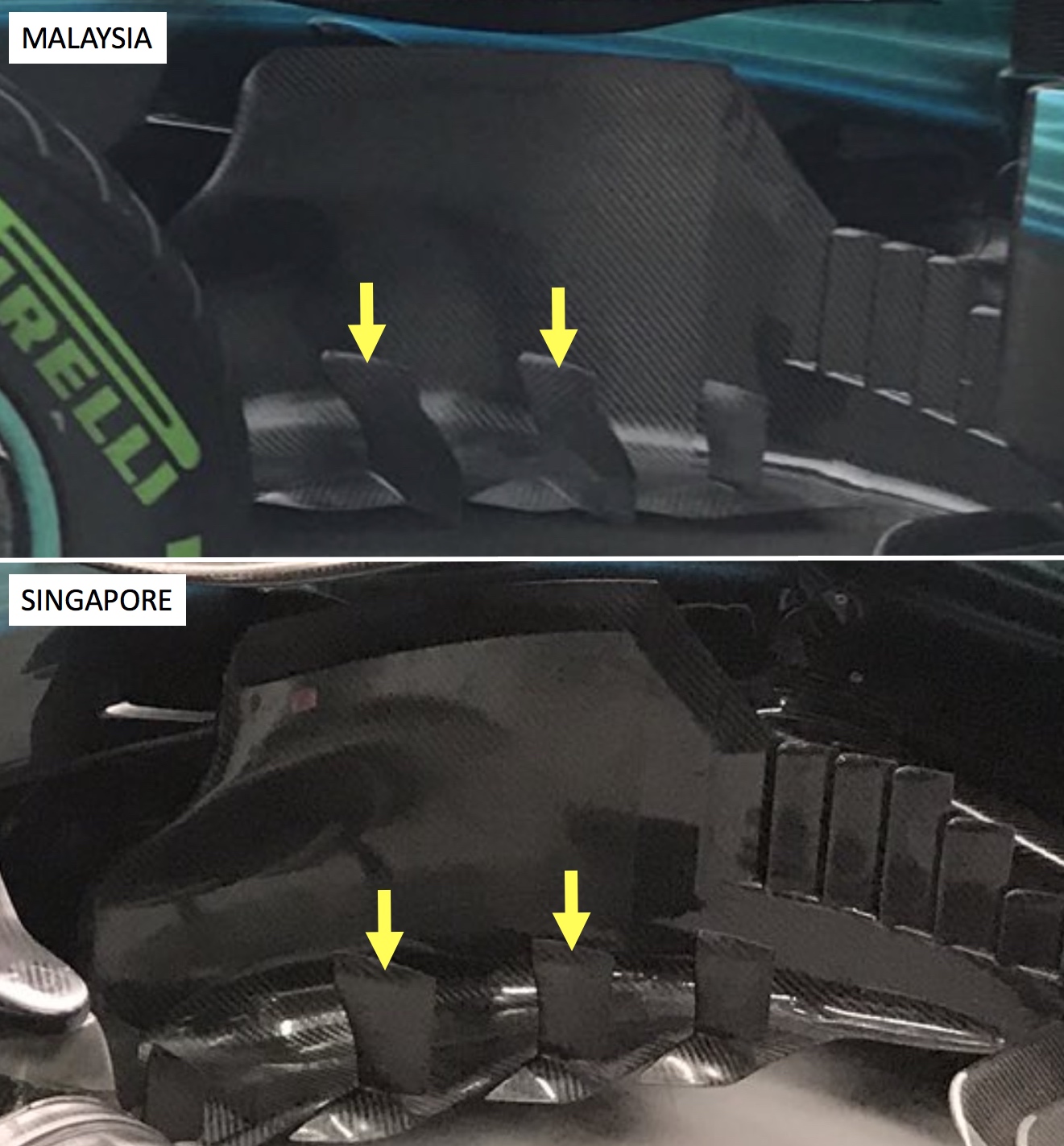 These developments are aimed at improved rearward aerodynamic performance by moving the tyre wake as far from the car as possible, not only by their new shape, but also by the stronger vortices shed at the top and bottom of these fins as a larger pressure differential is set up either side of them.

Ferrari continued its rapid development pace in Malaysia, introducing significantly revised barge-boards, as well as a new airbox. It appears as if the Scuderia is pushing harder than all other teams on its 2017 car, in a bid to maintain its championship challenge. This comes at a cost to its 2018 performance, but given the rules stability for next year, this downside is reduced somewhat.

Looking first at the new barge-boards, the main difference to the old design concerns the addition of a slanted element ahead of the main part. The base of this new device sits further outboard than the top part as the team looks to integrate the airflow structures it produces with those of the existing design.

It is also very clearly directed outboard, the result of which will be front tyre wake dissipation, mainly by the vortex shed due to the pressure differential either side of it. 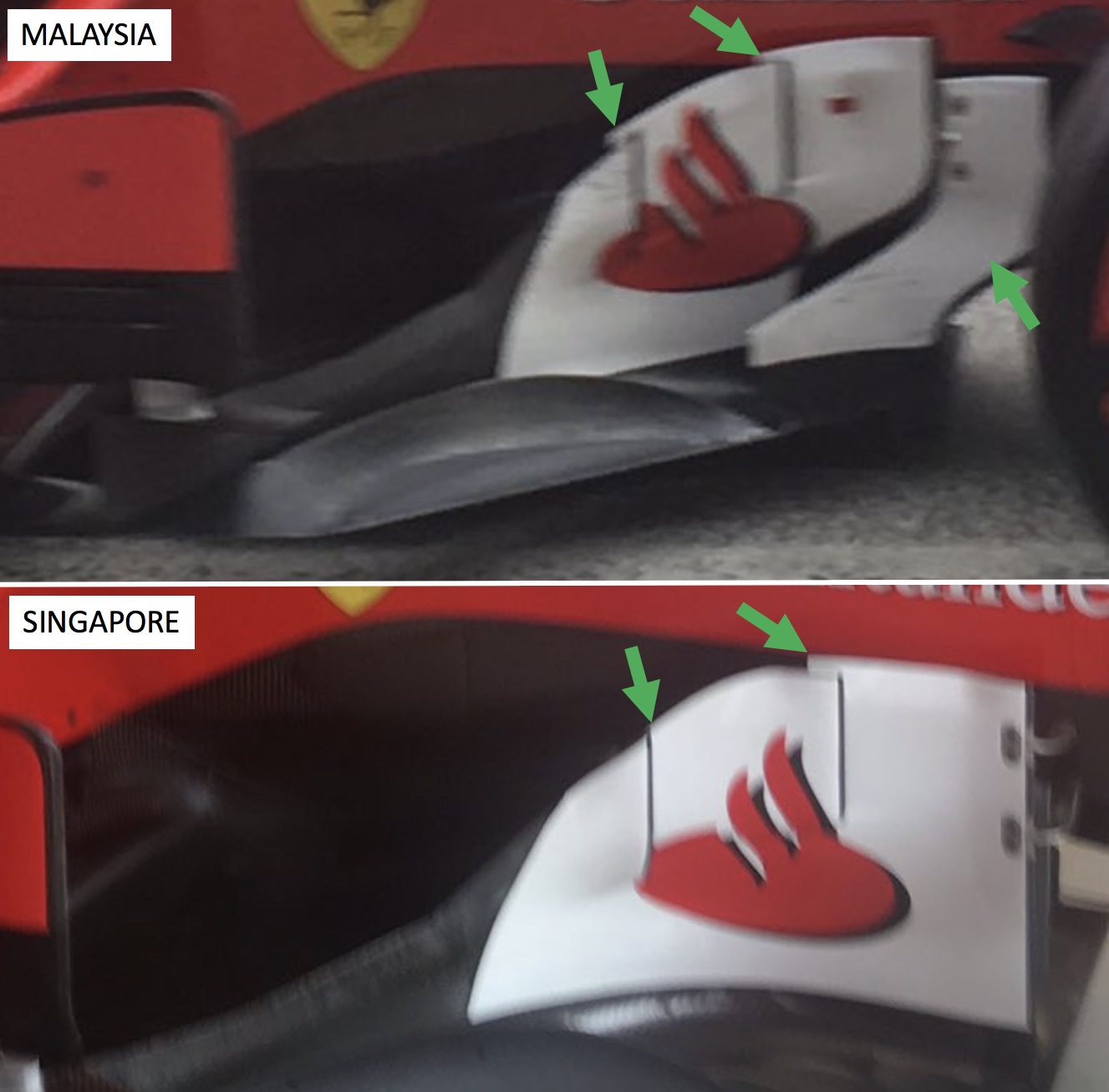 The top half of the new, forward element is perhaps the most interesting area of the revised barge-board set-up – from the above view, the part appears to have some camber, the result of which will be a pressure differential being set up and a vortex being produced.

This could have been achieved by creating a greater number of slots in the main barge-board, but this would have weakened the vortices shed by it, lowering its effectiveness in directing around the sidepods, as well as diverting the front tyre wake away from the rear of the car.

Also note that the heights of the three vertical mini-elements making up the main barge-board have been altered, especially at their trailing edge, in order to optimise the positioning of the vortices they shed for improved rearward aerodynamic performance.

Another significant development to the SF70H came in the form of a new airbox design, which features two ‘ears’ either side of the main intake, with the overall geometry now being far wider, and resembling the designs on the Mercedes-powered cars, as well as the Renault.

Given the timing of this update, the old airbox bodywork has been maintained within the new design, making it look rather bulky – this is something that will surely be ironed out for 2018 if the team chooses to continue with this design philosophy. 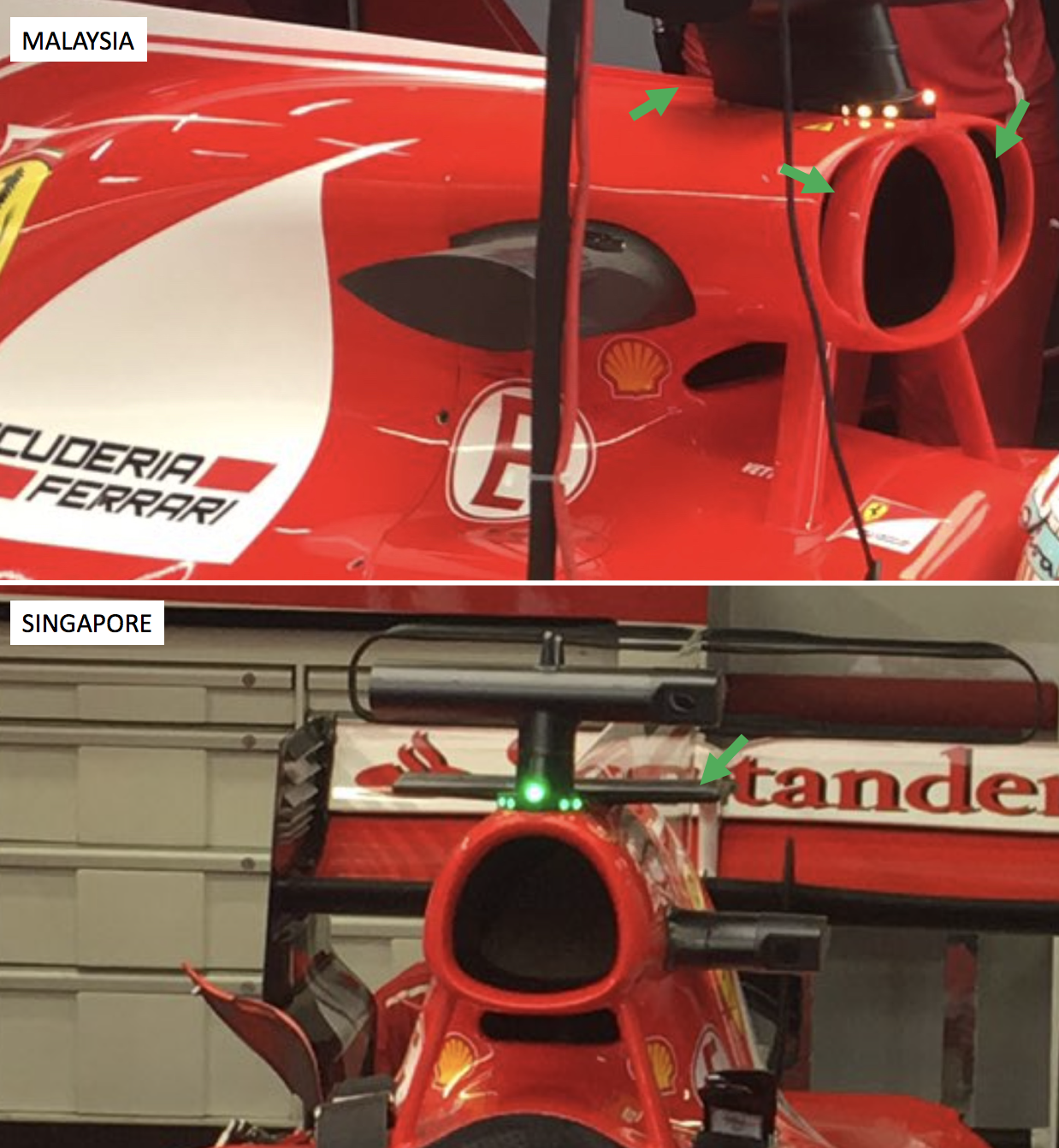 The purpose of the new design is to provide certain coolers for the power unit with more airflow, although whether this was designed specifically for the new-spec power unit run by Vettel in the race is questionable given that Raikkonen ran the update despite using an older power unit. The benefit of this will be the availability of more aggressive engine modes in the race for a prolonged period, without overheating.

An added benefit may be that the rear cooling outlets can be closed a little, and indeed, there was a small reduction in size for Sepang versus Singapore, whereas all other teams ran the same, if not bigger outlets. Finally, the fin at the top of the air inlet, which produced a vortex to clean up airflow behind the bulky airbox area, was removed for Sepang, with the wider intake design perhaps limiting its effectiveness by disrupting the airflow incident upon it.

Toro Rosso introduced a major upgrade package to its STR12 for the Malaysian GP, although ultimately, it did not work as well as the team expected. There are a couple of potential reasons for this. Firstly, a wet FP1 reduced the time available for the team to test the new parts and alter the car’s set-up accordingly.

Secondly, Toro Rosso has, for a few years now, favoured the philosophy of introducing a few significant development packages during the season, as opposed to multiple, smaller ones, which can result in a lack of understanding about which parts are working well and those which are under-performing.

The biggest changes were to the front wing and nose – firstly, the upper flap now features a dip in its centre, reducing the angle of attack of this portion of the wing. While this reduces the maximum downforce producing capability of the device, its increases the likelihood of airflow attachment to the underside of the part. The same result was achieved along the inner portion of the wing in Spain by introducing a second slot into the main plane. 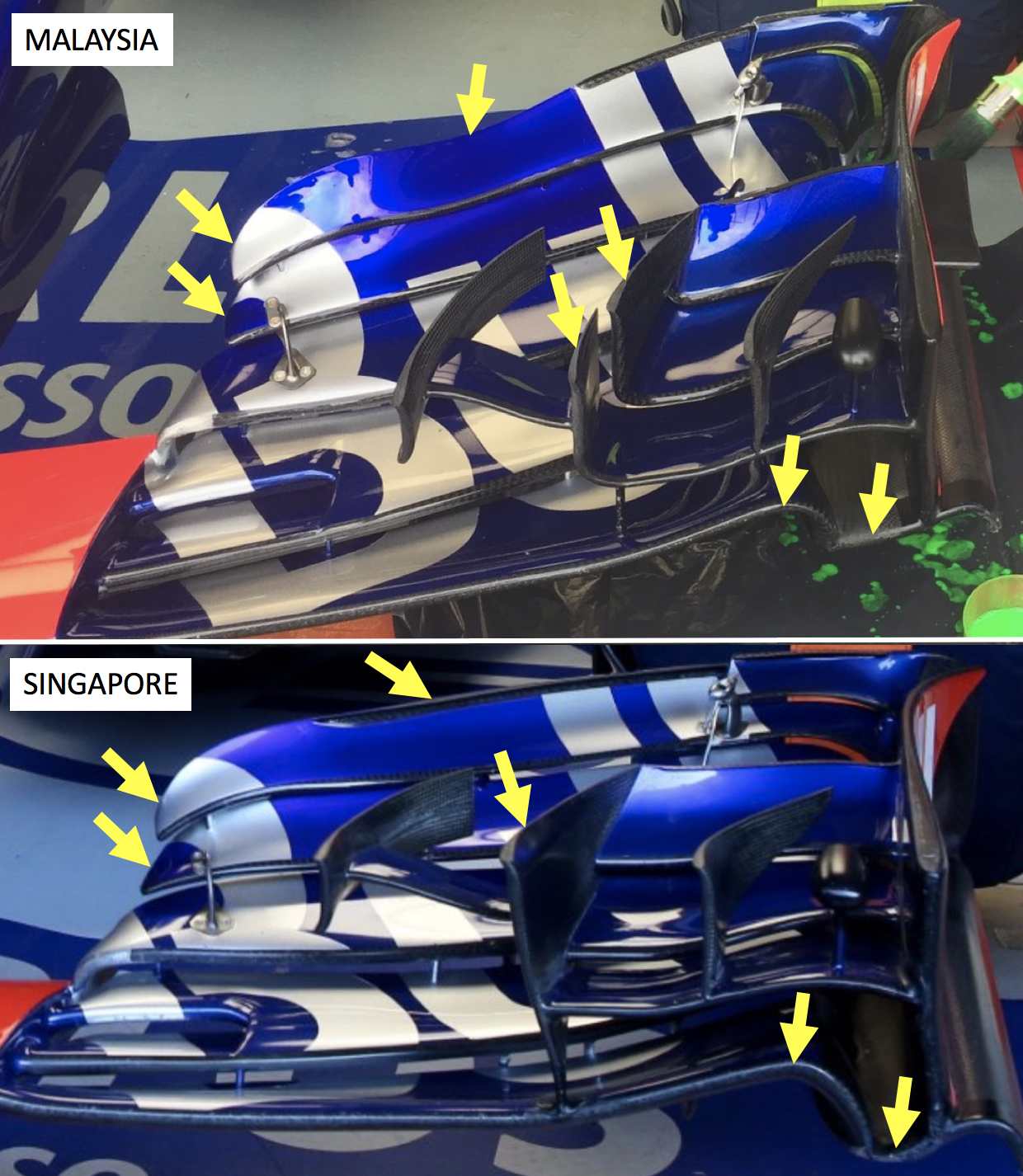 Elsewhere, the gap between the arch, now smaller, and the end-plate was increased noticeably – in fact, Toro Rosso also moved between these two philosophies last season. Increasing this gap allows more airflow to enter the area, which can then be turned outboard by the out-wash tunnel around the front tyre. In this regard, the arch can be considered as a secondary end-plate.

Another purpose of the arch is to control the wingtip vortex along its underside, and direct it outboard such that it will pull as much airflow as possible around the front tyre. Its more inboard position should increase the effectiveness of the vortex now that the arch is more aggressively turned outboard along its rearward part.

Furthermore, the cascade set-up has been heavily revised, with the outer R-vane being split into two parts, both of which have a wing-shaped vertical cross section. The result of this will be the production of two vortices, both directed outboard, but to differing degrees, aimed at lowering the amount of air heading towards the front tyre.

Meanwhile, the base of this vane has been streamlined, with the old design not really affecting the flow while being larger than necessary. Further back, the pre-barge-board element on the STR12 has been revised, with the introduction of a series of vortex generators, which seal the underside of the floor from turbulent air. 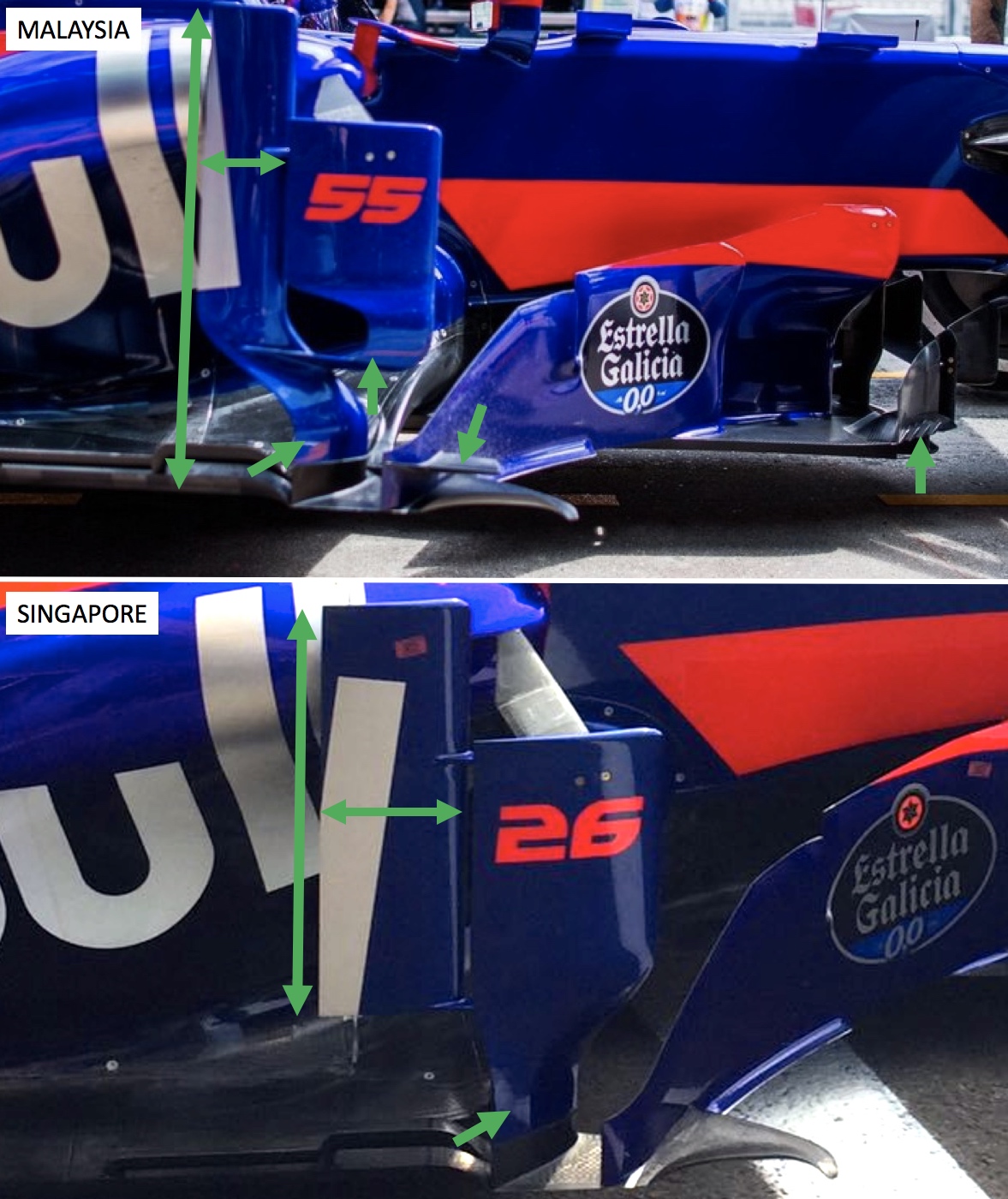 In addition, the rear of the barge-boards as well as the airflow conditioners have been developed. Firstly, a new, forward-facing, element has been added to the trailing edge of the barge-board, whose camber will result in the production of a vortex, which will attack the tyre wake. Just behind this area, the vertical airflow conditioners have had their geometry revised, as the team looks to optimise the attachment of airflow to the sidepods, as well as minimising disturbance to the rear of their car by turbulent air.

After upgrading its front wing just two weeks ago in Singapore, Haas made further changes to this part for Malaysia. The new design focuses on the flaps’ inboard areas, which have been cut down, much like on the Renault and McLaren, for lower drag.

The downside of such a development is that the vortices shed at the flap tips are less controlled, and also slightly further outboard, as they head rearwards towards the barge-boards – both of these by-products will affect rearward aerodynamics, especially with regards to controlling the front tyre wake. 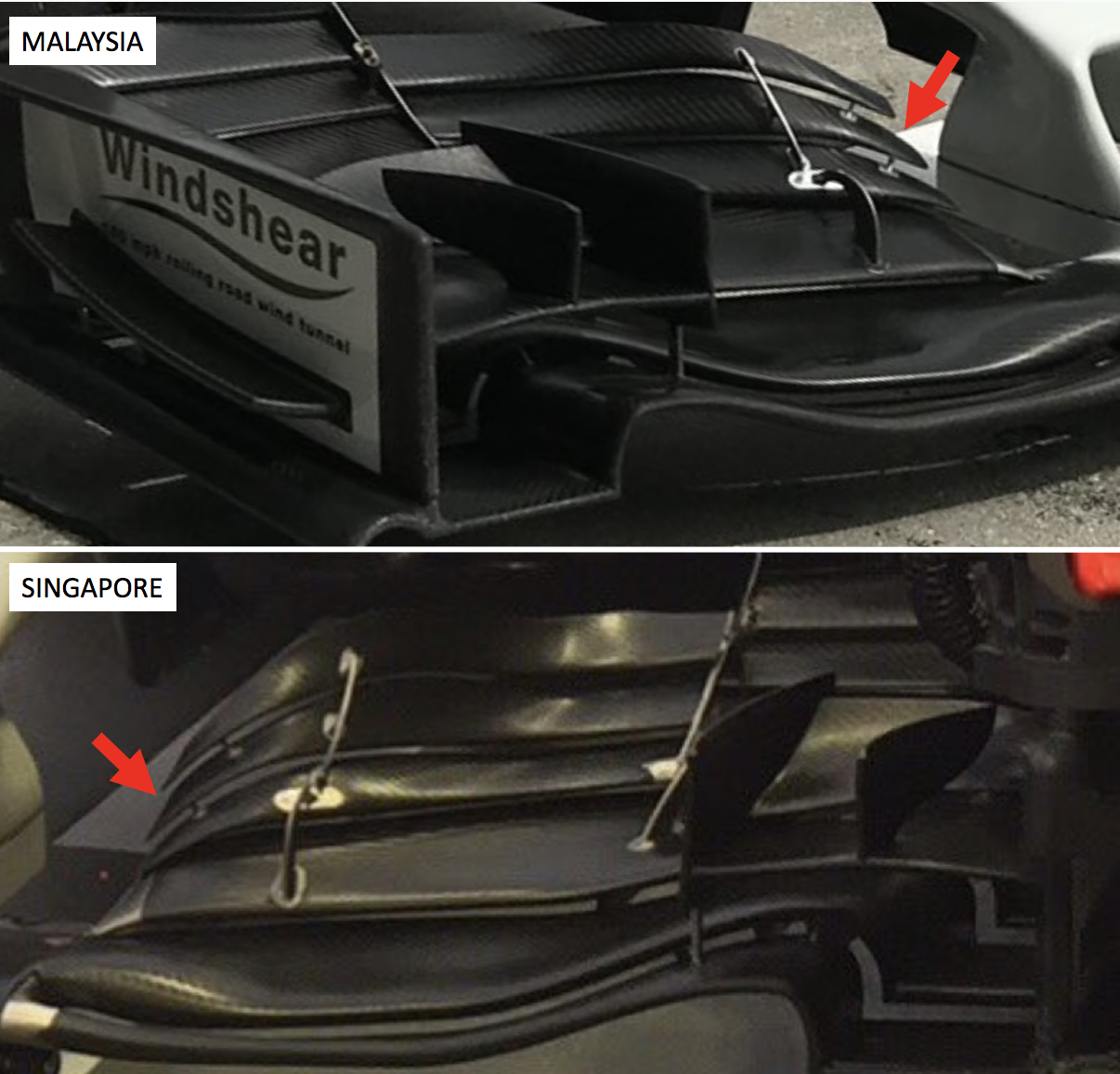 However, the team clearly believed that this loss in performance, compared to the Hungary/Singapore wing, was more than outweighed by the lower skin friction drag and vortex resistance at a track like Sepang – this wing may be used at Suzuka as well, given the similarity in track layout.

The lower skin friction is self-explanatory, while induced drag is decreased by the narrower flaps, which lower the width of pressure differential that can contribute to the vortices’ strength. The actual flap chord was unchanged, meaning that downforce, largely produced in the central section of the wing, remained fairly high.

After a couple of quiet races in terms of car development, owing to the team’s delayed 2018 PU decision requiring additional resources to be put on the MCL33, McLaren restarted its 2017 development programme with revised barge-boards in Malaysia. There were insufficient copies for both cars to run the new pieces, but despite the next race being only a week away, the team is confident that this will be rectified for Suzuka.

There are two significant revisions to the barge-boards – firstly, the addition of a smaller element outboard of the main one. This device will deflect airflow outboard thanks to its shape, but also as a result of the vortex it sheds, in order to direct the front tyre wake as far from the rear of the car as possible, improving rear downforce at the expense of some straight-line speed. 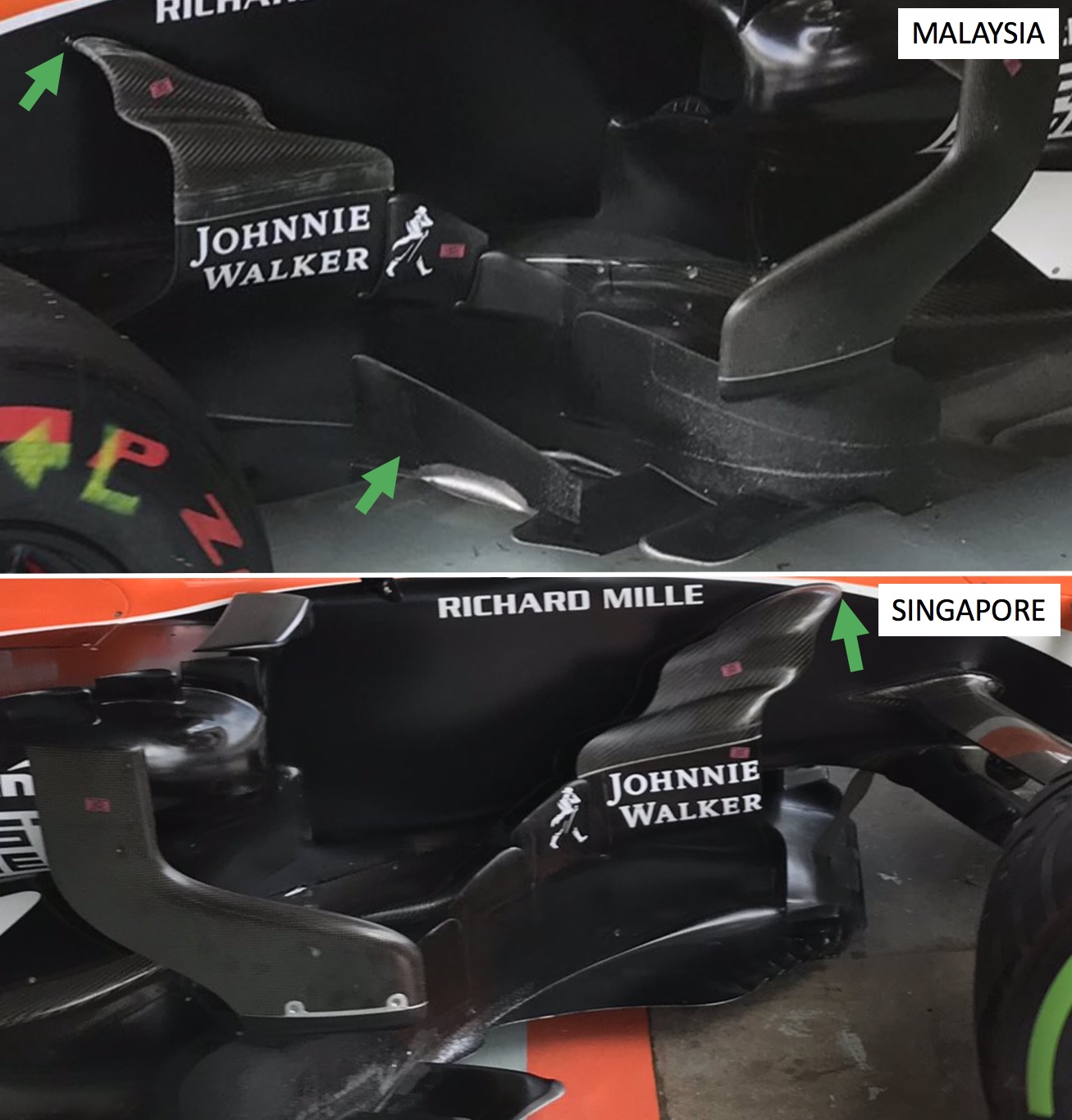 Secondly, the attachment of the barge-board to the MCL32’s chassis is now lower down, although its down-wash geometry is broadly unchanged – it just the vertical kink in the attachment which has been shortened. The purpose of the down-wash orientation here is not entirely clear – it could direct air that would otherwise flow over the top surface of the sidepod into the air intake for improved cooling.

Alternatively, with the lower position of the new design, air may be directed just beneath the intake, into the undercut area, energising the boundary layer here to ensure that flow remains attached to the sidepod’s surface for lower pressure drag.