Vettel: Come on Alonso I thought you were better than that 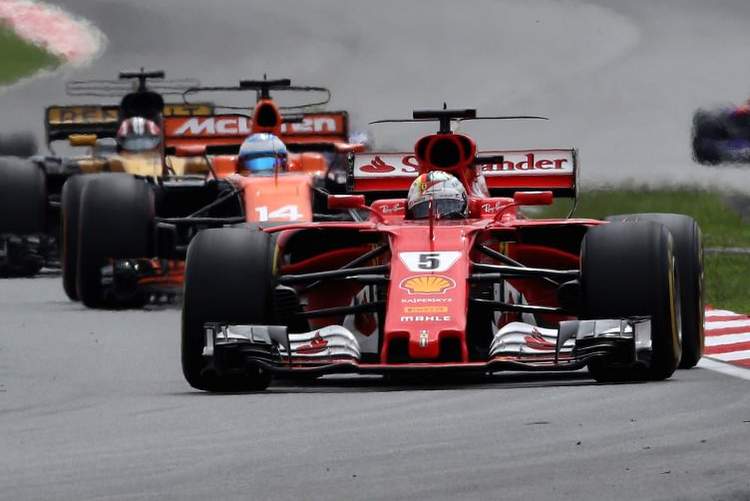 Sebastian Vettel was on a charge from the moment the lights went out to start the Malaysian Grand Prix, a man on a mission he scythed through the field from 20th on the grid, to the point that in the final stages of the race he was lining up an attack for third place, until Fernando Alonso’s McLaren got in his way.

With the third placed Red Bull of Daniel Ricciardo firmly in his sights the Ferrari driver was preparing to make his move but Australian cleverly got ahead of Alonso, who was being lapped, but Vettel took a tad longer to get by with no help at all from the Spaniard.

Vettel let his feelings be known over the team radio: “Come on Alonso I thought you were better than that.”

After being baulked Vettel appeared to lose his fire and settled for fourth place.

But after the race he continued to complain when he told reporters, “Fernando decided to jump in the middle. I think he said when he left Ferrari that he was a Ferrari fan but today he didn’t act like one.”

Alonso who endured a lacklustre race, on his way to 11th, brushed off the comments, “For me it looks OK but we’ve heard ‘blue flags, blue flags’ from him before so it was just one of those.”

Despite this Vettel achieved serious damage limitation on the day by turning 20th on the grid to fourth place by the time the chequered waved at end the race.

He heads to the Japanese Grand Prix 34 points behind championship leader Lewis Hamilton, but it could have been much worse.

Big Question: Did Fernando ruin Seb’s chance of a podium?