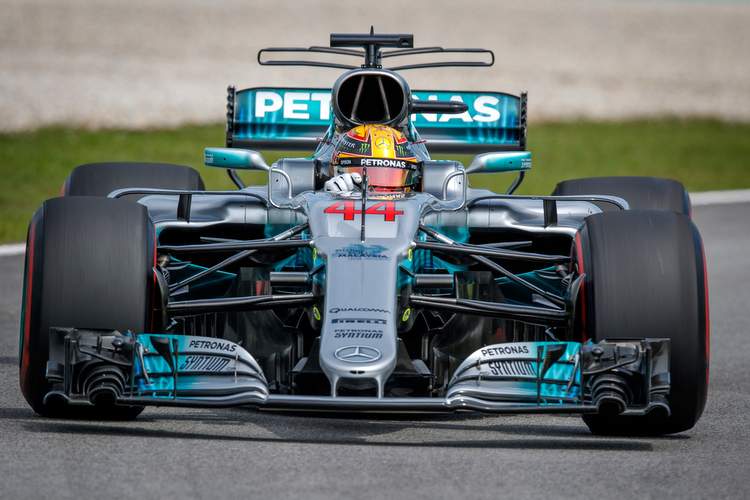 Lewis Hamilton edged Kimi Raikkonen in a tense qualifying session for the Malaysian Grand Prix, while Sebastian Vettel’s Ferrari suffered a turbo issue that will see him start the race at Sepang from the back of the grid.

Mercedes driver Hamilton smashed the qualifying lap record as he powered to his 70th career top spot start, he did the business with his first flying lap of 1:30.076 in Q3. Raikkonen, with Ferrari hopes on his shoulders, pulled out all the stops but was only good for second place, albeit 0.045 of a second shy of the top time.

Drama started early with Vettel, with a new engine bolted on to his Ferrari, reporting a turbo issue on his first flyer before returning to the pits slowly. His team tried feverishly to repair during a ten minutes period in Q1, but to no avail the German’s qualifying over before it even began.

In the end Hamilton’s pole for the final grand at Sepang could provide the killer blow to Vettel’s championship hopes, should the Mercedes driver turn it into victory on race day while his title rival toils from the wrong side of the grid.

Hamilton said after securing pole for the final grand prix in Malaysia, “This is the best crowd I have ever seen here. We had no idea what was going to happen today.”

And added, “It’s a real surprise to be up here with these guys today but I’m really grateful. I’m sorry for what happened to Sebastian because obviously he was very quick through practice but somehow we turned it round. I’m very grateful. The car felt good.”

Raikkonen, who came desperately close to causing an upset, will start from second place and said, “When you get that close it’s a disappointment. But I know I made the most out of it. You always find some things to improve but the car has behaving nicely all weekend.

“We’ll try to get further than 100 metres tomorrow and see what we can do. I think we have a very good race car so let’s see. I don’t want to be hit,” added the taciturn Finn in reference to the start-line lap collision that eliminated him at the Singapore Grand Prix.

Birthday boy Max Verstappen was third fastest, as Red Bull showed handy pace but once again did not have the horses on hand to dial up in the final phase of qualifying. The Dutchman fractionally faster than teammate Daniel Ricciardo who will start beside him from fourth on the grid.

Verstappen summed up, “It is good for us in qualifying to be in this position. It is a lot of fun. It’s also amazing how passionate the crowd are. On my birthday it is perfect to be here and in this position.”

Then quipped with reference to Raikkonen’s Singapore comment, “I don’t want to be sandwiched!”

Ricciardo reflected, “Honestly Ferrari are the only one who have shown consistent pace all weekend on long runs. “I think we’ve been not completely happy with ours, and I think Mercedes as well haven’t found a good balance. We would be very happy in wet conditions. I’m always ready.”

Biggest disappointment of the session was Valterri Bottas who simply failed to find the sweet spot with his Mercedes, the Finn ending the session three quarters of a second shy of the pole time set by his teammate.

Bottas reflected, “We made a step forward compared to yesterday. We did end up with completely different cars to Lewis and at the end it seemed to be working for him and not so well for me. It has been tricky in many ways this year, The aero package was different and we need to review why it was better.”

Sixth fastest was Esteban Ocon who dug deep in Q3 to get the better of his teammate Sergio Perez who was only good for ninth, the Mexican two tenths shy of his Force India teammate.

Stoffel Vandoorne got the better of his McLaren teammate Fernando Alonso, the Belgian seventh fastest, 1.5 seconds down on the benchmark time, but three tenths up on the Spaniard who was tenth.

Nico Hulkenberg was eighth fastest in the Renault, notably a half second down on Verstappen in a similarly powered car.

Although Formula 1 debutante Pierre Gasly failed to out-qualify Toro Rosso teammate Carlos Sainz, the Frenchman gave a good account of himself during his first ever qualifying session. He was 0.151 of s second shy of the more experienced Spaniard who was 14th on the timing sheets.

Final word to Mercedes chairman Niki Lauda, “For us it’s a fantastic result. For Lewis it is easier but nevertheless we have to finish the race first and let’s wait and see. This was a Lewis lap – for Valtteri it is difficult to identify what went wrong. I think it is more a driver lap than the car.”

The major story of Q1 surrounded Vettel. A problem late in final practice led to a change of ICE and MGU-H on the Ferrari, but the team managed to get the title contender out on track at the beginning of Q1.

With about three minutes remaining in the session, his mechanics were replacing the engine cover on his Ferrari and it seemed like he would get one run in which to set a time.

However, he was held in the garage as checks were done and eventually the window of time available to complete a warm-up lap and cross the line for a flyer before the chequered flag was waved ran out. Vettel was eliminated from the session having failed to set a time.

Also ruled out at this stage were 16th-placed Grosjean of Haas, with the Frenchman finishing ahead of team-mate Magnussen and the Saubers of Wehrlein and Ericsson.

At the top of the order, Hamilton was quickest, with Verstappen in second. Third place in the Q1 went to Bottas, with Räikkönen fourth in the sole Ferrari to set a time.

In Q2 it was Räikkönen who set the early pace, taking P1 with a time of 1:30.926, just five thousandths of a second ahead of Verstappen. However, as the Finn and the Dutchman elected to stay put for the final runs, it was Bottas who ended the segment in P1, the Mercedes driver setting a time of 1:30.803.

Through to Q3 behind third-placed Verstappen were Hamilton, Ricciardo, Force India duo Perez and Ocon, Renault’s Hulkenberg and the McLarens of Vandoorne and Alonso.

Eliminated at the end of the Q2 were Williams driver Massa in P11, with the Brazillian followed by Palmer in the second Renault, Williams’ Stroll and the Toro Rossos of Sainz and Gasly.

In Q3 Hamilton finally made his move, claiming provisional pole at the end of the first runs, with Räikkönen three tenths behind the Briton. Ricciardo was third ahead of team-mate Verstappen.

And the Mercedes man was not to be denied in the final runs, though it was a close-run thing. Ricciardo was first across the line but failed to improved having made small errors in the final two sectors. Verstappen then jumped ahead of his team-mate to claim P3.

It was then Hamilton’s turn to post a final time and surprisingly, the Mercedes driver made no improvement. That left the door open for Räikkönen, but though the Ferrari driver put in a superb effort to improve by almost two tenths, he ended up in P2, just 0.045s behind Hamilton. A slight mistake in the final corner denying the veteran Finn pole.

With the Red Bulls locking out row two, fifth place went to Bottas. He was followed by Ocon, Vandoorne, Hulkenberg, the second Force India of Perez and the second McLaren of Alonso. 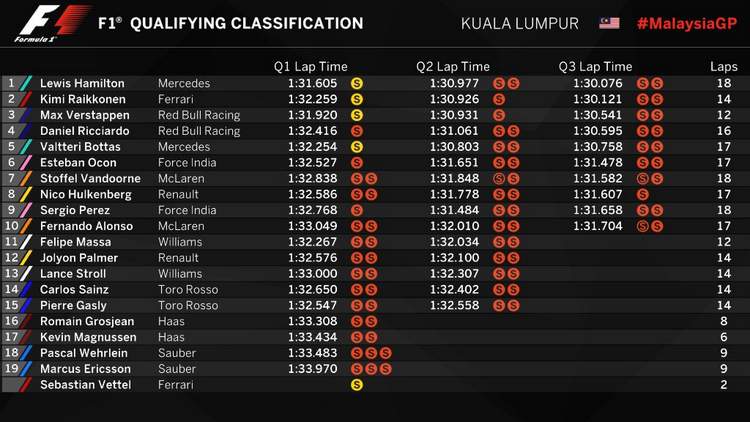