Sepang gets all clear after drain cover scare 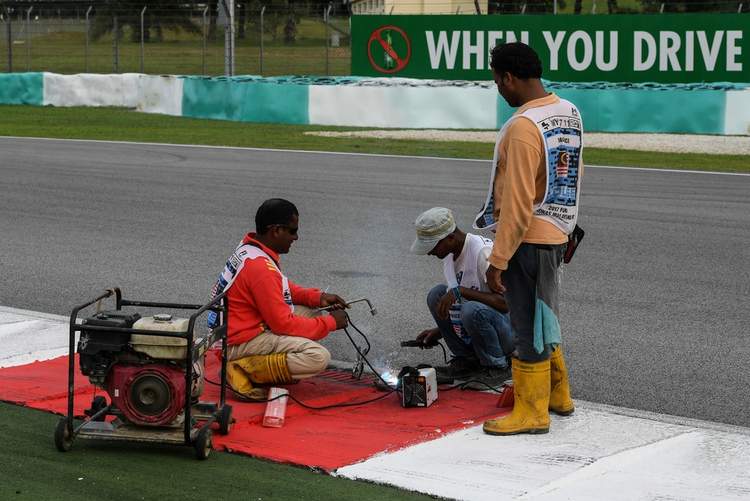 Formula 1 officials have given the Sepang circuit the all-clear after a loose drain caused a shocking tyre explosion during Malaysian Grand Prix practice on Friday.

Romain Grosjean’s Haas was flung into the barriers at high speed on Friday after a drain grille, which should have been welded down securely, popped up at a kerb on turn nine after Kimi Raikkonen’s Ferrari drove over it.

“If FIA do not say anything the race is good to go. We only listen to the FIA,” he added ahead of Saturday’s final practice and qualifying sessions.

In the freak incident, Grosjean’s car spun after he hit the raised metal drain cover at more than 200kph (124mph) causing huge damage to his Haas.

The impact instantly ripped his right rear tyre from its rim and sent the out-of-control car careering into the safety barriers with an impact estimated at 17G (17 times the force of gravity).

“All drain covers were inspected last night. It was reinforced, double checked … triple checked,” Razlan said, adding that there had been an FIA inspection earlier in the week which had declared the track safe. On Thursday, the FIA did a track inspection. We got a clean go to race.”

The FIA stewards at Sepang gave Haas special permission to repair Grosjean’s car due to the unusual nature of the incident.

Under F1 rules, teams must normally observe a strict overnight curfew, during which they are not permitted to work on their cars.

Officials said in a statement that it was because they “consider that the circumstances causing the crash of Car 8 were entirely and clearly beyond the control of the Driver and the Competitor.”

It came after an angry Haas team principal Guenther Steiner slammed the state of the track, “Thank God he did not get hurt or anything.”