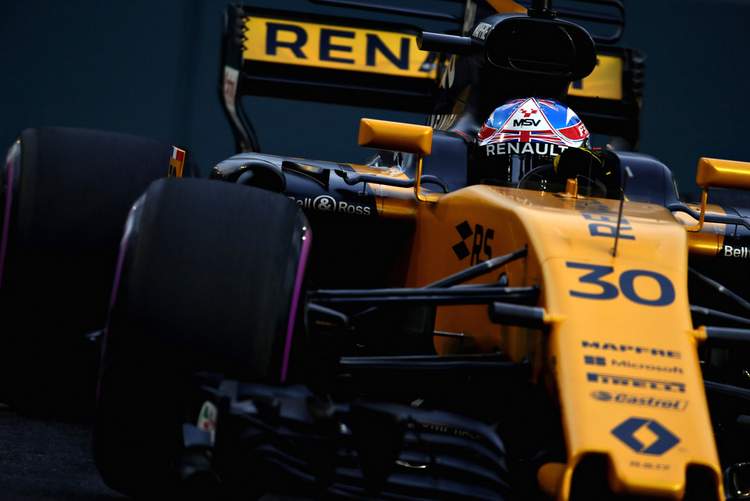 Renault team and drivers preview the Malaysian Grand Prix, Round 15 of the 2017 Formula 1 World Championship, at Sepang.

Renault Sport Racing Managing Director, Cyril Abiteboul: “Like Marina Bay, Sepang is a circuit which should suit the characteristics of the R.S.17 with its frequent flowing turns. The Malaysian Grand Prix has been a favourite on the Formula 1 calendar for 18 years and we hope the final race on this circuit will be special for everyone involved.”

“Looking back to Singapore, it was one of those mixed weekends which left us with bittersweet feelings. We were delighted for Jolyon to score his first points of the season. He drove extremely well in tricky conditions and remained cool amidst all the action to take an impressive sixth and bring in some big points for the team. However, we are obviously disappointed that we had to retire Nico’s car and will address the issues we faced.”

“We have extra incentive to continue to push hard to ensure both cars are in the points in Malaysia. A positive we can take from Singapore is that we have moved up a position in the Constructors’ Championship which means a step closer to our end of season goal of fifth place overall. Reliability remains our main focus, maximum effort and flawless execution is required by all in the remaining six races to achieve that target.”

“Finally, I would like to thank the Malaysian Grand Prix and everyone involved at the Sepang International Circuit. For Renault, this event has been successful and memorable. In total, Renault have six wins, six pole positions and four fastest laps across the 18 years that Malaysia has been on the Formula 1 calendar. A proud moment for us came on March 22nd 2003, when Fernando Alonso became the youngest F1 pole-sitter at the time – the rest is history, as they say!

Technical Director Nick Chester talks through the challenges of the Sepang circuit as well as the extremely unpredictable weather in Malaysia which could provide some surprises.

How are things looking ahead to Malaysia?
NC: We ought to go quite well in Malaysia with the mixture of low, medium and high speed corners. We should be the fourth quickest car again. The car has good pace and it looked strong in the wet in Singapore. The wet running we had in Singapore is useful information for us, given Malaysia is known to throw up a few surprises with its changeable climate. Overall the car is working reasonably well at this stage in the season.

Are there any updates for Sepang?
NC: A few things for Malaysia are on the way including some tighter rear bodywork which is the main development. This will combine with some set-up progress we’ve been making, in particular over the past few races.

Any memories from the 18 years Malaysia has been on the calendar?
NC: I like Malaysia, it’s a good track. I did the first one in 1999 which seems like a lifetime ago. There have been many challenging races there and the climate has often combined with the circuit to keep everyone on the pit wall and in the cockpit working very hard indeed. It will be missed from the calendar.

An unfortunate technical issue prevented Nico Hülkenberg from a career equalling best result in Singapore. But he is keen to dust himself down and prepare for the heat and humidity of Malaysia.

What are your thoughts on the Malaysian Grand Prix?
NH: It’s one of the hottest Grands Prix of the year and we are tested and pushed to the limits. We have to drink a lot of fluids because we lose so much during the race. The track is challenging with lots of high speed corners and fast combinations. I enjoy going to Malaysia. The weather is always different to Europe and takes a bit of getting used to. When you fly there you can see the rainforest which is cool. Rhythm is important around Sepang and it’s a nice feeling when it goes right.

How’s the circuit to drive?
NH: Turn one goes on forever, it’s quite tricky to get right. It’s important to find a good flow and keep a good rhythm. The final sector is slightly slower and a bit more technical with long, sweeping corners. This year’s cars will mean some of these bends will be very, very quick. It’s always hard to find the right balance and tyre degradation is usually quite high. You need to be early on the throttle for both the back straight and then the start and finish straight.

How do you reflect on Singapore?
NH: Sunday was tough to take and left me feeling disappointed. We lost a good result, and it was a case of not having a good enough reliability; that’s the way this sport goes sometimes. We lost our fourth position which is a pity especially after all the hard work from the whole team. It would have been a nice bunch of points but that’s racing and it happens! The car is looking fast and we have to build on the positives and take it forward now to Malaysia.

A classy and composed drive from Jolyon Palmer saw him secure a career best sixth place finish in Singapore. And he is ready to go on a Sepang circuit which gave him a maiden Formula 1 points finish last season.

What are your thoughts on Sepang?
JP: It’s always nice and warm there and I tend to do well in these humid races; Malaysia last year, Singapore this year so I’m looking forward to it. It’s a cool track with a good atmosphere to match. It’s a flowing circuit with some long straights, fast corners and hard braking zones. We have a bit of confidence going there. The car keeps getting better, I’m certainly improving too so we’ll aim to get another good result.

Is it a feeling of relief to get the first points of the season?
JP: Finally we had a smooth race which is ironic given what was going on with the safety cars and the tricky weather conditions. We made a good start, and the move on Bottas was fun; a lot happened in the two hours. It feels like a weight off the shoulders to get some points, I hope to push on now and get some more. I know I can do it.

What’s your record in Malaysia like?
JP: I raced in Sepang twice when I was in GP2 but for various reasons at the time I didn’t have any memorable finishes, although one year I came up to ninth from the back of the grid. Last year I got my first Formula 1 point; there are plenty of overtaking opportunities on the track so I’ll be looking to make the most of it and add some more points.

Have you seen the sights of Malaysia?
JP: I’ve seen a little bit of it but we don’t always have time to see the places we visit because we have busy schedules. Kuala Lumpur is a really cool city to explore and downtown you can visit the very modern areas with the big famous towers and then you have the more traditional areas and the markets. The city’s got a great vibe.

The 5.543km Sepang International Circuit has been on the Formula 1 calendar since 1999. It features a number of medium-speed to fast curves as well as a couple of tight hairpins which means finding the right setup balance is tricky. The back straight and the start-finish straight will be a good DRS overtaking opportunity come race day. The weather often plays a part in Malaysia with rain a constant occurrence due to its hot and humid climate.

Pit straight: The ICE will be flat out for around 10secs with speeds reaching over 330kph with DRS activated.