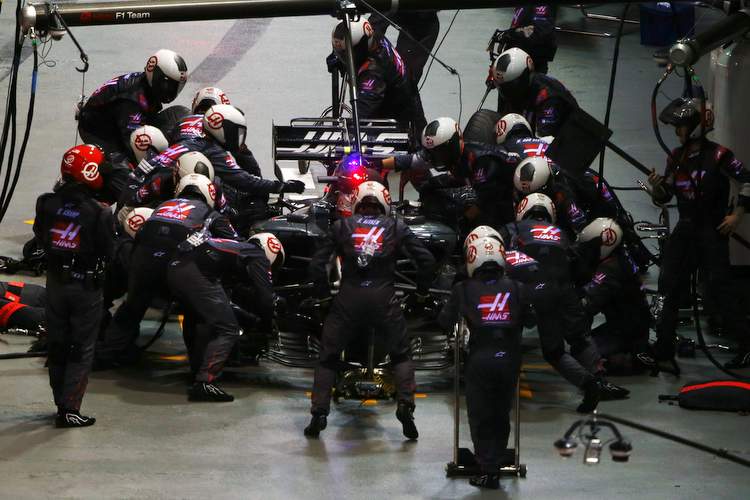 The 2017 Singapore Grand Prix seems destined to be remembered for its impact on the championship, with Sebastian Vettel crashing out and opening the door for an unlikely Lewis Hamilton victory.

Mercedes was the third-fastest car for the entire weekend up until the race, but a combination of that disastrous first-lap crash and the greasy conditions, in which Hamilton has typically excelled, conspired to gift the Briton a commanding championship lead.

Daniel Ricciardo was to be the only challenger, and though his Red Bull Racing car looked mighty during practice and qualifying, Hamilton found an extra gear during the race that made him impervious to any strategic ploys from the opposition.

Pirelli’s tyre information and much of Friday’s practice data was made useless by the rain that hammered the circuit as the cars sat on the grid.

It was enough to put the track somewhere between intermediate and wet tyres, and without the sun to dry it, the circuit remained slippery for much of the race. 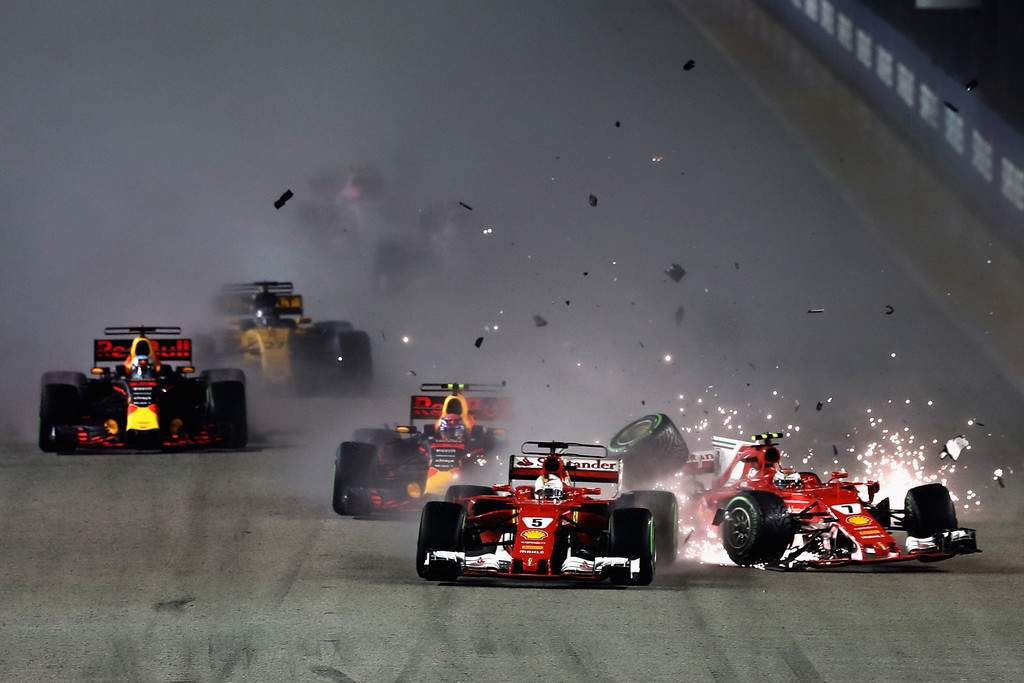 Lewis Hamilton was busy cruising around the outside of all three and Daniel Ricciardo as the carnage unfolded, and when Räikkönen, Verstappen and Vettel retired, he had only Ricciardo for competition.

Ricciardo and Red Bull Racing had three opportunities to influence the fight for the lead, but not all of them were seized upon. 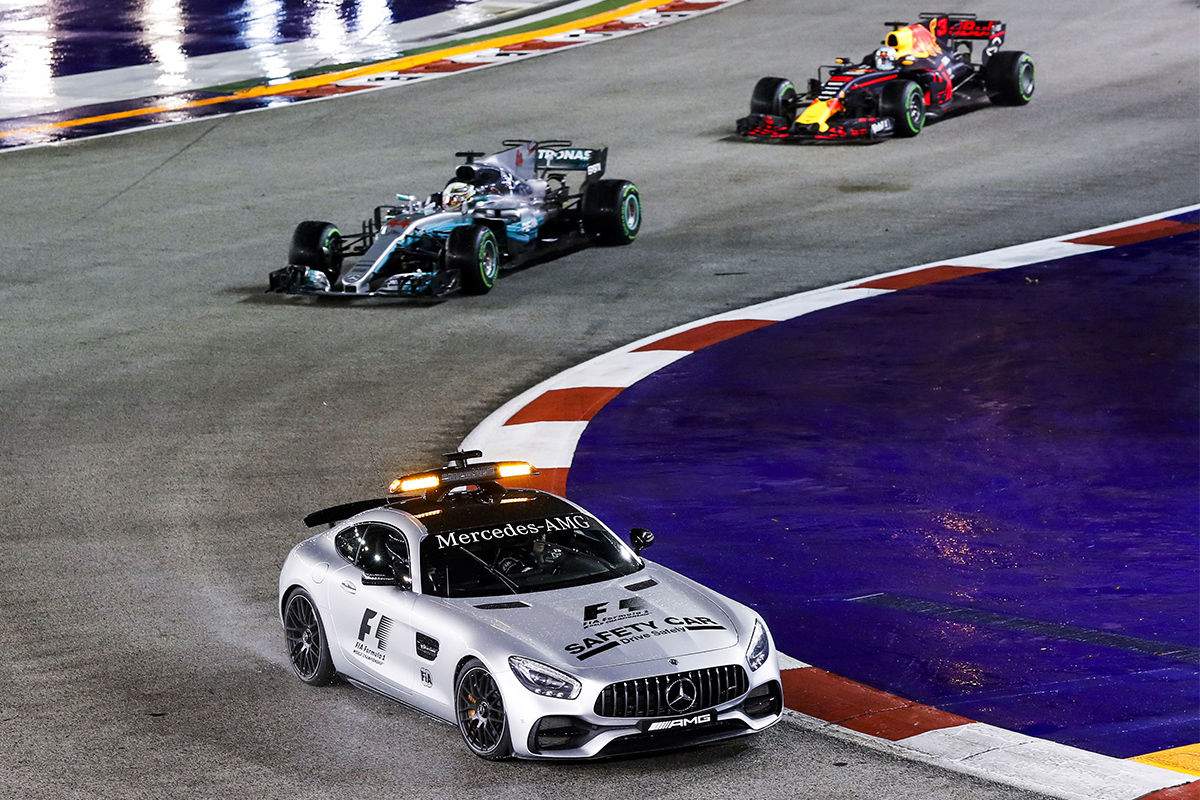 With no-one sure how long the track would take to dry, holding onto the intermediate tyres for as long as possible to avoid making unnecessary stops was the name of the game in the first stint — until the first safety car, that is.

When Daniil Kvyat embedded his car in the barriers on lap 11 and the safety car was deployed, Red Bull Racing took the opportunity to pit Ricciardo without losing places knowing that Hamilton was choosing to stay out and hold track position.

The fresher rubber should have advantaged Ricciardo, but Hamilton was able to lean more on his tyres to keep the Australian at bay.

In the tighter midfield Valtteri Bottas, Carlos Sainz and both Williams drivers stayed out, gaining them positions. 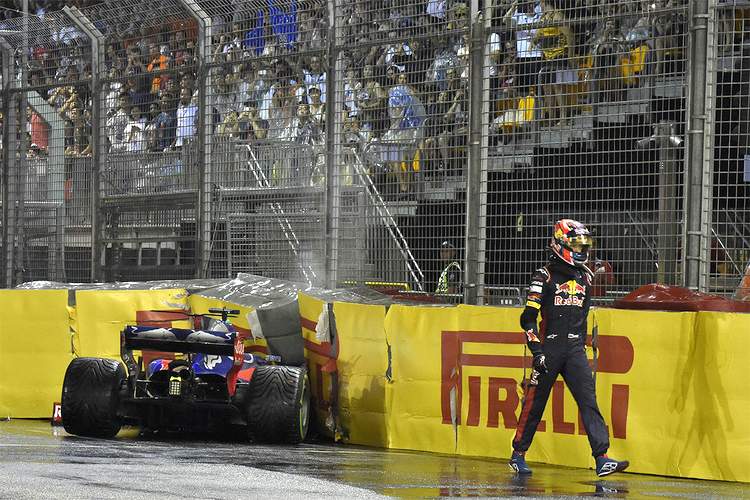 SECOND TRIGGER — THE SWITCH TO SLICKS

Ricciardo’s second opportunity to pressure Hamilton came after lap 20, when the circuit was agonisingly close to being dry enough for slick tyres.

Kevin Magnussen led the way on lap 25, and on the subsequent five laps the rest of the field followed suit.

It wasn’t until lap 29, however, that Ricciardo stopped, which proved too late to have any effect on Hamilton, who pitted one lap later. The ultrasoft tyre required a second lap to warm into its performance range, meaning Hamilton’s next-lap stop deprived Ricciardo of any undercut advantage.

With the safety car deployed Ricciardo held an approximately 20-second advantage over Bottas in third as he approached the pit entry, which should have been enough to make a tyre change and emerge ahead of the Finn. Ricciardo could then have pressured Hamilton with fresher tyres at the restart.

The opportunity was missed, however, and when Hamilton aced his restart, the grand prix was effectively lost. 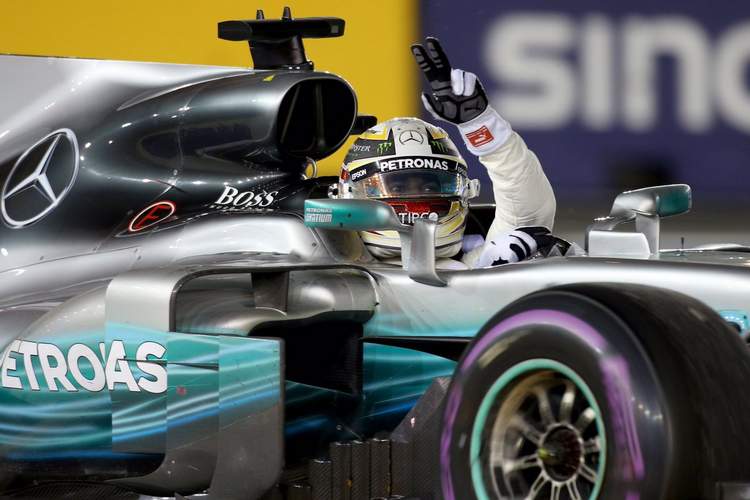 Having seen Hamilton’s lead obliterated by two safety cars and noting that Ricciardo had an opportunity to make a free pit stop during the third deployment, Mercedes instructed Lewis to lower his pace to ensure Bottas could keep closer to Ricciardo.

Hamilton was reluctant, knowing that any drop in concentration could prove terminal for his race, but a combination of his slowing and Bottas finding some rhythm ensured Ricciardo had no strategic opportunities through to the end of the race.

Carlos Sainz was one of the standout performers of the race, scoring a career-best fourth place finish.

The route to his 12-point haul was deceptively simple: he was one of five drivers, including race winner Lewis Hamilton, to made just one stop.

Sainz and Toro Rosso resisted the temptation to switch to new intermediate tyres during the Kvyat-triggered safety car, which earnt him four places, and he made a clean stop on lap 27 for slick tyres

Here, however, he and Toro Rosso erred, fitting Sainz’s car with supersoft rather than ultrasoft tyres, which left the Spaniard with a pace disadvantage when defending against Perez throughout the second half of the race.

Sainz didn’t crack under pressure, however, making this one of the highlight drives of the night. 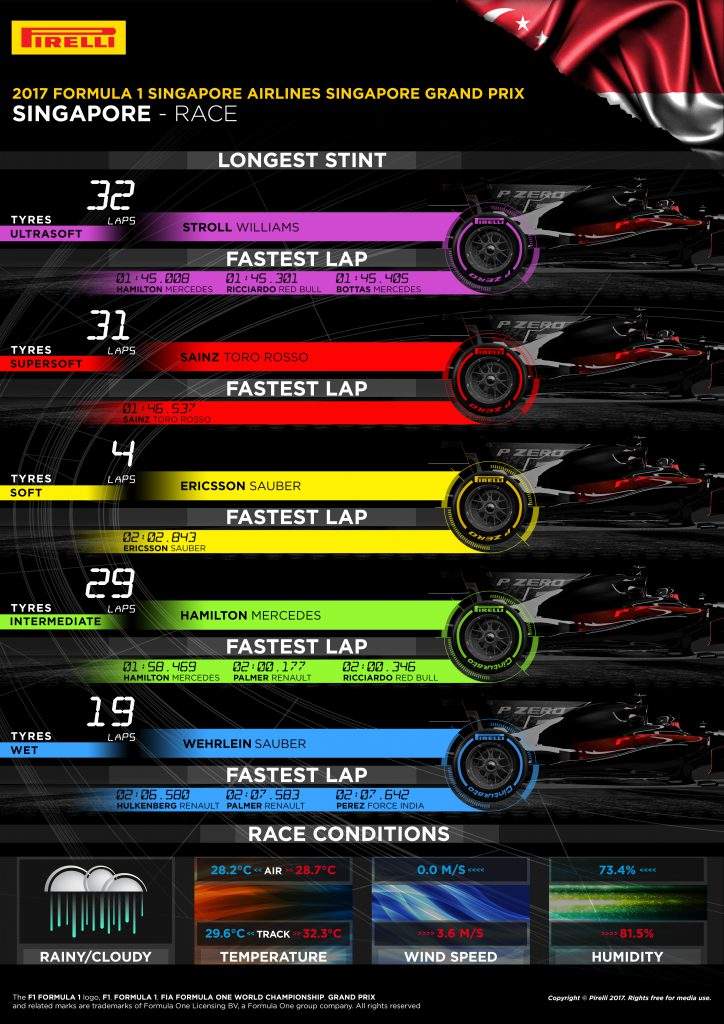 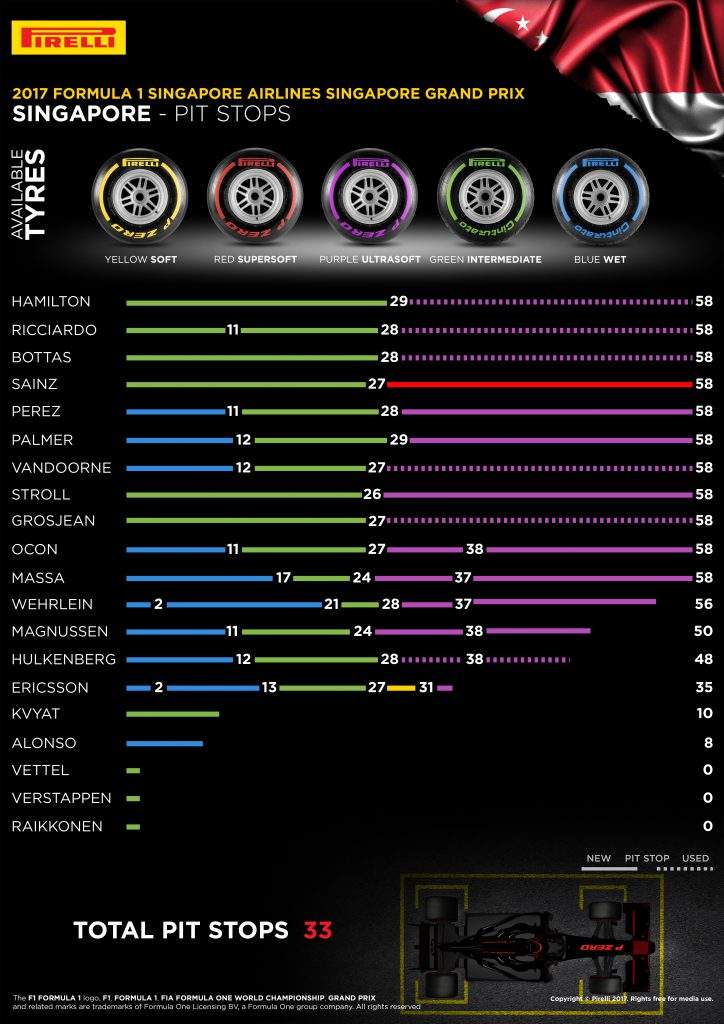 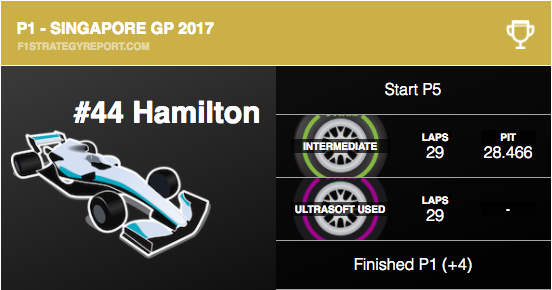 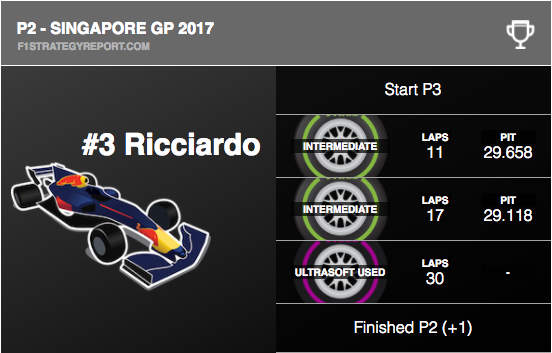 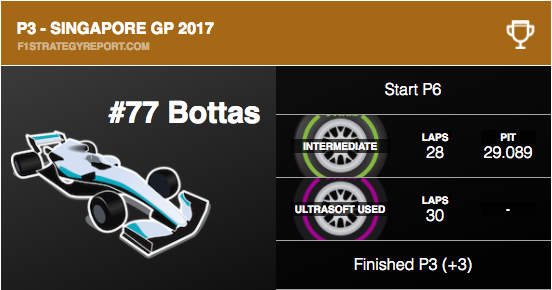 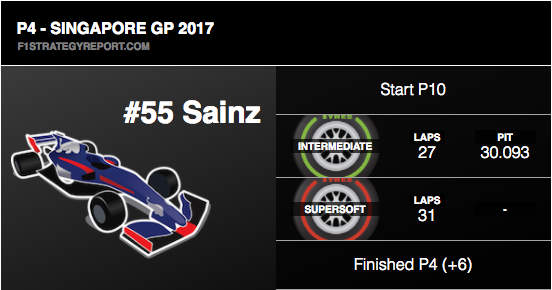 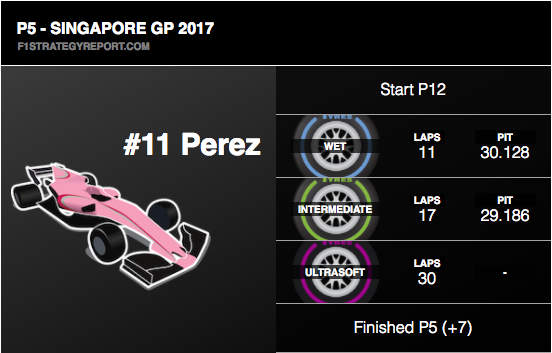 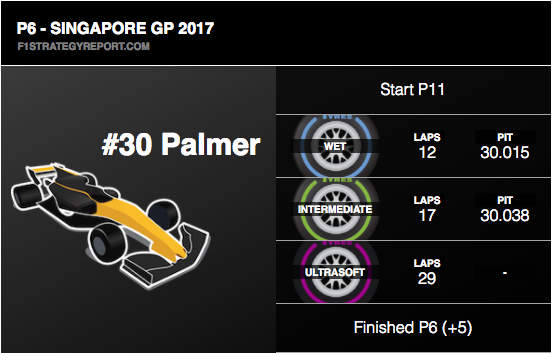 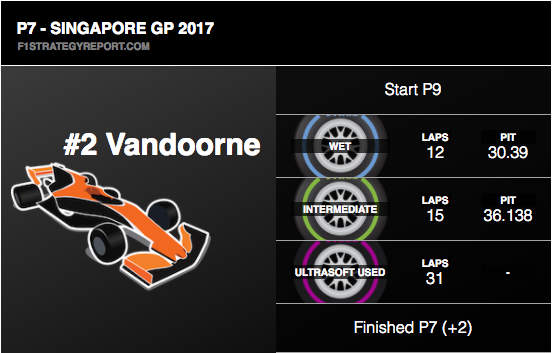 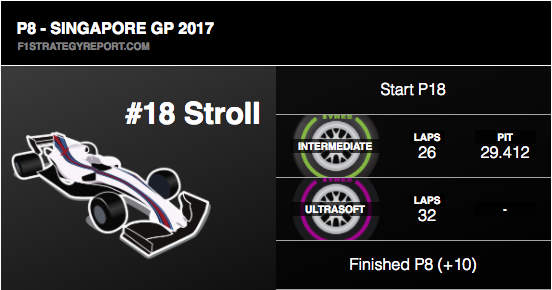 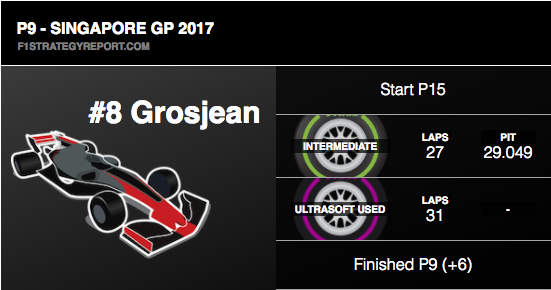 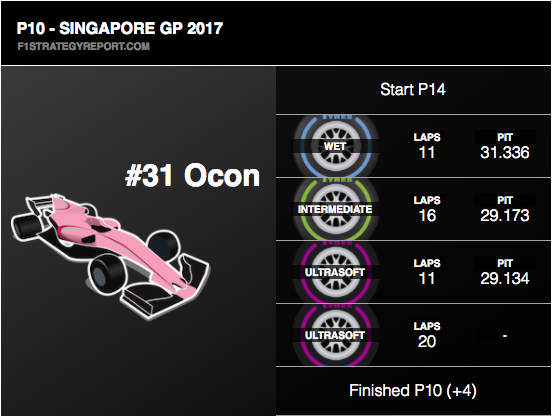 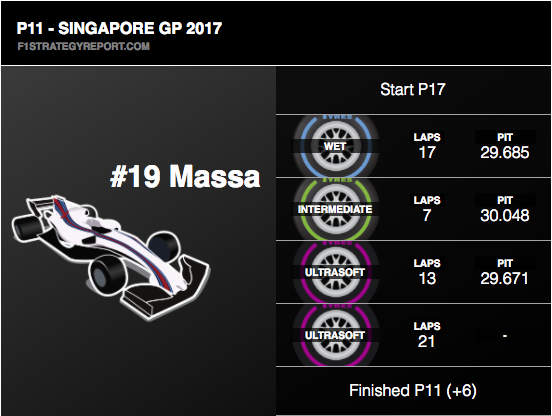 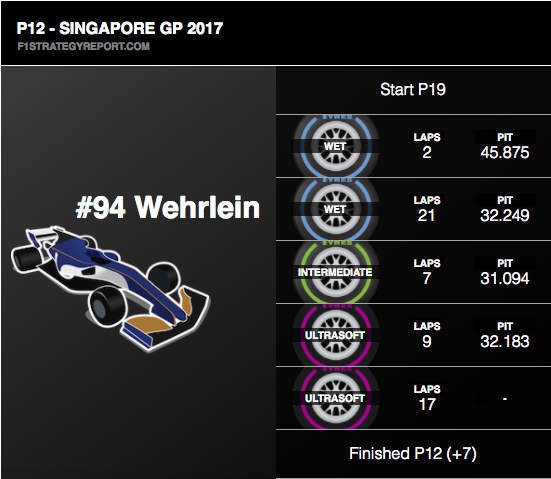 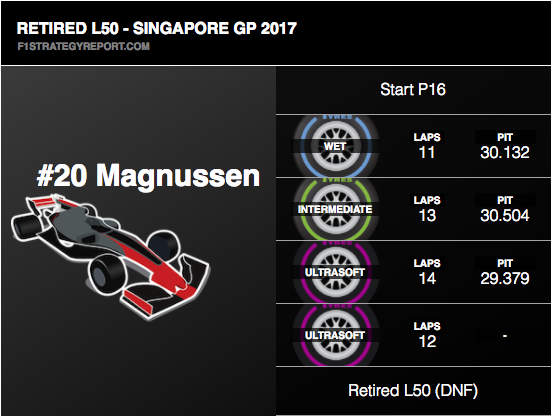 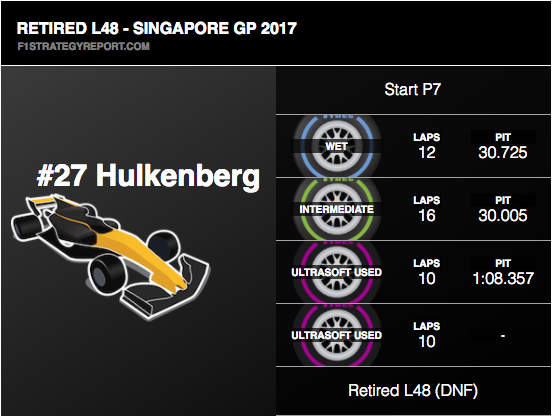 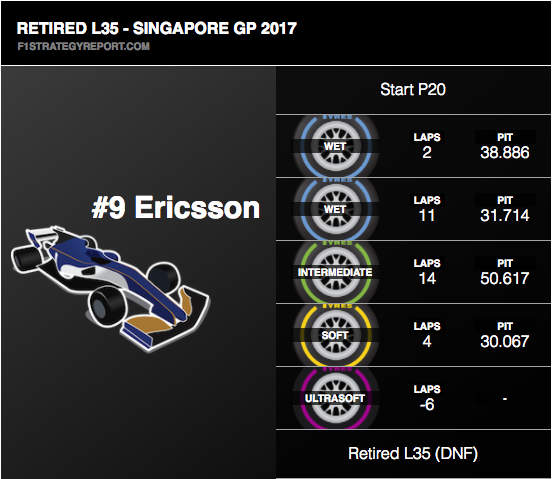 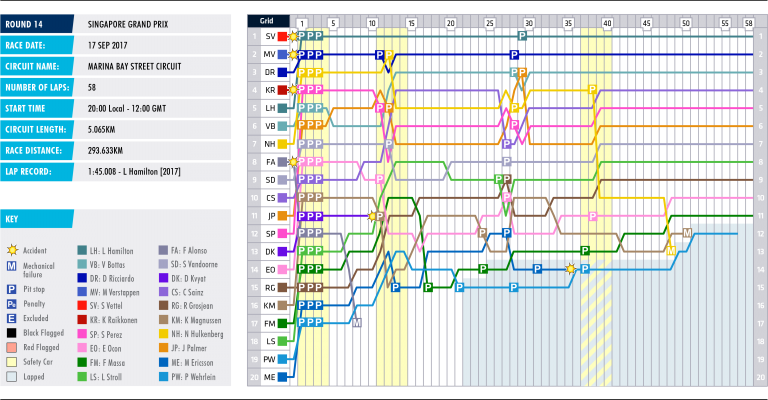