Villeneuve: Vettel has only himself to blame 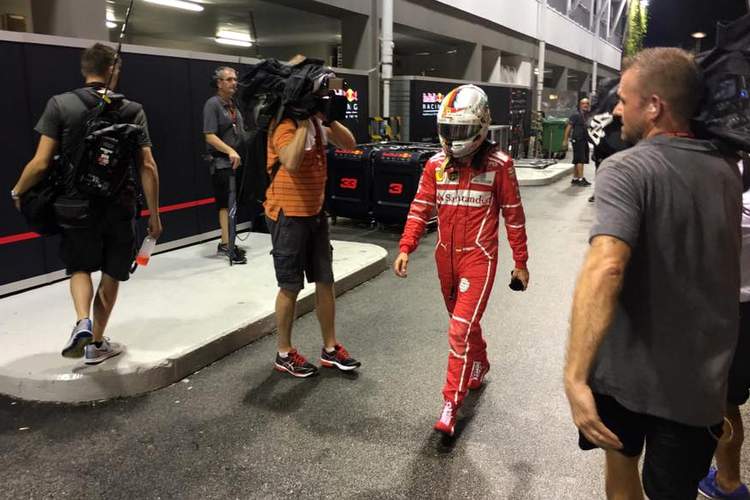 Jacques Villeneuve has pointed a finger of blame at Sebastian Vettel by accusing the Ferrari driver of triggering the pile-up, at the start of the Singapore Grand Prix, that eliminated the German, his teammate Kimi Raikkonen, Red Bull’s Max Verstappen and eventually Fernando Alonso had to park his McLaren due to damage incurred as a result of the first turn chaos.

The headline grabbing incident resulted in DNF for the four drivers, with Vettel paying the highest price as he was out of the race which he was expected to win seconds after it started. Instead he had to watch Mercedes driver Lewis Hamilton power to victory and increase his championship lead to 28 points, when the gap before the race was a mere three points.

Villeneuve said of the incident, “Vettel has only himself to blame. If you take a start and move across the line, the chances are something might happen because you don’t know what is happening behind.”

“They all do that at every start, you see that in Formula 4, Formula 3, they move across the line. Well if you do that, you pay the price. When you fight for a championship, you cannot take a risk like that.”

Despite the fact that Villeneuve does not condone defensive tactics of this nature, he does not think that Vettel should have faced further sanctions for his rle in the collision.

“I think he has penalised himself already enough. That was a track where the Ferrari should have taken a lot of points, so yes, it’s very heavy.”

“But there are still six races, anything can happen. Lewis will do something. Just relax. It’s annoying, but that’s the way it is,” added Villeneuve.

Big Question: Do you agree with Jacques?