Vettel: Grid position is king but it’s a long race 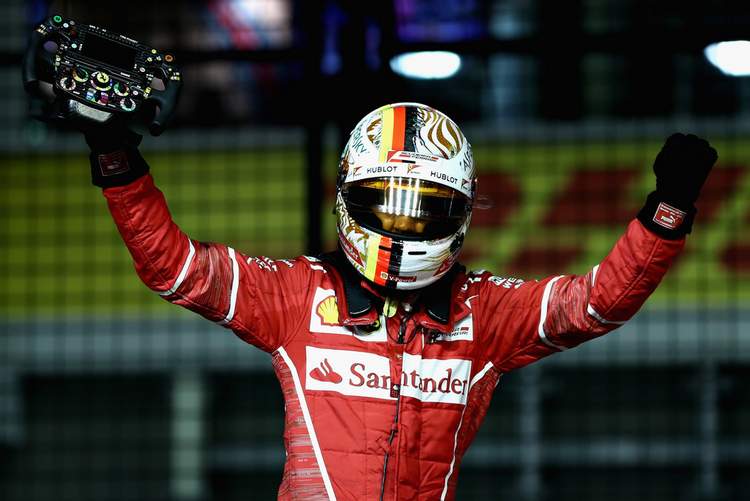 Sebastian Vettel was just as fortunate as he was brave on his way to a stunning pole position during qualifying for the Singapore Grand Prix at the tricky Marina Bay Street Circuit.

The Ferrari driver vaulted to the top of the timing screens in the close-run session’s final phase before then putting it all on the line to go even faster with a sensational lap in its dying stages.

Vettel touched the barriers on that lap, he later revealed, saying he felt lucky to get away with it.

“I brushed the wall quite severely out of turn 19,” the German told reporters after qualifying at the narrow and twisty Marina Bay street track. “It was actually a hit.

“It was fine until I approached the last corner, I had huge vibration. Thankfully there was only one corner left but I really pushed as hard as I could.”

The effort that went into that lap was apparent as Vettel let out an adrenaline-fuelled whoop on the team radio and he was initially breathless as he answered questions on the main straight immediately after getting out of his car.

“I was very relieved when I crossed the line,” he said later. “I looked at the screens behind and I waited for the call. I think right now I’m starting to cool off.”

The pole is Vettel’s fourth in Singapore,where he has also won on four occasions, and the 49th of his career, It is also his third pole so far this season.

As it turned out the 30-year-old German did not ultimately need to risk all, as his provisional fastest would have been good enough for the top spot.

However, with the track ramping up in grip and the Red Bull duo of Max Verstappen and Daniel Ricciardo — who had topped every session, including the opening two phases of qualifying –in hot pursuit, he could not bet on it.

That leaves Vettel, who lost the championship lead at the previous race in Italy, perfectly placed to seize it back by the time the chequered flag waves on Sunday night..

“Certainly grid position is king or crucial but it’s a long race,” said the four-times champion. “There are a lot of things we need to get right, so we should focus on ourselves.”