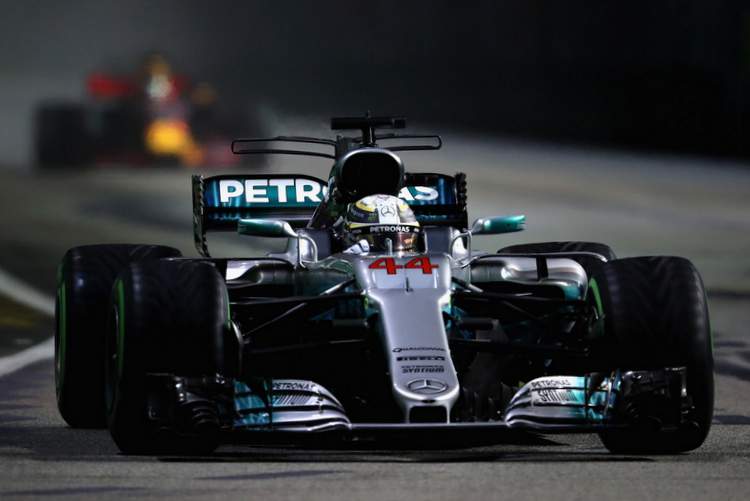 Lewis Hamilton cruised to an easy victory in the Singapore Grand Prix after a chaotic start to the race saw both Ferrari drivers Sebastian Vettel and Kimi Raikkonen as well as Max Verstappen eliminated after a spectacular start line collision.

From then on what promised to be an enthralling contest became a tense procession once the debris was cleared, in the aftermath of the Ferrari duo turning the Red Bull into the meat in their sandwich.

The race started with a drizzle over rain Marina Bay Circuit and as a result a damp track which prompted most of the field to bolt on Pirelli intermediate tyres.

Vettel managed a good start, but from fourth on the grid it was Raikkonen that found traction on the damp track and lunged between the wall and Verstappen as Vettel drifted to the inside.

Verstappen was squeezed with nowhere to go and was the meat in the Ferrari sandwich, inevitably there was contact. Raikkonen flew across the track, out of control, rammed Vettel before bouncing across the track and again collecting Verstappen in Turn 1, who in turn tagged Fernando Alonso’s McLaren. Full report here>>>

Vettel resumed in the lead but there was clear damage on the left side-pod of his Ferrari and a few corners later it snapped out of control and smacked the wall, the car rolling in reverse for a hundred metres before it came to a halt.

The trio were summoned to the FIA race stewards office for a conversation after the race.

Thus Hamilton inherited the lead where he stayed for the rest of the night despite the safety car periods which on each occasion reduced his nine or so seconds lead to nothing. But each time, Hamilton made a great start and simply roared into the distance.

Hamilton said afterwards, “I want to congratulate the team. It’s amazing points. Yesterday we struggled and had no idea what was going to happen today. It was very fortunate with the Ferraris at the beginning. I’m really thankful.”

“God blessed me today for sure. I capitalised on the incident. Who would’ve known that would happy. It’s really unfortunate for Ferrari but great for the team. Daniel put up a great fight. I hoped I would be fighting Sebastian. It’s better the way it is and I’m glad we got it home,” added Hamilton.

The man tailing him all race long was Daniel Ricciardo in the Red Bull, but he simply had no answer to the Mercedes driver and did well to finish second after fending off a hard charging Valtteri Bottas late in the race.

Ricciardo was in fighting mood after qualifying third, but he simply had no answer to Hamilton and in the end it was an uneventful drive to second place for the Aussie, the Bottas attack was well covered.

After scoring his seventh podium of the season, Ricciardo said, “I can’t win the bloody thing. We didn’t have the Friday pace to have the pace on Mercedes. A little bit disappointed to miss out on a win but I’m grateful for another podium. I watched the chaos in front of me. It was probably a good thing I had a poor start as I’d have been caught up in it. It looked like three going into one but I don’t know who’s fault it was. It was just too close.”

Third place was more than Bottas would have been realistically expecting as he struggled to find the sweet spot in his Mercedes all weekend. He to kept out of trouble, made a go of it in the end but will be satisfied with his night shift.

Bottas summed up, “It was very good damage limitation today. We got lucky but the car was working much better today. There are still plenty of races to come and plenty of opportunities [in the championship]. Sebastian is the next target.”

In the end, defying all predictions and on a track not suited to their car, the night belonged to Hamilton who bagged maximum points and saw his world championship lead extend from three points before the start to 28 when the chequered flag waved.

His seventh victory of the season may well be the turning point of this season and with six races remaining in the championship, a fourth world title is now his to lose. The hunter will now be the hunted.

Carlos Sainz was delighted to finish fourth in the Toro Rosso, his best result in Formula 1 thus far, while his teammate Daniil Kvyat crashed out in Turn 7 on lap 11.

Om the day he was confirmed by Force India as their driver for 2018 Sergio Perez delivered a solid performance to claim fifth place, with his teammate securing a double points finish for the Pinks in tenth.

On the weekend he came to know he will not be with Renault next year, Jolyon Palmer scored his first points of the season by bagging sixth place. His second points finish in 35 starts with the French team.

Stoffel Vandoorne claimed seventh place for McLaren, ahead of Williams driver Lance Stroll who turned 18th on the grid into eighth place at the end of the race. Romain Grosjean finished ninth in the Haas.

Mercedes chairman Niki Lauda summed up the situation, “The first corner was incredible and the end was fantastic. Where we came from and where we ended, the signs are the right direction. Lewis did an incredible race.”

“It was amazing how the Mercedes car performed in difficult conditions. Lewis drove fantastically. Now 28 points ahead, not bad. It is never won but this step forwards, with both Ferraris out, was not a bad result,” added Lauda.

Rain began to fall across the circuit in the hour before the race and though it stopped as the drivers steered their cars towards the grid, it began again 15 minutes before the formation lap, during which a number of drivers reported that visibility was poor.

A regulations start was undertaken, however, and almost as soon as the lights went out there was an incident. Polesitter Vettel and front-row rival Verstappen got away gingerly, allowing a fast-starting Räikkonen to pull alongside from fourth on the grid. Vettel moved across but Verstappen seemed to overcompensate and he collided with Räikkonen.

In a shower of carbon debris both spun off track, with Alonso also being collected along the way. Amazingly, the Spaniard was able to continue. His race only last until lap eight, however, when the damage sustained eventually became too debilitating.

Up ahead Vettel was also in trouble. The German spun later in the lap and smashed into the wall, losing the front of his car. He limped onwards but there was too much damage and he too retired from the race.

The safety car was immediately deployed and behind it Hamilton now led from Ricciardo, Hulkenberg, and Perez.

Racing resumed at the end of lap four, with Hamilton holding his lead ahead of Ricciardo. The Briton quickly opened up a five-second gap to the Australian.

On lap 11 the safety car was deployed once again, Kvyat having slid his Toro Rosso into the barriers after locking up.

Ricciardo was one of the first to react, pitting for a new set of intermediate tyres. Hamilton, though, stayed out on track, as a slew of drivers, including the Renault’s of Hulkenberg and team-mate Palmer, also headed for the pit lane for new tyres.

Bottas and Sainz opted to follow Hamilton’s lead, however, and they climbed to third and fourth respectively. The order now was, Hamilton, Ricciardo, Bottas, Sainz and Hulkenberg, with Perez sixth ahead of Palmer, Stroll, Vandoorne and Massa.

The safety car departed at the end of lap 14 and Hamilton once again held his advantage over Ricciardo. Now the track was beginning to dry, though in some sections the surface was still treacherous, as Hulkenberg found out on the next lap as he almost lost control trying to stay ahead of Perez.

Hamilton, though, was prospering on his ageing intermediates. Following the SC’s departure he began posting race fastest laps and by the start of lap 19 he had built a 3.0s gap to Ricciardo.

That gap continued to grow and by lap 26, Hamilton had a comfortable 6.8s seconds in hand over the Red Bull driver.

Further back, Massa and Magnussen had decided the crossover point to slicks had been made and they both pitted for ultrasoft tyres. On lap 28 Magnussen set the quickest first sector of all and the field began to pit for slicks, with Sainz taking supersoft and Vandoorne and Ocon stopping for ultrasofts.

Ricciardo, too reacted, pitting at the end of lap 28 for ultarsoft tyres in a 2.4s stop. Hamilton waited a lap longer but then he too made his way into pit lane for a set of purple-banded tyres, taking 2.5s to get them onboard.

There followed a spell in which the top three drivers traded fastest laps, though the end result of the tussle was that the gaps remained the same until lap 38 when Ericcson dumped his Sauber into the wall.

When the green flag was shown again at the start of lap 42, Hamilton once again held his lead from Ricciardo. The Australian though, quickly came under pressure from Bottas who had proifited from the Ericsson incident by seeing his 16s deficit to Ricciardo erased under the SC.

The Red Bull driver was alive to the threat, however, and by the end of the lap he had pulled out a 1.5s gap to the Finn and eventually would stretch that to five seconds.

Ahead, Hamilton was powering towards the flag, and on lap 43 he was a full two seconds quicker than Ricciardo, thus establishing a 4.0s lead within two laps of the SC departing. A mistake soon after saw that advantage halved, but that was as close as Ricciardo got. As the clock counted down, the gap stabilised at just under three seconds and as the two-hour mark arrived, at the end of lap 57, Hamilton swept past the chequered flag to claim his 60th career win and his third in Singapore.

Vandoorne was seventh for McLaren, while Lance Stroll delivered an excellent performance to take eighth, ten places ahead of his grid slot. Grosjean took two points for Haas and the last point on offer went to Ocon in the second Force India.