Red Bull: We have nothing to lose 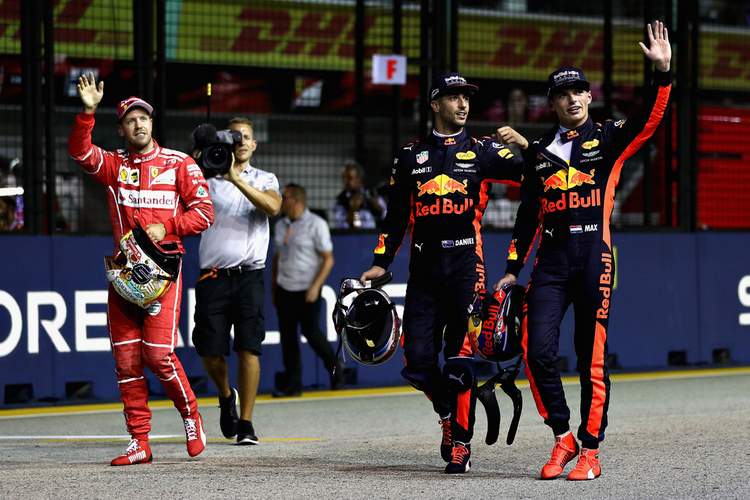 Max Verstappen and Daniel Ricciardo remained confident of victory in the Singapore Grand Prix despite the Red Bull duo missing out on pole position in qualifying, but Red Bull team principal Christian Horner suggests his team have little to lose and hints it will be a case of all or nothing on race day.

The former championship-winning team consider Singapore to be one of their best venues to secure a second victory of the season and have found a purple patch at the twisty Marina Bay street track reminiscent of their glory years in Formula 1.

Horner said after qualifying, “We’ve been quickest in every session and then the one that really counts, in those last stages…the drivers extracted everything from the car and we just don’t have that last little bit.

“We’re happy with a front row start and third as well. The race pace we had yesterday puts us in good stead for tomorrow.”

“They’re 5kph quicker than us on the straight but that’s what it is. If we can get a good start, we can hopefully give them a hard time. We have nothing to lose, Seb has a championship to think about.”

Ricciardo dominated the opening day of practice and Verstappen dislodged him at the top of the timesheets on Saturday, with the Dutchman going fastest in the opening two phases of qualifying.

But the Milton Keynes-based outfit, who could have locked out the front row for the first time since the United States Grand Prix in 2013, were denied by a sensational 1:39.491 second lap by Ferrari’s Sebastian Vettel.

“At the end of the day, to be second here, on this track, I think it is very promising,” said 19-year-old Verstappen, who could have been the youngest driver in the history of the sport to start on pole.

“We are not too far off so I can be quite happy with this qualifying,” said the Dutchman of his 1:39.814 effort that secured a second-place starting slot alongside Vettel on the front row.

Ricciardo, who was targeting a dominant weekend for Red Bull after his Friday form, was disappointed to qualify only third with a 1:39.840.

But the 28-year-old, who won for Red Bull this year in Baku and scored the team’s last pole position in Monaco last year, believes his car has an edge over Vettel’s Ferrari in race conditions.

“Today I’ll accept a little bit of defeat but there’s still a lot to play for tomorrow,” Ricciardo said.

“You might have to carry us out of the cars tomorrow but I’m sure I’ll have a very strong race and get some big points.”