Raikkonen: I couldn’t have done anything differently 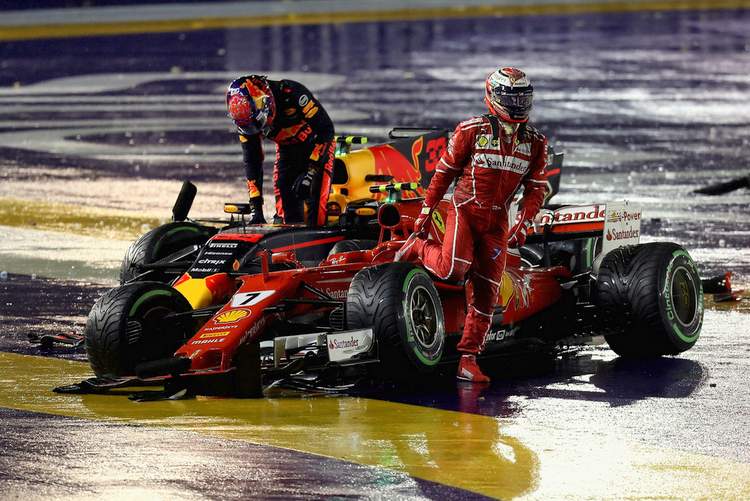 Kimi Raikkonen made a fantastic getaway when the red light turned dark to start the Singapore Grand Prix, but that’s as good as it got for the Ferrari driver as he was entangled in a three-way pile-up involving teammate Sebastian Vettel and Red Bull’s Max Verstappen as the trio hurtled towards Turn 1.

Raikkonen and Verstappen got out of their damaged cars which came to halt in the Turn 1 complex, while Vettel managed to drive a couple hundred metres more but the damage to his car caused him to spin out. The three podium contenders were out of the race, seconds after it began.

It was the first time in Ferrari’s history that both their cars were eliminated on the first lap of a grand prix.

Raikkonen told reporters, “I made a good start and I got hit and obviously there was nothing I could do after that. That was the end of the race so now we see what happens.”

“I don’t know about Max, you have to ask him. It was one of those things and you pay a big price for it. But I don’t think I could have done anything different from what I did to avoid it. It’s a shame but that’s it. I had a good first 100 metres but then the race ended there. We’re out and it’s far from ideal.”

When asked who he thought was to blame, Raikkonen responded, “Blame? Today the end result is the same whichever way you look at it. That’s really the only thing that matters now and whatever comes after that it still doesn’t make any difference.”

“The fact is we cannot change it that we’re no longer in the race – that’s really the bad part. The painful part for us is that both our cars were out of the race after the first few hundred metres – it’s far from what we would have hoped for.”

“It was one of those things and it was obviously bad for our race. Far from ideal, but it is what it is. You probably saw it better than me, but we got hit and taken out; that was the end of our race.”

“The are always different views from the people watching it, but I don’t know. All I know is that I couldn’t have done anything differently to avoid it,” insisted Raikkonen.