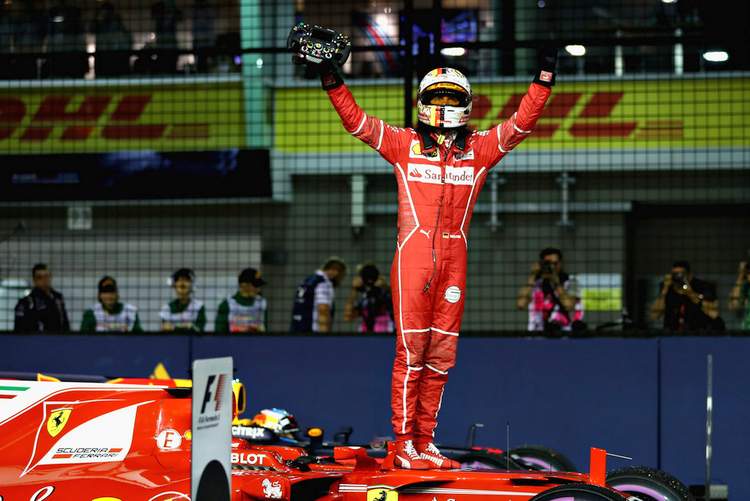 Sebastian Vettel was in top form as he powered to pole position for the Singapore Grand Prix as Ferrari found their mojo, while Mercedes and the German’s title rival Lewis Hamilton struggled under lights on the tricky Marina Bay Street Circuit.

Vettel did not show his hand until the final runs in Q3 whereupon he blitzed around the flood city track in a pole winning best lap of 1:39.491 to set himself up in the best way possible to attack Hamilton’s three points lead in the championship.

Vettel’s lap was a massive 3.1 seconds quicker than last year’s pole winning lap, and although the points are only dished out on race day, he will be looking with confidence at adding a fifth win at the venue to his CV.

Vettel said afterwards, “I don’t know [where that time came from]. I struggled also this morning. I shouted as loud as the crowd. It was unbelievable. I love this track. The car was tricky but was getting better, better and better. So pleased we got it done.”

“I need to calm down. The car was amazing. It;s an amazing track when you feel the car was coming together. I knew we had it in us but we had to get there.”

“I’m happy we got the car where it deserved to be. Tomorrow is a long race and the Red Bulls are very quick. It will be a very close race,” added Vettel.

The Ferrari driver was three tenths quicker than Red Bull’s Max Verstappen who was reveling in having a competitive car under him, but in the end simply did not have the firepower to claim pole. He will start from second on the grid.

Verstappen reflected, “It is promising, but a shame we couldn’t put it on pole The final lap wasn’t great. During the race it will be difficult to pass him [Vettel] so we will have to see in the first lap.”

Daniel Ricciardo in the sister Red Bull, was third fastest by a tad over three hundredths of a second, recovering well from smacking the wall in FP3 earlier in the day.

Ricciardo said, “I’m a little envious today. I will accept a little bit of defeat but I’m still confident we will get victory. Seb turned it on today but I think we have better race pace.”

Kimi Raikkonen had no answer to his teammate and was only good for the fourth best time, half a second shy of the pole winning time.

As was the case in 2015, Mercedes were well and truly stumped in qualifying with Hamilton only managing the fifth best time – a whopping 0.635 of a second on his title rival Vettel – while Valtteri Bottas managed the sixth best time, he was six tenths down on his teammate and well over a second off the top time on the night.

Mercedes chief Toto Wolff summed up, “There seems to be a certain pattern during the season. We have been particularly competitive on high-speed corners. This is just another example. Lewis probably hasn’t extracted everything from the car that is probably possible here today. Valtteri has been lacking behind all weekend. Tomorrow is what counts.”

Nico Hulkenberg was seventh fastest in the Renault, interestingly 1.2 seconds down on Red Bull with similar power units.

In the wake of their divorce from Honda, McLaren enjoyed a strong qualifying sessions with Fernando Alonso and Stoffel Vandoorne eight and ninth respectively.

Carlos Sainz rounded out the top ten in his Toro Rosso.

Down the order it was a disappointing session for Force India who expected to be higher up the order, instead Sergio Perez was 12th and Esteban Ocon 14th.

It was worse for Williams as both their drivers failed to make it beyond Q1, with Felipe Massa 17th and Lance Stroll 18th.

While Ferrari and Red Bull celebrated and ruled the roost it was a night to forget for Mercedes powered cars, but for fans the stage is set for what should be an enthralling and interesting duel under the bright floodlights of Marina Bay.