Alonso: Our chassis is up there among the best 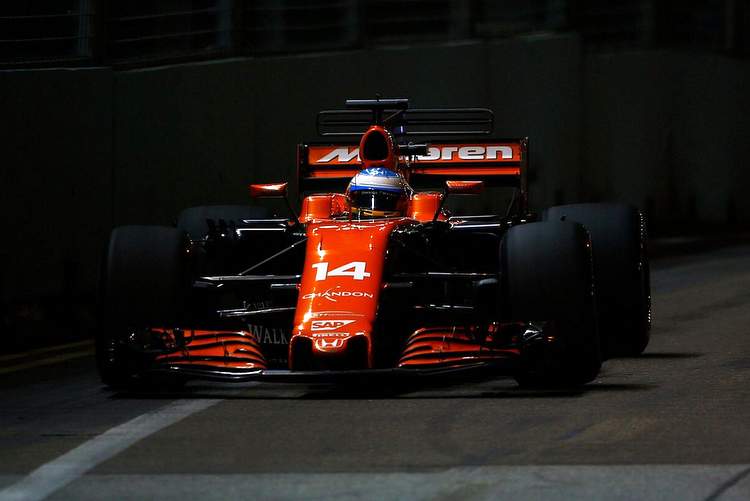 McLaren boast they have one of the best chassis on the Formula 1 grid but they are too often let down by their Honda engines, during qualifying for the Singapore Grand Prix they were up at the sharp end of proceedings with Fernando Alonso eight fastest in the session.

Speaking to reporters afterwards Alonso said, “We knew that this circuit could have a good performance for our car. The aim is to be in the points with both cars. We need to complete the job tomorrow.”

“In some circuits we have the impression we are up there with the best teams in terms of chassis. Next year will be a good test. The same engine as Red Bull will be a good test as to whether the chassis is good or not,” added the Spaniard.

Big news on Friday was the announcement that McLaren have ditched Honda for Renault power. On the day Renault’s Nico Hulkenberg was seventh fastest while the TAG Heuer (Renault) powered Red Bulls were second and third which suggests that with the French power unit bolted to the McLaren’s they may well be contenders again.

Alonso explained, “For the last three years we have been the only team with the Honda engine so it’s been hard to compare. But the engineers do simulations and we believe we have a good car.”

For McLaren. with the Renault deal now sealed, the final piece in the puzzle is in Alonso’s hands, with smart money on the double world champion staying on with the team. Both his world titles were won thanks to Renault power.

As for his future, Alonso said he will decide “in the next couple of weeks” and added, “I need to concentrate on this weekend. I need to go through the team, what are the prospects and expectations for next year in terms of engine performance.”

“After that, I will make decisions but I am extremely happy in the team. Everything is there to be competitive, hopefully, we have some positive news too.”

As for the race, the Spaniard said, “Stability is good. It’s good Stoffel is competitive but still behind [me]. Hopefully there will be some good news for next year to keep the stability. The start will dictate positions so it will be maximum attack at the start.”