Ricciardo: I joke and laugh but I’m also a killer! 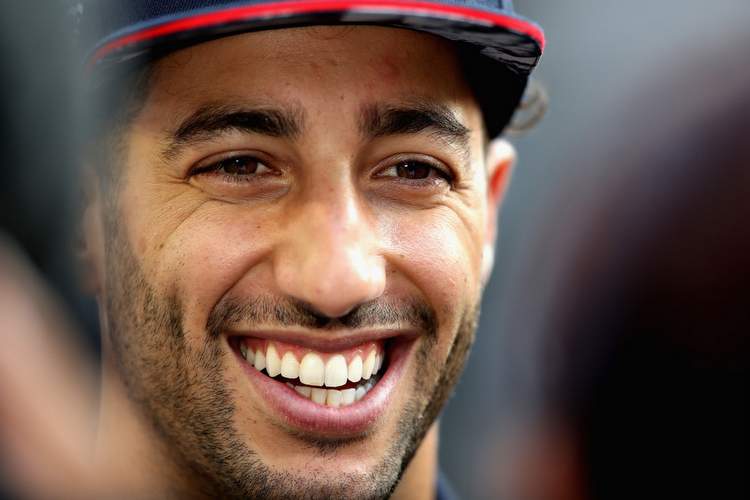 Red Bull driver Daniel Ricciardo is proving to be ‘king of overtakers’ among this generation of Formula 1 drivers, his exploits at the recent Italian Grand Prix were of the highest order and although he is a big smiling dude from down under he reveals that he has a killer extinct second to none, perhaps nurtured by his passion for MMA of which he is a big fan.

Our own Ben Stevens sat down with his fellow Aussie ahead of the Singapore Grand Prix weekend and shared a good old natter. Here’s the transcript.

Ben Stevens: First things first, awesome day out in Italy. You’ve developed this year a reputation of being the “king of overtakes”. Is that something you’re aware of?
Daniel Ricciardo: Yeah I think I started it already in 2014. It’s funny, a lot of the overtakes I did last week in Monza I did the exact same in 2014 – I did the same on Kimi in Turn 1 and the same on Perez in the second chicane. It was a bit of a repeat but it was fun. I just feel like if anyone ever questions my ability or my aggression – because a lot of the time people just see me laughing and joking around but I’m also a killer! [laughs]

BS: Is that something you have to switch on? Compared to when you’ve got the helmet on and when you’ve not – you were making a joke “I like ‘em vulnerable” in the race obviously you’ve still got that [sense of humour] when you’re driving – so is there a “switch” so to speak?
DR: Yeah there is, certainly. I feel that when I put the helmet on, the switch is kind of already “on”, but I’m still able to dabble with a bit of humour in the car – I’m just having a good time. I still manage to keep a balance, still being switch on and ruthless when I need to, but I’m comfortable kind of juggling that.

BS: So especially with the one with Kimi, and I’m pretty sure it was the exact same as the one with Valtteri last year…
DR: Yeah very similar.

BS: What are you telling yourself in your head? Are you relying on past experiences?
DR: A little bit but to be honest already before the Parabolica I’m telling myself ‘if I get DRS this lap, I’m going’. I kind of have blinkers on and sometimes you need to be instinctive and you can’t always plan a move far in advance, but that one, because I knew I was catching, my tyres were still fresh I wanted to make it happen as soon as I could, I basically told myself ‘if I get DRS, I’m doing it’. I kind of had blinkers on for that so I just committed to it and was like ‘alright if it doesn’t happen I’ll cut the chicane or crash’ whatever, I don’t know, but I was going no matter what.

BS: I did forget to add one… testicular fortitude
DR: [laughs] Yeah that’s definitely in there. You need that mentality where you can’t really care too much as well. You overthink it, then you’re not gonna do it, because I could’ve easily said ‘alright, I’ll wait ‘till I’m closer, I’m in fifth it’s already been a great race, let’s not risk it’ but no, if I can do better then I want to do better, I knew if I didn’t try then I would’ve gone home that night and been like ‘ I should’ve tried it’, this and that, I never want that feeling.

BS: You said it was 10% on other drivers, so does that mean there are other drivers you wouldn’t try that move on?
DR: [pauses] I think I would always try it, regardless, but I would probably be prepared for maybe some turning in on the apex, not seeing me, all that, but then again I strategize in a way where I knew if he went early enough, or he turned in, he’s got a chance to see me in the mirrors so at the most it’s 10% the other guy – I don’t want to give him too much credit!

BS: I’m curious what sticks with you more – a good pass that you’ve made, or when someone gets the best of you.
DR: Obviously I’m filthy if someone gets the best of me! So that probably sticks with me more, but in a good way because I can learn from that and not let it happen again. I think when I make a good pass, yeah I’m excited and all that about it – I’ll watch a few replays [grins] – but then move on, because I expect that from myself. If someone does me, I don’t expect that of myself so that rubs me the wrong way more, or gets my back up more.

BS: I liked Hungary 2014 – Lewis and Fernando
DR: Yeah, they were up there

BS: Because they were for the win as well
DR: Yeah. The one on Perez as well in Canada for the win – or like for second, but the “win” – there’s been a few for sure… There was one they never televised on Magnussen in 2014 in Austin, that was a good one. There’s been a few!

BS: That’s interesting then, how much of what you consider your standout moments do we not notice?
DR: Fortunately the TV picks up on most of them, but there’s been a couple which have gone under the radar. But yeah, for sure the one on Kimi everyone talked highly about that, and it wasn’t a normal, casual, easy move – that one got the credit it deserve.

BS: Do you notice the reaction on social media? Do you check? Like, say ‘I want to find out about this specific move or ‘what are they saying?’’
DR: I don’t necessarily read the comments. I’ll see if F1 post it and all that, I’ll see if it’s got say, 20,000 retweets. I’ll see the numbers and understand why that’s a popular video, but no I don’t go scrolling through and seeing what they said – A. I don’t have time to do it all and B. I’m happy if someone likes it but I’m not too bothered about someone’s opinion, if I’m happy with it that’s the main thing.

BS: I was reading your article on the Red Bull website where you were talking about you don’t have much instruction, much coaching – you compared it to tennis, and obviously [unlike in tennis] you can’t go out and practice passing. Is it still something you learn or have you always had that instinct. Have you built it?
DR: I think I built it over the years, and I’ve got it to a level where I’m very confident in racing situations now – yeah you develop it, obviously with any sport you’ve got some form of talent, and then it carries you through a certain phase but then you still need to grow and learn things for yourself along the way, I’ve just got to a level where I’m comfortable with all of that, but I’m not naïve in terms of- I don’t think I’m perfect and all of that, I still want to grow and I think the sport will keep evolving and the younger drivers will come in with different things probably. I strongly believe that, particularly since 2014, since I started to do some of these pretty cool overtakes, a lot of other drivers are trying now to do those. I really feel I’ve set the benchmark for the more modern drivers in that way.

BS: I 100% agree, it does seem the whole of F1 has gotten more aggressive, and that’s probably started with you.
DR: I think like the long lunges and that, before 2014, honestly I couldn’t tell you when I saw a driver make a massive long lunge, go from far back and pull it off. Sure, there’s some drivers who are not afraid to bang wheels, you know Seb and Alonso had their battles in Monza a few years ago and all that, so it’s not like drivers used to be afraid, but as far as committing from a long way back, I couldn’t recall anyone doing that.

BS: I’ll finish with the toughest question of all.
DR: I fear this is gonna be the easiest question.

BS: It might be tough, depends – test your knowledge, maybe.
DR: Alright.

BS: If you had to compare yourself to one MMA fighter, who would you pick?
DR: Ooooh!

BS: Tough?
DR: Yeah it is tough! There’s a few I’ve liked along the way for sure. Cub Swanson was one of the first ones I really liked, him and Carlos Condit are probably two of my original favourites. I like them. I think they approach the fight in a way which is… they’re never conservative, they’re the of kind of mentality that even if they lose, they’re not leaving like ‘ah, I didn’t try hard enough’. They’re always leaving with their head held high because they put it all on the line and they use everything in their arsenal to try and get the win – ‘till the final bell if it goes the distance. That kind of mentality, that kind of conviction, and I feel they’re really humble as well is nice. They’ve got a lot of tricks in their bag and, I don’t know, I feel like I’m similar to that. Yeah, I’ll take those two!

BS: Good choices I reckon.
DR: You a fan?

BS: Who’re you picking?
DR: I’ll be honest, I don’t know boxing as well as I know MMA so I couldn’t give you a real-

BS: (Whispers ‘GGG’)
DR: Yeah, if I was gonna guess, definitely say from what I’ve seen I would go GGG. Who’s the favourite, is there a favourite?

BS: It was their last fight that swayed it, because GGG had a lot of problems with Danny Jacobs, and Canelo rolled over Chavez, Jr. so that made the difference.
DR: Ok.

BS: I think GGG’s probably gonna get the knockout. I don’t think Canelo’s faced power like him before, so…
DR: I’m excited to see it, for sure. Alright, cool. I could talk fighting for a long time.

BS: Well we’ll do that another time then, I’ll get you talking just straight fighting.
DR: Awesome. They’re talking maybe the UFC’s gonna get to Perth in February.

BS: You’ll be there for that.
DR: Yeah I’m normally in Europe in February but I might have to come back.

BS: Testing can wait. Pshht.
DR: Yeah, I would like to avoid testing if could!