Williams: Felipe has been fantastic but we will wait and see 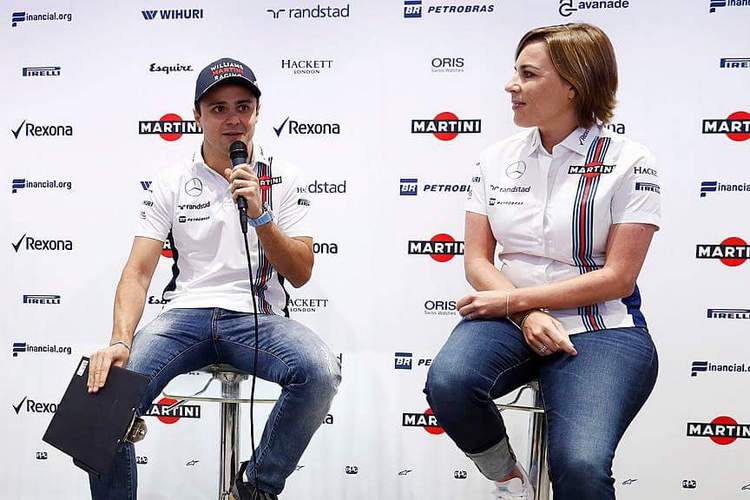 With a flurry of activity set to take place in the drivers’ market in coming days, focus has turned to Williams and the future of their veteran driver Felipe Massa who cut very short his retirement to return to the grid as a replacement for Mercedes bound Valtteri Bottas.

While Williams acknowledges that the Brazilian stepped up for the team when they needed a ‘mature’ driver to partner teenage rookie Lance Stroll, for now they are not committing to the Brazilian for next year.

Team boss Claire Williams told NBC, “Felipe has done a fantastic job, it’s been a bonus year for us. He very kindly came back and he’s really delivered for us.”

“Obviously the past couple of races have been tough for him with his medical issue [in Hungary] but we’re through that now and we’re looking forward to him delivering for the rest of the year and we really just have to wait and see.”

“I think I’ve made it really clear that the team at the moment are focusing on the constructors’ championship, we need to make sure that we consolidate our P5.

“I don’t think we’re going to close the gap to [Force India], unfortunately, but there’s a lot of teams behind us that would love to overtake us and take that P5 and we can’t afford that.

“So for us the focus really has to be on track performance at the moment rather than diluting that effort with thoughts about driver line-up. There’s still eight races to go, there’s plenty of time to be thinking about next year,” added Williams.

The driver market is highly charged at the moment with Fernando Alonso’s future uncertain as he waits on McLaren’s impending shift from Honda to Renault power which will reportedly trigger his signature to remain with the team.

Should this not transpire, smart money is on Alonso and Williams doing a deal despite denials by Williams that the two parties have not even met let alone discussed a deal for next year.

Nevertheless it is in Williams’ best interests to hold off deciding on Massa until the Silly Season waters have calmed down and then see who is left standing in what has become a game of musical chairs.

When the dust settles the Grove outfit will then be able to choose the best driver available to race for them in 2018, alongside Lance Stroll. If all else fails Massa will no doubt be the go to guy, as was the case last year, and the Brazilian will surely grab the opportunity to extend his career by yet anither year.

Big Question: Does Felipe deserve another year with Williams?