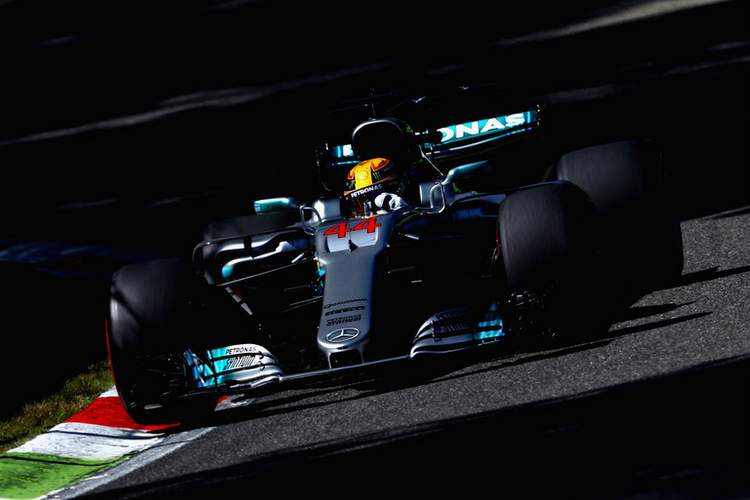 Mercedes dominated the Italian Grand Prix at Monza, with Lewis Hamilton scoring his sixth race of the season and with it taking the lead in championship drivers’ points by three over Sebastian Vettel who finished third on Ferrari home soil, albeit 30 seconds adrift of the winner.

After becoming Formula 1’s most prolific pole winner, Hamilton was untouchable at Monza controlling the race from the moment he powered off the start-line. Valtteri Bottas, after failing to to match his teammate in qualifying, turned fourth place on the grid to second place and claim the Silver Arrows’ third one-two of this season.

The weekend belonged to Hamilton whose feat on Saturday was widely praised by fans and media alike. He was quick to dedicate the pole to Michael Schumacher who he surpassed on the record books by claiming his 69th top spot start in Formula 1.

When the lights went out to start the race at Monza, Hamilton took advantage of the topsy-turvy grid and simply roared into the distance. Once ahead he was able to keep a five or six seconds lead over his pursuers, and when Bottas emerged in second place the pair were able to cruise to the end without stressing their cars.

It would be fair to say that it was one of Hamilton’s easiest victories, his fourth at ‘La Pista Magica’ and Mercedes’ fourth consecutive win at the home of Ferrari. He has not been the leader of the championship since he topped the standings after the Italian Grand Prix race last year.

He said afterwards to boos and cheers from fans below the podium, “I love it here in Italy and I love the passion of the fans. They’re fantastic. I’m happy, we did a great job, the team did an exceptional job. We owe it all to them.”

Then added provocatively, “Mercedes power is definitely better than Ferrari power. It worked well this weekend. The start was a bit difficult as the grip was quite low. It’s a great day and result for us.”

“The last two races have been incredibly strong. We’ve just gone from strength to strength. The car felt fantastic. It’s still close and a long way to go. Ferrari should be quick at the next circuit with the extra downforce they can put on their car so the fight continues,” concluded the new championship leader.

Although Bottas fluffed his lines on Saturday he bounced back in style to claim second place on race day. By lap four he was in second, perhaps realising that holding station was the best he could do and from a Mercedes perspective did everything that could have been asked of him for an unhindered one-two.

Bottas said, “Like Lewis, the start was tricky. I just needed to get my head down and get the places step by step. The car was so strong today, it was amazing how quick we were and it was a joy to drive.”

For Vettel it was a case of damage limitation, turning sixth on the grid to third was probably the nest he could do with what he had at his disposal. In front of the tifosi it has to be said that Ferrari were comprehensively beaten, and the German could be forgiven for settling for third rather than risking it all in pursuit of the silver cars which were clearly superior on a high-speed track that suits their car.

Vettel summed up, “It was entertaining. My start was not so good and it took a while for me to trust the car. After that we were a bit isolated. We didn’t have the pace of the leading two drivers. Even if this race has been difficult, I know we have a strong car and will have a strong end to the season.”

Our ‘Man of the Match’ was Red Bull’s Daniel Ricciardo who was in scintillating form as he powered through the field from 16th on the grid, thanks to engine penalties, to finish fourth.

His ‘dribble” on Sergio Perez’s Force India early in the race was jaw dropping stuff, but he went even better midway through the race when he ambushed Ferrari driver Kimi Raikkonen – the move of the day – to claim fourth where he stayed until the chequered flag waved. The Aussie setting the fastest lap of the race in the process.

Ricciardo said afterwards, “We were closing down the podium. We were catching Seb by a second a lap but then he was able to turn it up a bit and I was using all of my tyres. It was fun. Definitely had some really good overtakes. Hopefully we created some highlights for the year.”

“I’ll give Kimi credit for racing clean and fair. But I’d have done the move on anyone to be honest. I was aware the deeper I got towards the front the harder overtakes would be. I had blinkers on for the move and happy to pull it off,” added Ricciardo.

His Red Bull teammate Max Verstappen was in the wars all day long, contact with Felipe Massa’s Williams resulted in a front tyre puncture early on and compromised his race. Typically he fought back hard, upsetting Haas’ Kevin Magnussen in the process, to claim the final point for tenth place.

Verstappen reflected, “My race was basically finished after three laps so I was playing catch up. I still did quite a decent race so I was pretty happy with. Singapore? I was happy here even though I was fighting back and Daniel finished fourth. In Singapore hopefully we can fight for a real podium.”

Raikkonen was fifth on a day where he appeared out of sorts, complaining about an issue at rear of his car. He could not match the pace of his teammate, let alone the top two and had no answer for Ricciardo ahead.

After starting third Esteban Ocon gave a solid display as he quickly got by Williams’s teenage rookie Lance Stroll and held station despite a strong race long battle. packed with constant pressure, with the Williams duo as Felipe Massa joined the battle late on in the race.

The trio raced nose to tail for the final dozen laps, Ocon holding fast to finish sixth, with Stroll in under his wing as they crossed the line and Massa in his young teammate’s slipstream to claim eighth.

The Brazilian was fortunate to escape without damage despite contact with Sergio Perez and Verstappen as well as rubbing wheels with Stroll in the final laps.

Smiling from ear-to ear, Stroll said, “It was good. Could’ve been better. There were parts of the race that weren’t perfect. Lewis didn’t have such a great start which blocked me and meant I had to back off and give the position to Esteban

“It was a very special moment for me [starting on the front row]. Qualifying was probably the highlight of the weekend, being able to do what I did in those conditions,” added the 18 year old.

Perez made it two Force India’s in the points with ninth place after a relatively trouble free afternoon.

The Honda powered McLaren’s had another forgettable race with both drivers, Stoffel Vandoorne and Fernando Alonso, retiring with technical issues. Another massive blow, perhaps even the mortal one, for the beleaguered partnership.

Hamilton held his lead at the start, with  Stroll and  Ocon tucking in behind the pole-sitter. Their hold on the podium positions was short-lived, however, and after dropping back at the start, Bottas powered through and by lap three was up into second place behind his team-mate.

Further back Verstappen had made a superb start and by the end of lap one the Red Bull driver was up to eighth place from 13th on the grid. However, in attempting to get past Massa, there was contact and the Dutch driver sustained a front-right puncture and wing damage. He made his way to the pits for a new nosecone and fresh tyres and rejoined in last place.

Vettel too was pushing forward and after passing team-mate Räikkönen, the Ferrari driver managed to put himself into a podium spot by bypassing Ocon for P3 on lap eight.

Hamilton, though, was setting phenomenal pace and by lap 12 the Mercedes driver was 3.1s clear of team-mate Bottas and a full eight seconds ahead of championship leader Vettel.

By lap 28 Hamilton had more than doubled his advantage over his title rival, the gap now 18.0s. Behind the top three, however, it was Ricciardo who was on charge.

The Australian had qualified third but engine-related penalties had dropped him to 16th place on the grid. After the start he was quickly on the attack, however, and over the course of the first 10 laps he steadily picked off his rivals to sit in ninth place.

He executed a superb move on Perez at the second chicane to claim another spot and then as drivers ahead pitted for fresh tyres, he rose to fourth place behind Vettel.

The German was the first of the podium-placed drivers to pit, at the end of lap 31. He took on soft tyres and rejoined in fourth place. Hamilton made the same switch a lap later and he was followed by Bottas at the end of lap 33.

Ricciardo, though, continued to push on and on lap 35 he was 10.8s behind Bottas and 8.7s ahead of Vettel and 20 seconds clear of fifth-placed Räikkönen.

The Red Bull driver was the last of the frontrunners to pit and after a swift 2.2s stop for soft tyres he emerged 2.6s behind Räikkönen.

Armed with fresher tyres Ricciardo began to take chunks of time out of the Finn and on lap 41 he pounced, blasting past the Ferrari driver into the first chicane in a clinical overtaking move. He then set off after Vettel, lapping a second quicker than the German was who 11s ahead with 11 laps remaining.

Ricciardo’s pursuit of a podium place was the most diverting element of what, at the front, had become something of a procession. On lap 45, Hamilton was a comfortable 3.7s ahead of Bottas, while the Finn was a whopping 28.6s ahead of Vettel who was now struggling with unspecified mechanical difficulties following a Turn 1 off.

On lap 45 Ricciardo set the quickest time of the race to that point, a lap of 1:23.748. That was again a second quicker than Vettel on the same tour and the gap between the former Red Bull team-mate shrank to 8.7s.

With Mercedes secure in the top two positions, it was all about Ricciardo and Vettel in the closing stages and the Australian set a sequence of purple laps to closed to within five seconds of the German with four laps remaining.

With two laps remaining, though, Vettel responded and a personal best widened the gap to a comfortable 4.8s as he made sure that the threat from the Red Bull driver was nullified.

Ricciardo, though, had done enough to enliven a race utterly dominated by Mercedes and as Hamilton secured his 59th career win, 4.4s ahead of Bottas and some 36s ahead of Vettel, the Red Bull driver took a brave, battling and superbly executed fourth place.

Behind him, Räikkönen finished in P5. Ocon took sixth place ahead of Stroll, with neither youngster undoing the good work they had completed in qualifying and only the limitations of their machinery forcing them backwards.

Massa was eighth in the second Williams, while Perez was ninth for Force India. After his initial woes, Verstappen recovered to the final point on offer with tenth place.