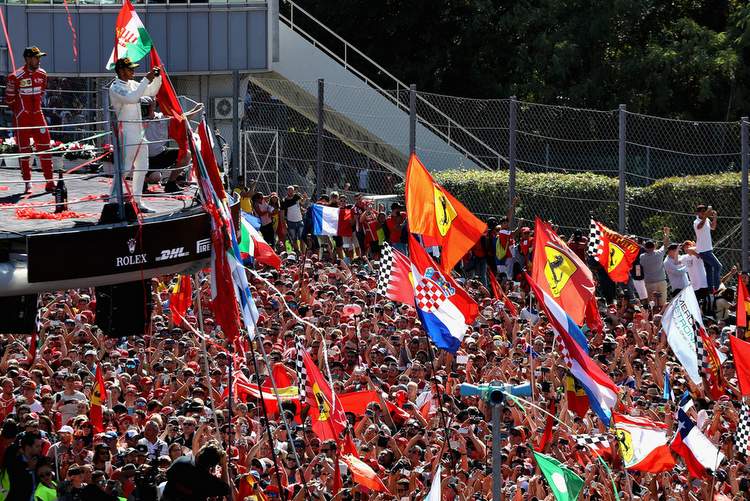 Lewis Hamilton has always shown admiration and respect for the tifosi, but after winning the 2017 Italian Grand Prix in dominant style he was greeted by resounding booing from the massive crowd as he stepped onto the podium to celebrate his third win at the iconic venue and Mercedes’ fourth consecutive win at Monza.

Speaking to podium MC Martin Brundle amid the deafening boos, Hamilton said,  “You know what, Iove it here in Italy and I love the passion of the fans, particularly the Ferrari fans, they’re fantastic.”

“This energy is like nowhere else we ever really get to see, apart from maybe Silverstone, so I respect it, I appreciate it. But I’m happy. We did a great job. The team did an exceptional job this weekend and me and Valtteri – Valtteri also did a great job – I think we owe it all to them.”

When the booing failed to subside he quipped cheekily, “Mercedes power is definitely better than Ferrari power.”

He added, “It’s all just to do with the team pulling together and trying to maximizing everything on the car and Valtteri and myself really trying to do the best job we can with the car.”

“But today the car was fantastic and really a dream to drive. But a big thank you to all the fans who came out today, grazie a tutti, and I look forward to coming back next year,” before taking out his smart phone and snapping photos of the red swathe of people crowded under the podium.

For the tifosi and their beloved Ferrari, Hamilton delivered a telling blow by winning comfortably – over 30 seconds to the nearest red car – and at the same time taking a three points lead in the drivers’ championship standing from Sebastian Vettel. The first time the Briton has led the championship this year.

Mercedes seem to build their cars to suit Monza, they have yet to be beaten at the venue since the dawn of the new turbo era. Hamilton having won the latest edition of the race, adding trophy to the ones he collected in Italy in 2014 and 2015. Nico Rosberg won the race last year.