Monza Qualifying: Hamilton reigns in the wet as Ferrari fumble 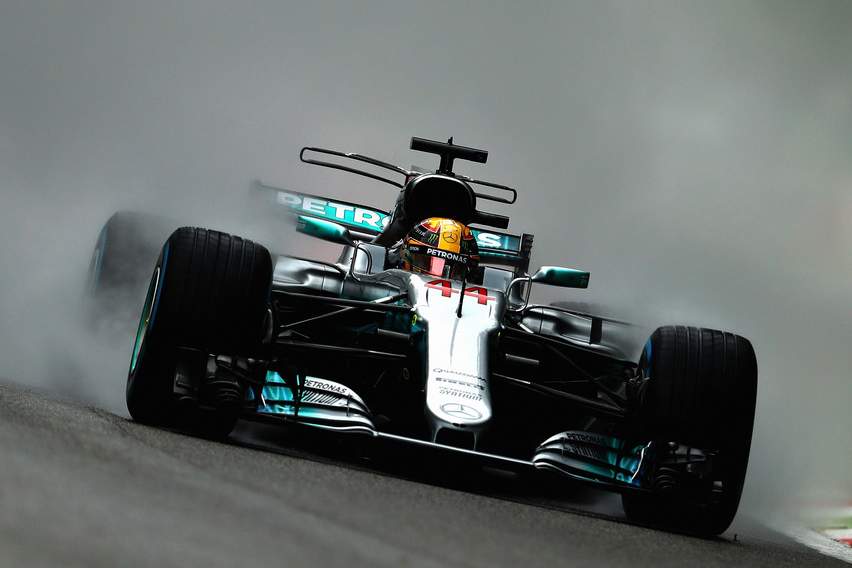 Mercedes driver Lewis Hamilton made history as he claimed his 69th pole position in Formula 1, surpassing legend Michael Schumacher, after dominating a marathon qualifying session at the Italian Grand Prix in treacherous conditions which saw Ferrari fumble in front of their home fans on a day packed with surprises.

The session was over three and a half hours long thanks to the delay shortly after the start at 2pm local time. Romain Grosjean lost control of his Haas on the main straight and slammed the barriers, prompting the three hour delay as the Race Director, Charlie Whiting, waited for conditions to improve. He unleashed them again at 5pm,

From that point on Hamilton was always at the sharp end and when it mattered but it gave no hint of the firepower he had in store . On his final run in Q3 with rain increasing, he delivered a lap worthy of beating Schumacher’s record. It was over one second faster than his closest rival. An enormous achievement in the most challenging qualifying conditions in memory.

Hamilton said afterwards, “We’re in Ferrari’s homeland but we have a lot of support for Mercedes. To do this here at such a historic circuit, I’m going to have some pasta tonight to celebrate. I came across the line and I didn’t know if I had it but it felt a good lap. 69 I can’t believe it.”

Notably Hamilton’s best time of 1:35.554 was also 2.3 seconds faster than his teammate Valtteri Bottas who was sixth, but more importantly he comprehensively trounced title rival Sebastian Vettel who was 2.5 seconds in eighth.

The German admitted that he could not explain went wrong for the Reds on home ground and in front of the team’s big boss Sergio Marchionne, teammate Kimi Raikkonen was seventh, who also was at a loss to explain the blatant shortcomings on the day.

Vettel told reporters, “I have no idea what the problem was. I was surprised by how quick the others went. At this stage we don’t know why. It was an important day but it is what it is and we will see how it goes tomorrow.”

“We have a good car so we don’t need to be afraid. The car is quick – we know that and you can overtake here – it should be a fun race. Years ago we were able to run in the wet. It is fine for us – we are sat in the dry but for the fans out there it is pretty ugly,” added the German.

It was a bittersweet afternoon for Red Bull whose drivers Max Verstappen and Daniel Ricciardo were second and third respectively, with the young Dutchman taking the fight to Hamilton and Ricciardo doing well to keep his teammate in sight. On the downside the pair have engine penalties which relegates them to the back side of the grid for the race.

Almost stealing Hamilton’s limelight was young Lance Stroll who impressed all and sundry with his finest hour in Formula 1 to date. The 18 year old Williams driver was at the sharp end of proceedings throughout the conditions and on his final lap popped the fourth fastest lap, which will see him start from P2 on the front row thanks to grid penalties taken by the Red Bull duo.

Stroll, who on Sunday will become the youngest ever front row starter in F1 history, summed up his afternoon, “It was a lot of fun. The car felt good and I just had fun. I’d never driven an F1 car in the wet so I just tossed it around. Hopefully we can have a good race from the front row. I had a great time. I know we’ve been struggling a lot the past few weekends and today it came together.”

Force India’s Esteban Ocon was another star on the day, ending the session fifth and showing why Mercedes rate him so highly. His teammate Sergio Perez failed to make it beyond Q2.

Stoffel Vandoorne rounded out the top ten in his McLaren.

Mercedes chairman Niki Lauda summed up a dramatic day at Monza, “Unbelievable. I have no words. Lewis’ lap was unbelievable. Valtteri didn’t get it going. But if you look at the grid now, it is Hamilton, Stroll, Ocon, Bottas. That is unbelievable. It is not hard when you are a driver like Lewis. He can put everything together and do a fantastic lap.”

After final practice was disrupted by the weather, Qualifying got underway in improved though still wet conditions. And with the rain intensifying as the pit exit opened, a queue of cars formed up, the intention being to put in a ‘banker’ lap before track conditions worsened.

Hamilton quickly rose to the top of the order with a time of 1:40.128, followed by Vettel, more than two seconds behind.

Grosjean was third of the seven cars to have posted a time when five minutes into Q1 the Frenchman hit trouble.  Grosjean’s Haas aquaplaned on the start/finish straight and slide into the barrier at Turn 1. The incident, along with the worsening conditions, immediately brought out the red flags.

As the rain continued to fall heavily, Race Control was forced into a long series of 15-minute delays, but eventually, almost two hours and a half hours after the scheduled start of Q1, conditions improved and at 1640 local time the session got underway again.

As the drivers stayed on track on full wets, Hamilton made a series of improvements in lap time to cement himself into P1, eventually sitting ayt the top of the order on a time of 1:36.009.

A number of drivers gambled on intermediate tyres, including Vettel, who jumped from fifth to third with a 1:37.198s as the rest of the field began to make the switch in the hope of improvement.

It was the right move for Toro Rosso’s Sainz who managed to escape the drop zone by setting a time of 1:39.788 – good enough for P15 – but it failed to help Haas’ Magnussen, who was in eliminated in P16 ahead of Renault’s  Palmer, the Saubers of Ericsson and Wehrlein, as well as Grosjean who did not take part in the re-started session following his crash.

Q2 began with  Verstappen first on track, the Dutchman reverting to full wet Pirelli tyres. That appeared to be the right choice early on as Hamilton, on inters, slotted into second, four tenths back.

The advantage of the blue-banded tyre didn’t last long however, and drivers quickly began to find a sweet sport with the green Pirelli. Hamilton took top spot but was soon usurped by Vettel who lapped in 1:36.223s. Hamilton then took top spot again with a time of 1:38.344.

In the drop zone with two minutes left on the clock were Ocon, Kvyat, Sainz, Perez and Alonso. Of that quintet only Ocon escaped, the Frenchman jumping to P10 with his final lap. Behind him team-mate Perez was eliminated in P11 ahead of Renault’s Hulkenberg, Alonso. Kvyat and Sainz.

Q3 saw steady improvements across the board, despite the rain arriving again. It was the Red Bulls who made the biggest initial impression with Verstappen and Ricciardo trading P1 times as Ferrari, in particular, seemed to struggle in the conditions.

Force India’s Ocon too was putting in a strong performance and as the final moments arrived the Frenchman set the quickest first sector to threaten an upset. His bid fizzled in the final two sectors, however, while Verstappen’s chances improved.

The Ductman set an impressive time of 1:36.702 to claim provisional pole and Red Bull looked to be in with a chance of a front-row lockout when Daniel slotted into P2 a tenth behind.

But Hamilton had a record in his sights though and his pace was phenomenal. The Briton blasted to his 69th pole in a time of 1:35.554 to finish 1.1 seconds ahead of Verstappen and to moved him ahead of Michael Schumacher’s all-time record of 68. The lap also means that Hamilton now has six Italian GP poles, moving him one clear of Juan Manuel Fangio and Jim Clark.

Red Bull’s performance was bitter sweet, however. Both its drivers are set to take grid penalties for tomorrow’s race and thus it will be Stroll who lines up on the front row beside Hamilton after the Canadian rookie put in an exceptional stand-out performance to claim P4 in qualifying with a time of 1:37.032, almost seven tenths clear of Ocon who will start at the front of row two alongside Bottas.