Horner: It’s a shame that we have to take the penalties 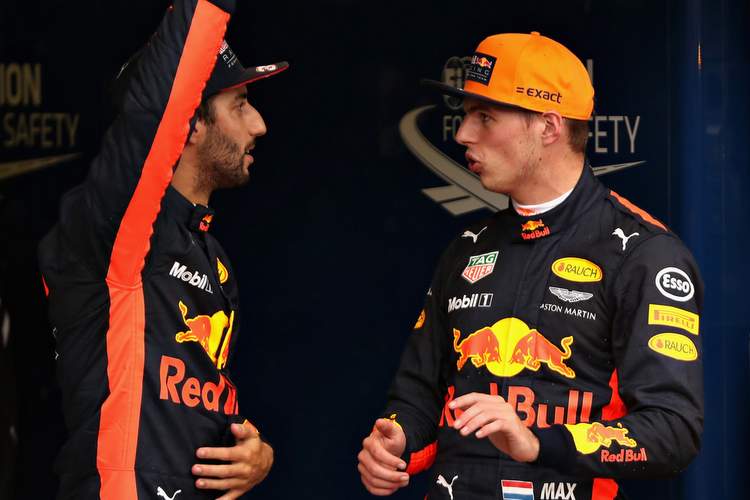 Red Bull drivers Max Verstappen and Daniel Ricciardo shone in the dreary overcast and rainy conditions that prevailed during the Italian Grand Prix, with the pair qualifying second and third respectively but the joy is marred by the fact that they will be starting the race at Monza at the wrong end of the grid due to engine related grid penalties.

Both Verstappen and Ricciardo were in fine form in trying and treacherous conditions, the young Dutchman taking the fight to Hamilton throughout the session. He was even on provisional pole until Lewis Hamilton delivered an impressive lap to steal it away from the teenager with his final run.

Nevertheless the Red Bulls were way faster than the Ferrari duo and best of the rest, but they always knew that for the race they would be nowhere near the front of the grid as the penalties incurred for engine changes. Ricciardo will start from 17th and Verstappen from 14th.

Afterwards Red Bull chief Christian Horner lamented, “It’s a shame that we have to take the penalties, but we’re enjoying the qualifying for now. Second and third is a fantastic performance from both of the drivers.”

“Even with the penalties from where we start on a mixed up grid, there are still opportunities at a track where you can overtake.”

“We got all the timings right today. The pit wall did a great job, and we picked the right tyres for the right conditions. Both of the drivers today have done a phenomenal job.”

“It is slightly academic for tomorrow as the penalties see both drivers starting down the grid but we will be hopeful of making good progress as the race unfolds.

“At the very least the fans deserve to see an exciting Italian Grand Prix as a reward for their support and waiting in the rain for the late show today,” mused Horner.

Helmut Marko added, “It’s frustrating not only for the penalties, but we have nearly no downforce on.”

“And that in the rain is why we lost out so much. So not to make a mistake, and be second and third under these conditions, shows what potential is in the car.

“But we don’t regret anything. It’s not just about Singapore, it’s Malaysia, and Suzuka, they’re all circuits for us,” explained Marko.

Whatever the case, with the Red Bull duo starting way down the grid fans can expect fireworks as they fight their way back to their regular positions at the sharp end of the field.