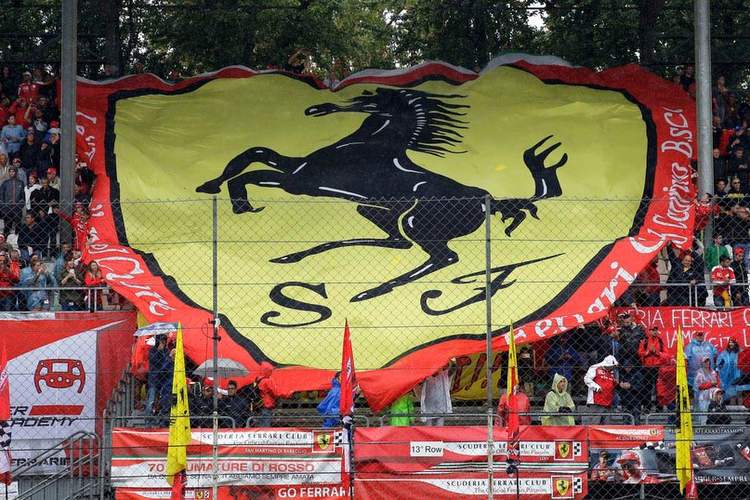 The fans flocked to the party, the team wore celebratory uniforms and the boss admitted emotions were running high, but when it mattered in qualifying Sebastian Vettel and Kimi Raikkonen did not deliver for Ferrari

Granted the weather failed to oblige when Ferrari hoped to mark their 70th anniversary at this weekend’s Italian Grand Prix with a memorable tribute to team founder Enzo Ferrari, but the trouncing they received will be tough to swallow and only victory on Sunday will sweeten the circumstances.

Torrential rain, overnight and throughout the day, reduced final practice and qualifying to near-farcical washouts.

The decisive afternoon session was curtailed after only five minutes when Frenchman Romain Grosjean aquaplaned and crashed his Haas car on the straight, leaving thousands of the devoted ‘tifosi’, sitting behind their Ferrari banners and flags in the grandstands, to wait for the rain to clear.

When qualifying resumed three hours later, expectations were high in the stands. But the reds on track did not deliver as they were soundly trumped by arch rival Mercedes and their title contending driver Lewis Hamilton.

Ferrari simply did not get their act together in the tricky conditions that prevailed during Q3.

When the chequered flag waved there was near silence and all around disbelief as the beloved red cars were seventh and eighth, Raikkonen a tad quicker than Vettel. A poor show with so much expectation riding on them.

Perhaps the only positive being that both Red Bull drivers – who were second and third in the session – will drop back to the rear of the grid due to grid penalties for engine changes,

Thus the Ferrari pair will be promoted from the fourth row on the grid to the third row, and all hopes will now rest on their race pace making the difference in the grand prix.

Vettel summed up the below par afternoon, “I have no idea what the problem was. I was surprised by how quick the others went. At this stage we don’t know why. It was an important day but it is what it is and we will see how it goes tomorrow.

“We have a good car so we don’t need to be afraid. The car is quick – we know that and you can overtake here – it should be a fun race.

“Years ago we were able to run in the wet. It is fine for us – we are sat in the dry but for the fans out there it is pretty ugly,” added the German who has won the Italian Grand Prix occasions but never wearing the red of Ferrari.

Raikkonen was typically forthright with his post-qualifying comments “We’re not fast enough. For my car, I struggled a lot with the grip. Maybe we don’t make the tyres work – whatever it is it’s very slippery.”

Before the start of qualifying Ferrari team principal Maurizio Arrivabene savoured the occasion, “It’s unbelievable. The atmosphere, the tradition, the history… Even Enzo Ferrari was talking always about the Italian Grand Prix as the Grand Prix.

“This is the emotional part. The public is fantastic. We can feel the vibe. I think even on Thursday we were feeling it, all of us, the team, the drivers – they could feel the vibe of the tifosi and they were pushing us…

“The expectation is very, very high. Despite that, we need to be humble because we know the nature of this year’s and we know that Monza is not really the best track for us.

“Having said so, our attitude will be humble, but not surrendering.”

For Vettel, the storms that lashed Monza on Saturday would have brought back vivid memories of his maiden F1 victory in similar conditions on the famous old track in 2008.

Not only was it his first triumph, but he also registered Toro Rosso’s first pole and victory in the process, inspiring an affinity with the Italian fans that has stayed with him and only intensified as a Ferrari driver.

After weeks of speculation, Ferrari confirmed in Belgium that Vettel had agreed a new three-year contract – a signal that he remained intent on ending their 10-year wait for a drivers’ title.

The last Ferrari drivers’ champion, by an ironic quirk of history, was Vettel’s current teammate Kimi Raikkonen, who produced a late surge of results to take the crown in 2007.

Vettel arrived in Monza with a seven-point lead over nearest rival, Briton Lewis Hamilton of Mercedes, knowing that another win by the Englishman would enable him to take over as championship leader for the first time this year.

“It’s not extra pressure to be at Monza,” said Vettel. “It’s special, yes, but it is enjoyable. It is our favourite race, of course, and the support helps to push us on, but the season will go on.”

Vettel has won twice before at Monza, but never in a Ferrari and knows that a victory on Sunday would not only confirm his place as championship leader, but also deliver a blow to Hamilton’s hopes of mounting a late-season surge.

And, in front of Ferrari’s chairman and chief executive officer Sergio Marchionne, it would also give the tifosi a good excuse to enjoy a 70th anniversary party on Sunday.

Big Question: Too much pressure on Ferrari at Monza?