Ricciardo: I do not feel that Max eclipses me in any way 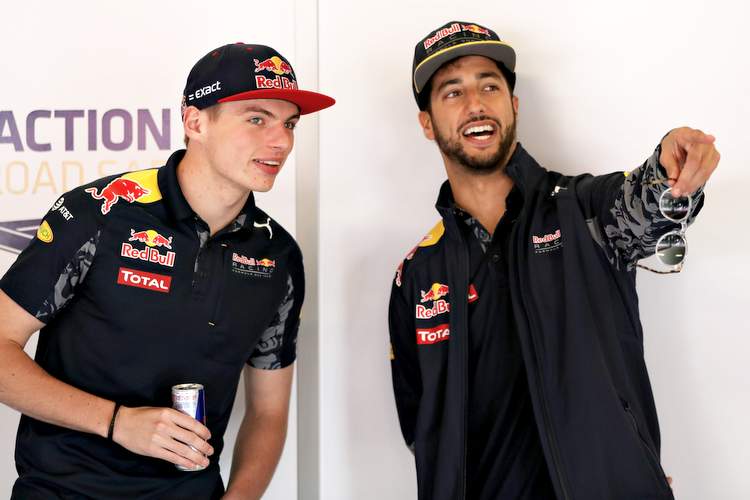 Daniel Ricciardo was joined by Max Verstappen at Red Bull, five races into the 2016, and since that day the teenage Dutchman has hogged the limelight, but the big smiling Australian is not fazed by this and instead does his talking on track with results.

In the wake of an unexpected, but well deserved third place at the recent Belgian Grand Prix, Ricciardo spoke to El Confidencial about the dynamics in the team right now and his approach to racing alongside the sport’s fastest rising star.

“You have to be relaxed,” explained Ricciardo. “I’m very, very serious in the car, but when I have to talk, the press, the engineers or whoever I am , I always try to be calm, and besides, I have things that interest me out beyond F1. For example music, I usually go to many festivals. I try to seek balance to life.”

Despite a below par Red Bull package at his disposal this year – compared to Mercedes and Ferrari – Ricciardo has scored six podiums in 12 rounds thus far and going against the odds to win the Azerbaijan Grand Prix in the process.

Life on the other side of the Red Bull garage has been more complicated, with luck having deserted Verstappen for much of this season. He has six DNFs on his scorecard and only one podium to brag about. Of course the situation has grabbed countless headlines and generated heated debate.

But this does not affect Ricciardo who gets on with his job, delivering on track as he did at Spa-Francorchamps when he turned fifth place into third in an astounding move on the brakes towards Les Combes – passing Valtteri Bottas on the outside and fending off Kimi Raikkonen at the same time.

A move that was hailed as the “best ever” by Red Bull billionaire Dietrich Mateschitz. Despite this, one of the biggest talking points in the wake of the Belgian Grand Prix was Verstappen’s run of bad luck and another DNF.

Ricciardo shed light on how he feels, “If I’m honest, I do not really care about what’s going on in the media, and I do not take that kind of comments from my bosses personally. I know I have a good relationship with Red Bull and I ‘ve always been loyal to the team.”

“They never seek to discriminate against me in any way, and from their point of view I understand why they are the way they are over Max. I am proving that I am a good driver. I do not feel that Max eclipses me in any way, the point is that he has a lot more coverage in the media.”

The pair have been getting on famously as teammates, even after Verstappen punted him out of the Hungarian Grand Prix on the opening lap.

Of course Ricciardo was livid immediately after the race, but Verstappen was man enough to apologise to him face-to-face and harmony was restored within the energy drinks camp.

But he admits that he was angry after the incident at the Hungaroring, “When it happened I was really upset. I even insulted him over the radio. [Called his teammate a bad loser]. After the race we had a meeting, talked to Max alone and I was completely calm .”

Ricciardo has a knack for opportunistic drives, being patient and seizing the moment at the exact right time, “The key is in my mind, even if I do not make a perfect start, I learned that in the race anything can happen. I think the same thing even if the first pit stop is too long. I never think I am totally defeated.”

“I never finish the race regretting that I did not overtake someone or did not do something else. If I can do something, I do it,” insisted Ricciardo who heads to the Italian Grand Prix, at Monza this weekend, fourth in the drivers standings.