Hamilton: I look forward to turning Vettel’s smile upside down 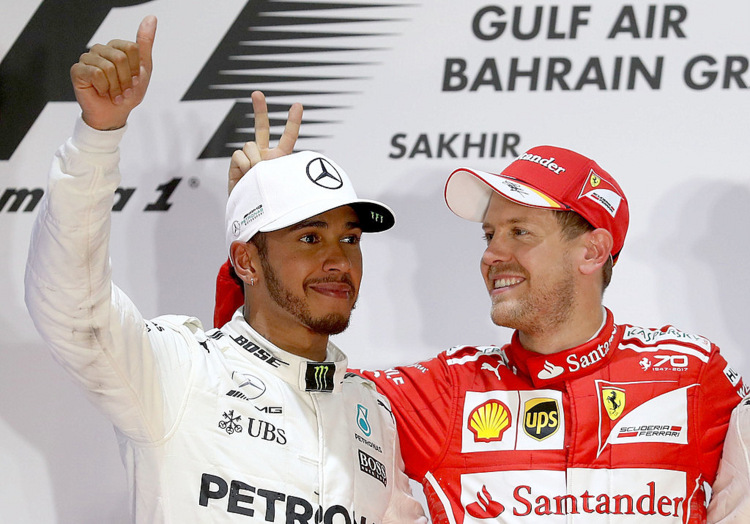 If Lewis Hamilton breaks Michael Schumacher’s record of 68 Formula 1 pole positions on Saturday, it will be quite an accomplishment for the Mercedes driver.

Hamilton’s ultimate goal, though, is to win the Italian Grand Prix on Sunday and replace Ferrari rival Sebastian Vettel atop the drivers’ standings.

Hamilton recalled how he dominated qualifying at Monza last year then wasted the pole position with a poor start in the race and finished second to teammate Nico Rosberg. The German went on to win the championship and then promptly retired.

“So the race is the most important part of the weekend,” Hamilton said Thursday. “This weekend the ultimate goal is to win, to put a dent in that lead that [Vettel] has had all season.

“He’s had that smile on his face all year long being that he’s had that lead,” Hamilton added. “So I’m looking forward to turning that upside down.”

Vettel, however, will be looking to strengthen his bid to become the first Ferrari driver to win the F1 title in a decade – and put an exclamation point on the Italian automaker’s 70th anniversary celebrations this weekend.

Hamilton needs one more pole to break his tie with Schumacher and claim his 69th pole position. Setting the mark in Monza, where Schumacher is still revered for having won five of his record seven drivers’ championships with Ferrari from 2000-04, could provoke a strange reaction from the throngs of red-clad Ferrari supporters that attend the race each year.

As would a victory on Sunday by Hamilton.

No matter who wins, though, the fans always rush onto the track for the most memorable podium celebration in the sport.

“It’s a unique design of podium for sure, because you’re towering or hanging over a sea of fans, which you don’t get to see anywhere else,” Hamilton said. “I think it’s amazing. I don’t know why the other tracks don’t design that.

“It’s always a sea of red,” added Hamilton, who has won the race three times. “I would imagine for a Ferrari driver it’s an incredible experience being so close to the fans. You can almost lean over and touch them. It’s also a very historic circuit so you think about all the greats who have been up there. Growing up watching TV and watching Michael stand up there and now you’re standing up there.”

Vettel leads Hamilton by seven points but could be hard-pressed to match Mercedes’ outright power on a circuit featuring long straightaways and high-speed curves.

Vettel pushed Hamilton to the limit in Belgium last weekend but the Briton ultimately won.

“There are some things I learned from Spa and we learned as a team and I as a driver,” Vettel said. “Here it’s a different track and generally it’s possible to overtake. The track layout suits Mercedes but the performance we showed last week gives us hope.”

Amid such a tight title race with Vettel, it will be interesting to see if Mercedes orders Valtteri Bottas, the team’s second driver, into more of a supportive role for Hamilton. Bottas stands third, 41 points behind Vettel.

“I personally have not spoken to the team. That’s not really my job and that’s not how I like to operate,” Hamilton said. “You would hope that at some stage the team makes a decision on their own.”

Not that Hamilton has any qualms with Mercedes. In fact, after Ferrari’s announcement last weekend that it was extending Vettel’s contract for three more years – longer than many expected – it means Hamilton will likely stay put for a while.

Hamilton said he plans to extend his contract, which expires after next season, by the end of this year, “It’s good that Seb signed there. I think all things happen for a reason. That piece of the puzzle is now in place so it makes my decision moving forward a lot easier.”

Big Question: Whose smile we be turned upside down at the end of the season?