Horner: Come on Renault get your act together! 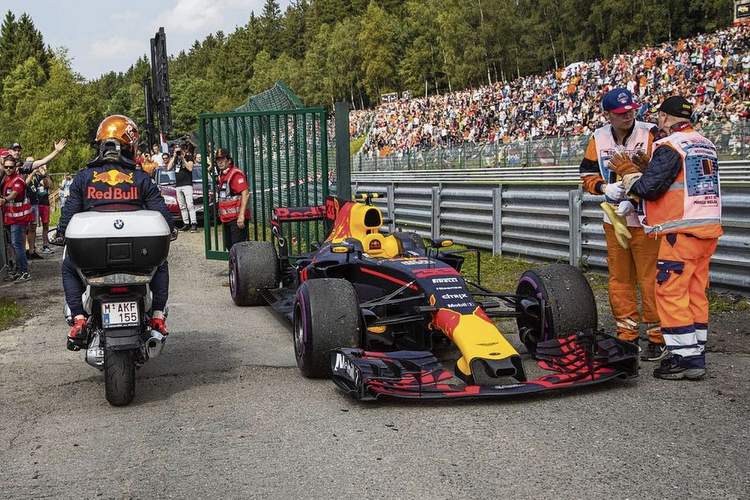 Christian Horner has directed stern criticism at Renault after Max Verstappen suffered an engine failure during the early stages of the Belgian Grand Prix, the Red Bull chief warning the French engine supplier to get their act together.

Horner said in the wake of the race at Spa-Francorchamps, “Renault are quite aware that their reliability and product are not where they should be, and that is their business to sort that out.”

“We are a paying customer. And it is below par, the service that we are seeing now because of reliability issues, failures, we are staring down the barrel of a whole bunch of penalties in Monza. It is not where we should be.”

“It is Renault’s business. We pay a hell of a lot of money for the engine. And they need to sort it out, it is hurting them as much as it is hurting us. At this level you can’t afford the kind of failures we are consistently seeing.”

Red Bull and Toro Rosso are using Renault power units this year after Red Bull decided to end their junior team’s engine deal with Ferrari. But they too have been plagued with relaibility issues.

Horner explained, “It’s difficult to know what happens in every session, you’re a customer team. But reliability across the three teams is pretty dire. Turbo failures with Kvyat, engine failures, engine replacements that we’ve had to happen on two cars as we’ve come here.”

“It’s not great. It’s far from great. It’s not the level that an engine supplier that wishes to be competitive in Formula 1 should be at. They’re working hard at it, and hopefully pulling in to place a process to avoid those kind of issues.”

“It’s enormously frustrating but you got to take a bigger view so you can’t get caught up. Here and now it really hurts, and it really hurt Max because it’s his home race, massive crowds, huge support, he’s in a great position, and his engine has failed on him. That’s hugely frustrating for him and of course the support group that he has around him.”

“But that needs to change. But unfortunately as a team that’s something that’s beyond… it’s an element that we don’t control. It’s beyond our control. So all we can do is put pressure on our supplier, like any supplier, to say: come on, get your act together!.”

Meanwhile Renault chief Cyril Abiteboul saw it necessary to apologise after the race at Spa-Francorchamps, “An electronic systems issue seems to be at the heart of this problem.”

“I personally apologise to Red Bull Racing and more specifically to Max and his many fans who are as disappointed as we are. We will work closely with RBR to define a course of action and a roadmap to eradicate issues,” added Abiteboul.

Animosity between Red Bull and Renault is not a new thing as the two organisations – who shared much success together from 2010 to 2013 – were at loggerheads soon after the advent of the new hybrid turbo era. Renault were woefully unprepared for the new engine formula despite being the manufacturer who led the campaign to change to the current regulations.

The bad blood between the two organisations – Horner and Abiteboul in particular – endured for over a season and at one stage it seemed that the Red Bull and Renault would split, but with no alternative power unit supplier for the energy drinks outfit, a truce was declared and Renault engines bolted to the Red Bulls were badged TAG Heuer.

Now in the fourth season of the new era, Renault are still lagging well down on Mercedes who have dominated since 2014, while this year Ferrari have found a great deal more performance and are now almost on par with the Silver Arrows.

Red Bull with Renault power are now firmly shackled to third place in the pecking order and it is interesting to note that during the heyday of their partnership Renault were only an engine supplier and did not have their own Formula 1 team as they do now, since last season.

Stats show that Renault powered Red Bulls have won six grand prix races since the start of 2014, Ferrari has seven victories to their credit during this period with Mercedes having won the remaining 58 races to date.

Big Question: Can Red Bull be a title winning force again with Renault?