Hamilton: Why’s the Safety Car out? 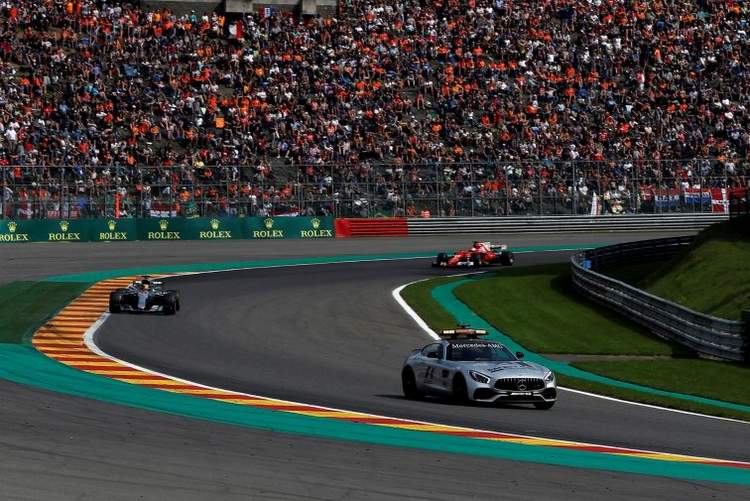 Lewis Hamilton took issue with Formula 1’s race direction on Sunday, suggesting the safety car was deployed for longer than necessary at the Belgian Grand Prix to make the race more exciting.

The safety car was deployed on the 30th of 44 laps and stayed out for four while marshals cleared up debris from a collision between Force India’s Sergio Perez and Frenchman Esteban Ocon.

The re-start proved a key moment of the race, with both Hamilton and Vettel on fresh tyres after pitting but with the German on the faster ultra-softs that threatened to give him an advantage over the softs.

“Why’s the Safety Car out?” Hamilton asked his team over the radio. “There literally is no debris. That is a BS call from the stewards.”

Hamilton managed to hold off Vettel at the re-start, but only just, and then pulled away with the race settling down as before.

The Briton told reporters that he had actually benefited from an error which left him in the wrong power mode, allowing Vettel to pull level at the first La Source corner but denying the Ferrari driver a chance to get a subsequent run at him downhill to Eau Rouge.

Immediately after the race he suggested the safety car deployment had been a bit “like NASCAR where they keep pulling out the safety cars for no reason”.

“I guess they (the stewards) wanted to see a race, so that’s for sure the reason they did that because there was hardly any debris,” he said.

Hamilton eased off a little on the criticism later, “At the end of the day it doesn’t matter now, but there was no-one in harm’s way on track. You could say the marshals had to come on to clean up but they did it quite quickly. Then we did all those laps behind the safety car and it just opened up doors.”

“At the moment I was frustrated. I’ve led the race and it’s been this close and then we do that stop and I’ve not got ultra-softs available to me and it feels a little bit weighed up against you. But it’s cool. I just sucked it up and kept pushing,” explained Hamilton.