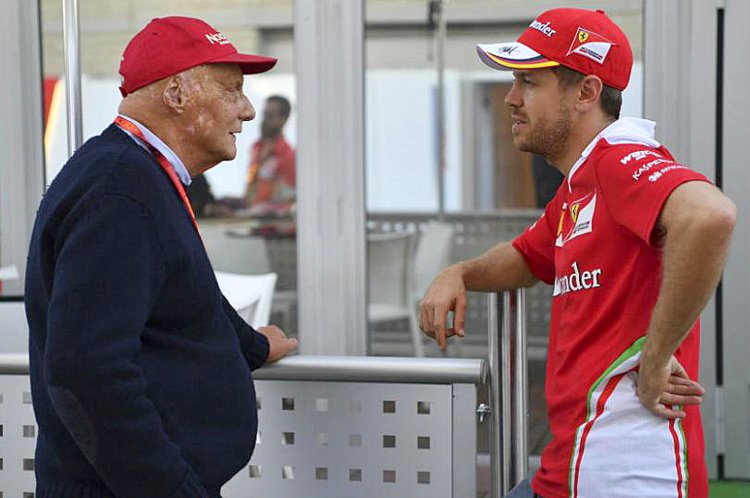 Mercedes team bosses Toto Wolff and Niki Lauda were seemingly at odds on Saturday over whether there had been any discussion with Ferrari’s Sebastian Vettel over a move to the Formula 1 champions.

In the end, it all came down to the definition of a conversation.

“There was zero discussions with Sebastian around a contract between him and Mercedes,” Wolff told reporters after Ferrari announced that the German had agreed a new three-year deal keeping him at Maranello until 2020.

The announcement ended persistent media speculation that four-times world champion Vettel, who had been out of contract, could make a shock move to Mercedes next year.

Lauda, the team’s non-executive chairman, had earlier told Britain’s Sky Sports television at the Belgian Grand Prix that there had been some dialogue.

“We discussed it briefly once with him, but the more competitive Ferrari goes, the less the reason he would want to leave,” said the retired triple world champion, an Austrian, like Wolff.

“So therefore we stopped right away a couple of months ago,” he added, suggesting that it was natural for any driver to talk to more than one team when negotiating a new deal.

Wolff suggested Lauda, also a pundit for German television, and Vettel, the championship leader, might simply have crossed paths in the paddock and exchanged a few words.

“Sometimes you are like: What are you doing? What’s happening? No discussions did take place. Zero,” said the Mercedes motorsport head.

Wolff also attended a private birthday party for Vettel in Switzerland in July but he said nothing was discussed then, either.

”Have you ever got me not saying the truth in the five years I have been here?“ he asked. ”I don’t deal in lies … what I am saying to you is there were zero conversations with Sebastian over a contract.

”Niki has a chat over coffee with Sebastian down there and says: What are you doing, by the way, for the next three years?’ and Sebastian says: Well, I’m thinking about it.’

“They had a conversation. They didn’t have coffee, actually. I think it was just crossing each other.”

Pressed on the issue, with the media mindful that Lauda had been the man who led the discussions with Lewis Hamilton that ended with the now-triple world champion leaving McLaren for Mercedes, Wolff tried again.

“Do you consider a conversation a crossing of each other by coincidence in a paddock and saying: Maybe one day we should have a chat? It is a conversation but it is not something I would judge… There was nothing beyond that,” explained Wolff.