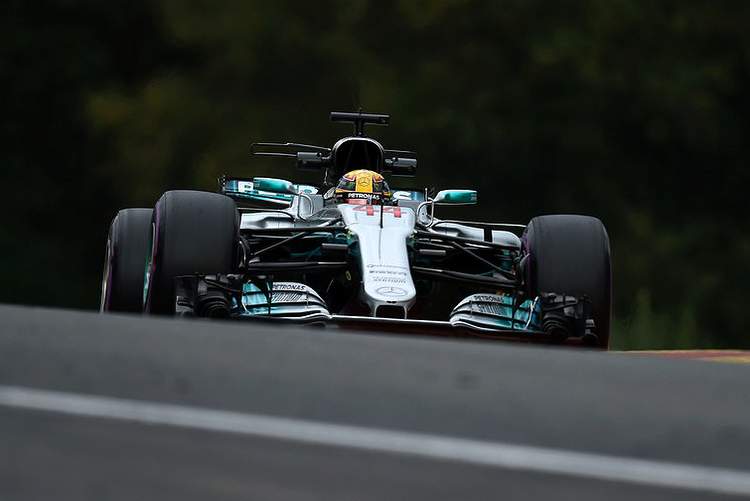 Lewis Hamilton topped the timing screens at the end of the second free practice of the Belgian Grand Prix weekend, before the rain arrived to drench Spa-Francorchamps for the final half hour of the session and prevent anyone going quicker.

The Mercedes driver’s best lap time of 1:44.753, set using the Pirelli ultrasoft tyres was a quarter second up on Kimi Raikkonen in the Ferrari, who was quickest of all in the morning session.

Fellow Finn was third quickest in the other Mercedes, albeit 0..427 of a second down on the top time set by his teammate.

Max Verstappen gave his legion of fans something to cheer about as he ended the 90 minutes session third quickest, also four tenths down on the benchmark time. But teammate Daniel Ricciardo, did not find the sweet spot before the rain came down. The Aussie was fifth fastest but 1.3 seconds off the pace.

Splitting the Red Bull pair, in fourth, was Sebastian Vettel who was two tenths down on teammate Raikkonen, and 0.482 down on championship rival Hamilton. But it was clear that the German was focusing on race pace, which was around seven tenths per lap up on Hamilton, with Bottas a further tenth down.

Prompting Mercedes chief Toto Wolff to observe, “It’s very close. I think it’s closer than you can see. Vettel did a fantastic long run, which was much faster than everyone else.”

Nico Hulkenberg showed some handy pace in the Renault, finishing seventh quickest, with Jolyon Palmer in tenth – four tenths down on his teammate.

Force India’s Esteban Ocon was fastest of the Mercedes customer teams in eighth, ahead of ninth placed Carlos Sainz in the Toro Rosso.

Williams driver Felipe Massa, who crashed his early on in FP1, was forced to watch from the pitlane as his crew repaired the extensively damaged car and was thus unable to partake in the session.

Toward the end, thunderous rainfall drenched the vast 7-kilometer Spa-Frnacorchamps circuit that winds through the Ardennes forest, heavy rain laden clouds enveloping the area in darkness.

“Aquaplaning already. Lot of water everywhere,” reported Ricciardo before seeking refuge back in the team garage, along with the other drivers. 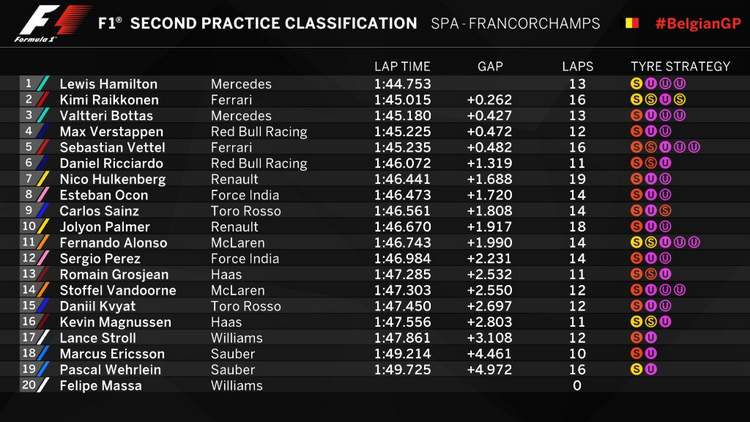