Hamilton: One of our strongest Fridays so far this season 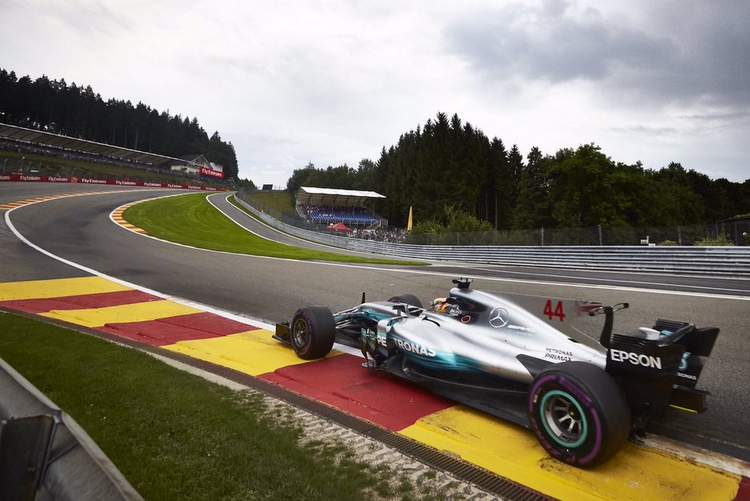 Lewis Hamilton prepared for his 200th Formula 1 race with plenty of confidence and set the fastest time on the first day of the Belgian Grand Prix weekend, before rain brought an early end to the day’s action.

The Mercedes title contender, who can equal Michael Schumacher’s all-time record of 68 pole positions in Saturday’s qualifying, lapped the longest track on the calendar with a best time of 1:44.753 seconds before the rain set in with 20 minutes remaining.

“Today felt like one of our strongest Fridays so far this season,” said Hamilton, who is 14 points behind Ferrari’s Sebastian Vettel with nine races remaining.

“The car felt strong all round, straight out of the box. We made some good steps with the set-up right from the start of FP1 (first practice), which is a really encouraging way to kick off the weekend.

“It looks tight at the top on the long-run pace, but we’ve started the weekend in the best way possible.”

Ferrari’s Kimi Raikkonen, who had been fastest in the morning session with a time of 1:45.502 on ultrasoft tyres while Hamilton stayed on softs, was second on the timesheets with an afternoon best that was 0.262 slower than the Mercedes driver who also used ultrasofts to set his best lap time.

“We need to keep on working, as normal, and improve things for tomorrow and hopefully we’ll be stronger,” said Raikkonen, a four-times winner in Belgium.

Valtteri Bottas, Hamilton’s teammate, made it two Finns in the top three while Red Bull’s Dutch teenager Max Verstappen kept his travelling orange army of fans happy with fourth in both sessions.

Verstappen was fastest in last year’s Friday practice, and went on to put his Red Bull on the front row, but the new cars are significantly faster and Hamilton was more then three seconds quicker.

Vettel was third and fifth, just 0.01 slower than Verstappen, respectively, in Friday’s sessions.

The first session was halted after 15 minutes when Brazilian Felipe Massa, who missed the previous race in Hungary after feeling dizzy in practice, crashed heavily into the tyre barrier at turn seven out of Les Combes.

He was taken to the medical centre for checks, before returning to the pitlane, with his team beginning the long job of rebuilding the car.

Massa did not take part in the second session, with Williams saying the changed chassis could not be readied in time and would have to be resubmitted for scrutineering on Saturday morning.

“It was my mistake and I feel really disappointed to do only one lap in the day,” said Massa. “Tomorrow will be a day to learn everything from zero. I didn’t feel dizzy any more since the week after Hungary. For sure, I didn’t crash because of that.”

Fernando Alonso suffered an early lack of power in his McLaren, but still ended up 13th fastest. The Spaniard was 11th after lunch.

His Belgian teammate Stoffel Vandoorne, who will start his home race last on Sunday thanks to a 35-place penalty due to a power unit change, was 10th and 14th.