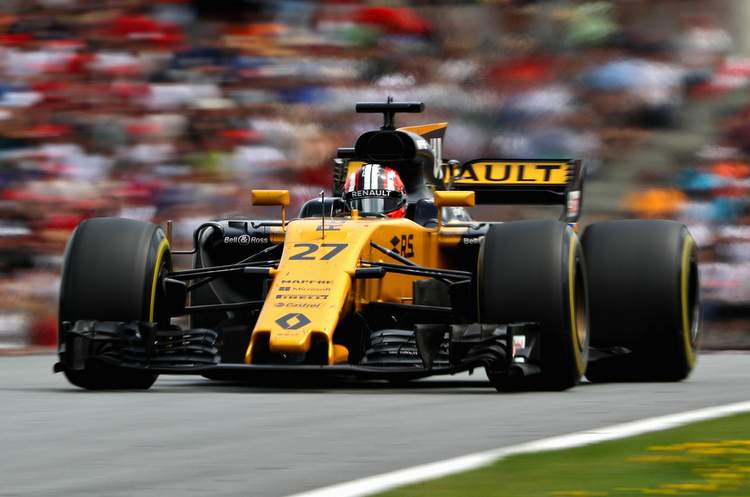 Renault driver and teams preview the Belgian Grand Prix, Round 12 of the 2017 Formula 1 World Championship, at Spa-Francorchamps.

Foreword from Renault Sport Racing Managing Director, Cyril Abiteboul: “The Belgian Grand Prix marks the beginning of the home stretch of the season and it’s vital that we hit the ground running by making a return to the points.”

“Hungary could have been a very strong weekend for us but the results failed to materialise. This was frustrating given we proved throughout the weekend in Budapest that we had the pace to be competitive and be in contention for a good haul of points from both drivers.”

“This highlighted the progress we have made in 2017. We have proved, on a number of occasions, that we have the ability to comfortably run inside the top ten and have shown we are well in the mix to be the best of the rest behind the top three teams. Weekends such as China, Bahrain, Spain and Great Britain showed what we are capable of doing, and there are nine more races to really underline our progression and make a mark.”

“These improvements have been down to the hard work being put in at Enstone and Viry, by our passionate workforce. We are focusing on the areas needing attention, and making the necessary improvements and changes.”

“Clear steps are being made and we are heading in the right direction in terms of pace and reliability. The summer break came at a welcome time as we had the opportunity to reflect on these past few months and take a recharging period.”

“It would be impossible not to mention Robert Kubica’s test outing in the R.S.17 at the Hungaroring test, which was a very productive day from all involved. Robert’s journey back to an official Formula 1 test session is an incredible story and he delivered well on the day. He followed Test Driver Nicholas Latifi at the test, with both drivers contributing to our development of the car. Both Nico and Jolyon should benefit from the progress made at the test when they hit the track at Spa.”

“We are excited to get out to Belgium and restart the season on a bright note, but in order to do that we need to stay focused and work hard together as a team. Finishing the season in fifth is our objective, but it will take resilience and determination from everyone at Renault Sport Formula One Team.”

Engine Technical Director Remi Taffin explains how there is more to come from the R.E.17 and what can be expected from Spa; a circuit which demands high power output.

What can we expect from Spa?
RT: We have the potential for a good result. Over the last few races our cars have been performing well and I can’t see any reason why Spa can’t continue that trend. Spa has high speed corners as well as a few straights which can be a real test. We have to deal with the challenging section between La Source through to Les Combes. Drivers are full throttle for almost 2km and encounter the notorious Eau Rouge which will be fully loaded in this year’s cars with a lateral force of -3g. Spa will be strenuous on the power unit given around 67% of the lap is spent at full throttle. But we have drivers driving well, a chassis that is performing well and an engine which is on track; it’s all pointing in the right direction.

How is performance looking?
RT: We know we’re not the fastest on the grid, but as a team we are showing we are the force after the top three. Qualifying pace has looked good with Great Britain and Hungary exemplifying our ability to be the fourth best team. It’s just a case of building on that and bettering the race pace.

That comes from levelling up everything, we need to show off reliability and mileage and that is something we are giving close attention. We are on a good trend and we will keep adding performance in terms of both aerodynamics and engine so hopefully this can be seen in the upcoming races.

What have we got planned for the remainder of the season?
RT: Spa and Monza will see new software and hardware updates. We are looking at Monza as a benchmark as it could provide a clear picture of the ranking of the engines. Being in the top ten will be a good result as these next two circuits are power-hungry. After Monza, we have more races and more things in the pipeline, the next two months will be important for the 2017 season outcome.

Nico Hülkenberg is primed and ready to harness a good balance and equilibrium on a fast and unique Spa circuit.

What are your thoughts on Spa?
NH: It’s one of my favourite tracks and certainly up there with the best in the world. The forest there is amazing and the track itself sits in some outstanding scenery. It features a lot of elevation and of course, it has Eau Rouge. When you see these bends in real life it’s special but when you drive them, especially in a Formula 1 car, it’s super special. Eau Rouge is going to be flat which is exciting and Pouhon too will be good and extremely fast.

How difficult is it to put a good lap together?
NH: There are many corners and it’s the longest lap on the calendar which makes a good balance very important. It’s about putting those sectors together and being on top in every corner, that will give you a good lap time and that’s the key challenge of Spa. I like the middle-sector in particular. It’s quite busy, flows quite well and is just fun to drive. Spa is known for its strange and random weather, so we have to make it count whether it’s wet or dry.

What were your thoughts on the first eleven races?
NH: It’s been very encouraging, especially in the last few races. I’m pleased with how the car is feeling and the progress we are making. We are heading in the right direction and are looking competitive, but we want to keep pushing ourselves. It was a shame to finish how we did in Hungary, but in general there are positive feelings. We’ve found a good balance with qualifying performance and race pace – Silverstone highlighted that – it’s at a better level now. This year’s cars are fun and faster, allowing me to push harder which suits my driving style a lot more than in recent years.

Out of the blocks

Spa kick-starts the second-half of the season and Jolyon Palmer is keen to hit the ground running with a bright outing on the legendary circuit.

There are some cool corners at Spa, what are they like to drive?
JP: The first thing that hits you is Eau Rouge, it’s just incredible. You see it on TV, or on the on-boards, and it looks awesome but to drive it is simply immense. Nothing prepares you for heading flat out down the hill and then coming up the other side and down that straight. Pouhon will be an exciting corner this year, it brings a real challenge as it’s a very quick double apex left. Blanchimont is flat and leads into the Bus Stop chicane, which is a great overtaking place.

How have you fared in your races in Spa?
JP: I won a race in Spa back in 2008 in the Formula Palmer Audi series. I remember it was wet – which is fairly typical for Spa! I’ve been on the podium in GP2 there but missed the win in that class. I was on the front row in 2014 in GP2 and had a decent F1 qualifying last year. I’ve had some good memories but I’m driven to make some more.

How do you sum up the first eleven races?
JP: It’s been challenging, but there is definitely good potential from me and the car. The 2017 regulations mean a car that’s very different from before, so you have to relearn how to extract the maximum performance from it. Getting the right set-up is difficult and this is compounded when you miss out on track time for whatever reason. I’m looking forward and focusing on my own performance and I’m working hard to understand everything to ensure I have good races.

Did you enjoy the summer break?
JP: It was good to have a bit of chill out time and recharge a little bit. I climbed Mount Kilimanjaro which was very tough but also highly rewarding. It was nice to be cut off from the world for a week and see a change of scenery, but I’m ready to get back to work again.

Spa-Francorchamps is one of Formula 1’s historic races. Located deep in the trees, the circuit features fast bends, sharp elevation changes and boasts total unpredictability. Eau Rouge is amongst the most notorious of corners across any circuit in the world. With its 18% gradient, drivers hold tight and pray for grip through the left, right and left downhill then uphill combination which challenges car and driver alike.

Soft (yellow) – Pale Lager – light in colour but heavy and bitter in taste.
Supersoft (red) – Flemish Red – a sour ale brewed in West Flanders; distinct in colour and has a real character.
Ultrasoft (purple) – Lambic – brewed in the Pajottenland region, dry and sour with potential for a sharp aftertaste.

Spa is the hardest circuit of the year for the Power Units. Over 67% of the 7km track is spent flat out, which translates as around 73secs per lap, the longest accumulative wide open throttle time of the year. The first period of sustained throttle is the climb from the La Source hairpin to the chicane at Les Combes. It takes around 25secs (1,852m) with the driver flat on the throttle throughout. The distance is only slighter shorter than a runway at Charles de Gaulle airport.

The track drops over 40m from La Source before climbing over 80m back to Les Combes, equivalent to a gradient of 1 in 4, or one of the steepest mountain climbs in the Tour de France. The descent compresses the internals but going over the crest of the hill, the vertical force is suddenly lifted and the parts unloaded, with the vertical forces switching to -3g. It can be equated to the feeling on a rollercoaster drop when your body feels compressed and pushed down into the seat but weightless when you go over a bump.

The turbo will be rotating at close to its maximum to keep pace with the high rotational speeds of the ICE. The altitude will further increase rpm. At its most extreme the turbo will be spinning at more than 95,000rpm or over 1,500 revs per second!

Spa is one of the most demanding tracks on the MGU-K. Each of the braking points comes after a long burst of power so the energy dissipated through the brakes is enormous. The best opportunity for the MGU-K to recover energy is the Bus Stop chicane, which the driver approaches at well over 300kph and brakes down to just 75kph.

High-speed flowing corners such as Pouhon and Fagnes are the best opportunities for the MGU-H to recover energy. It will feed this energy to the MGU-K and ICE on the next period of throttle through Blanchimont.