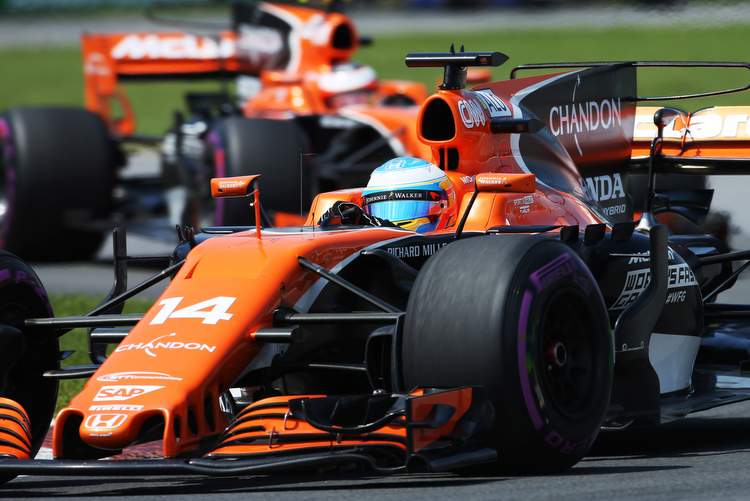 Spa-Francorchamps is one of the most revered racetracks in the world – its fast, undulating sweeps are a stern test for car and driver, and with an average speed approaching 233kph, it’s one of the fastest laps of the season.

The circuit is inextricably linked with McLaren because it was here, in 1968, that the team scored its first world championship grand prix victory in the hands of Bruce McLaren

Fernando Alonso: “I love the first race after the summer break! It’s a great feeling to come back feeling rested, relaxed and recharged, and ready to go again for the second half of the season. I’ve enjoyed time away with family and friends, worked hard on my training and now I’m really looking forward to getting back in the car.

“Spa is incredible – for many of us it’s one of our favourite tracks. It’s got a legendary reputation and it’s totally deserved. The feeling when you drive Eau Rouge is completely different to any other corner on the calendar. You’re so low in the car and the gradient is so steep that as you go up it you can only see the sky – it’s completely surreal.

“As the season goes on we’re getting stronger and stronger, and I hope the second half of the year will bring us some more points-earning finishes. This race is a difficult challenge for the whole team – the engineers and the mechanics – as you’re on the throttle for almost three-quarters of the lap, which makes it’s a tough circuit for both the car and the driver. We know we’ll have to work hard to get any kind of result there, but it’s a long lap and there are plenty of overtaking opportunities, so we’ll keep pushing to get everything we can from the weekend.”

Stoffel Vandoorne: “I’ve been looking forward to driving in my first Belgian Grand Prix as a Formula 1 driver for so long. It’s exciting for any driver at their home grand prix because it’s always a special weekend. It’ll be great to have the backing of my home crowd, and there’ll be a lot of fans out there, as well as family and friends coming to support.

“After a busy first half of the year you always look forward to a holiday, but after a few days I already wanted to be back in the car! But it’s been good to have a bit of a break, reflect on what’s happened in the last few months, analyse the good things and the bad things, train hard and then come back even stronger in Spa for the second half of the season.

“The start of the season has definitely been challenging – not only from my side but for the team as a whole. We’ve suffered a few problems which have hampered our running, and I think maybe from my side it took a bit more time to really understand what I needed from the car because of those problems. However, more recently we’ve been seeing the results of a lot of hard work I’ve been putting in with the engineers and with the team back at the factory. Everything we’ve been working on has been a good step, and from that we’ve seen positive progress. The margin for improvement is still significant and there’s more good things to come, so I’m hopeful the next few races will be promising for us.”

Eric Boullier, McLaren-Honda Racing Director: “Going racing after the summer break is always a good feeling. We’ve all had the chance to recharge our batteries and spend valuable time with loved ones, and now we’re raring to go racing again. The Spa-Francorchamps circuit is always a special race for the team, and this year’s Belgian Grand Prix will be even more poignant.

“Firstly, it’s the home race for our very own Belgian driver Stoffel, who will be tackling his favourite circuit as a Formula 1 driver for the very first time. Secondly, Spa is the venue at which our founder, Bruce McLaren, won his first-ever grand prix for his team in 1968. What’s more, this year we’ll be celebrating another very special milestone: Bruce would have celebrated his 80th birthday on 30th August, so on Sunday we’ll be honouring his incredible legacy with a fitting tribute.

“We’ve certainly endured our fair share of ups and downs in the first half of the year, but we still have our sights fixed firmly on our goals for the end of the season and there are nine more races to demonstrate the fruits of the incredibly hard work we’re putting in behind the scenes. It’s a long season, and there are plenty more opportunities for us to push hard and score valuable points. Our reward will be continued progress, and I hope we can show the enthusiastic Belgian fans an enjoyable weekend of racing.”

Yusuke Hasegawa, Honda R&D Co. Ltd Head of F1 Project & Executive Chief Engineer: “After having a short but refreshing summer break, we’re now heading to Belgium to start the second half of the season.

“Spa-Francorchamps, one of the most popular and historical tracks on the calendar, is a tough circuit for the car with the long straights and various high-speed corners.

“It’s also said to be one of the most difficult but favourable tracks for drivers, as they are able to prove their own skills and courage through some difficult sections such as Eau Rouge, one of the toughest corners on the calendar.

“McLaren Honda had a positive wrap-up of the first half of the season in Hungary with a double points finish in the race and also collected some precious data for improvement at the in-season test.

“Now on to the second half, we see Spa-Francorchamps as a challenging circuit for us with its power-hungry features, however we will try our best to have a good race and maintain the momentum we acquired in Hungary.”