Vettel and Raikkonen set to stay at Ferrari 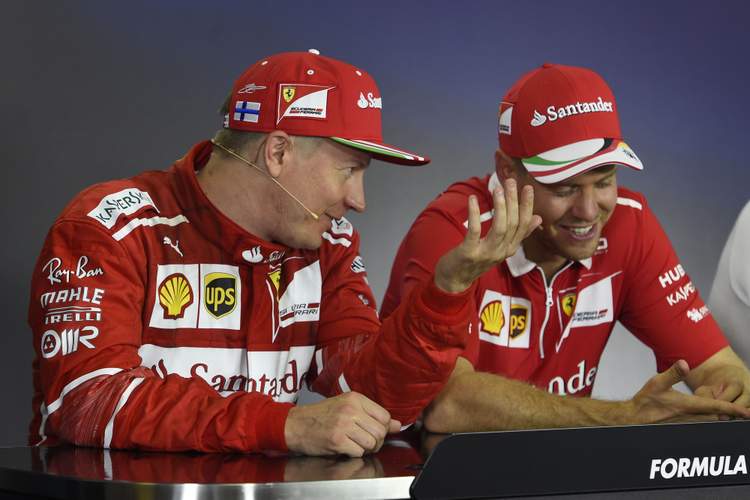 The Ferrari duo’s easy relationship and shared sense of pragmatism has made them a good fit for the improved Italian outfit this year –- a quality not missed at the weekend by Ferrari president Sergio Marchionne.

Answering questions from reporters Marchionne hinted that both were likely to stay, with an announcement expected at the Italian Grand Prix at Monza in early September.

“I think I have been public on the Sebastian issue, if he wants to stay he is more than welcome to stay,” said Marchionne.

“And in the case of Kimi, we are pretty well sure… we know he wants to stay. Hopefully, we will bring them on soon.”

Asked about a likely statement at the team’s home GP, he added: “That’s what I’ve heard –- I heard Maurizio (Arrivabene, team boss) was going to do that.”

The Ferrari president was more coy answering questions about hiring Hamilton in future, though.

“It would be a privilege if he ended his career at Ferrari.

“But for now, we have not gone far with Lewis… I will not talk about the future. We have two great drivers now and we don’t want to talk about alternatives.”

The revived Vettel has won four races this year, including Sunday’s victory in his 50th outing with the team, and with his championship lead can afford to relax during the August break.

“I want to win, It’s where you want to be. Our mission is to get back to the top and, obviously, we have had a great year and we have a great car.”

The German’s victory was his first in five outings since the Monaco Grand Prix where, on a similarly slow, twisting and demanding circuit, power was less effective than at such tracks as Silverstone or the upcoming venues in Belgium and Italy.

Hamilton, even in a Mercedes team where the drivers have equal status, will be favoured to shine at both of those and close the gap in the championship before the end of the ‘European’ season.

“This break has come at a good time for all of us,” he said. “Everyone needs to re-charge and come back fresh and I truly believe we can win this championship, but it’s going to need 100 percent effort.”

Big Question: Are Ferrari wise to keep Seb and Kimi?