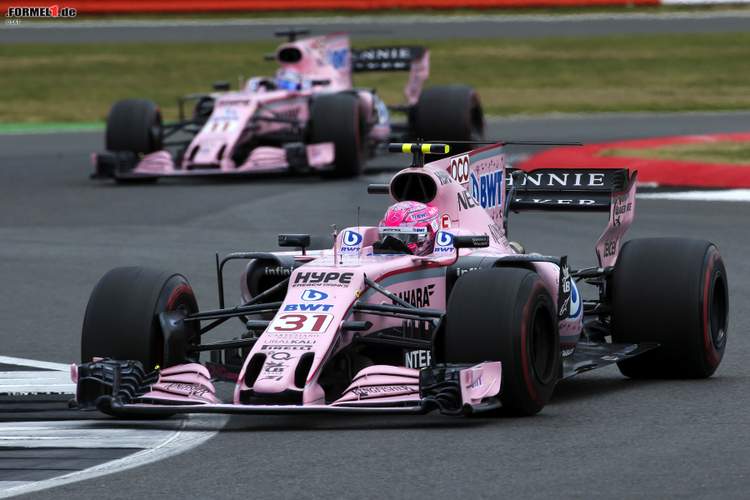 Force India preview the Hungarian Grand Prix, Round 11 of the 2017 Formula 1 World Championship, at Hungaroring near Budapest.

Vijay Mallya: “Silverstone was another solid weekend for the team. Both cars finished in the points for the eighth time this season. The developments we introduced delivered what we expected and the car continues to improve with each race. As I said before, this consistency is our strength and we won’t become complacent. This is only the half-way point in the season and there is a lot of hard work ahead of us. We will keep pushing, keep bringing new parts to the cars and keep the pressure on the teams we are racing against.

“Budapest should be another competitive track for us. Esteban tells me that it’s his favourite track of the year because he loves the chicanes. It’s never been a circuit where we’ve had much luck in recent years so hopefully things will change this year. We will be running Alfonso Celis in the car during free practice on Friday and we have two promising youngsters testing with us in the days after the race with Nikita Mazepin and Lucas Auer in the car. After that, there’s a well-earned rest for the entire team. We will do our best to sign off the first half of the year with a strong result.”

Sergio Perez: “This season has gone by so quickly. It only feels like yesterday we were racing in Melbourne and now we’re about to have the summer break. It’s been a satisfying first half of the year. I’m proud of the team and the work we have done to improve our car. I also feel I’m performing at my best and driving well. I have big hopes for the second half of the year and I feel we have the potential to get some very good results.

“I think we can be quick in Budapest. We have been competitive on every type of track this year so there’s nothing to worry about in Hungary. I like the twisty layout of the track – which reminds me of a street circuit – and when you find your rhythm it’s very enjoyable to drive there. Overtaking isn’t easy so you’ve got to deliver in qualifying or you know it’s going to be a tough race on Sunday. Track position is so important.

“I think everybody in the paddock is ready for a summer holiday. You always want a good result before you break up because it’s a long wait until you get back in the car. For whatever reason the Hungaroring hasn’t been kind to me for the last few years so it’s time to put that right.”

Esteban Ocon: “I love Budapest and the Hungaroring. It’s my favourite track of the year. I had a special weekend there when I was racing in Formula Three with two wins and a second place, and a double podium in GP3. It’s just a track that’s very satisfying to drive. When you get into the rhythm it feels great because you can really lean on the car and attack the kerbs. It’s a circuit that suits me as a driver and my driving style.

“I’m looking forward to the break and the chance to recharge my batteries. It’s been such a busy season and I’m ready to take a few weeks to catch my breath. I have to say I’m very happy with how things have gone since I joined the team. I feel stronger with every race and I think there is even more potential in the second half of the year. My objective is still to try and get a podium, but the priority is to keep picking up the points in every race – that’s what we need as a team. We just need to keep being consistent.”

Sahara Force India’s Chief Race Engineer, Tom McCullough, looks ahead to the race at the Hungaroring: “The final race before the summer break takes us to Budapest. The Hungaroring is one of the shortest circuits of the year, at 4.381km, and a high percentage of this short lap is spent cornering. Low and medium speed corners dominate this grip-limited circuit. The main straight is quite short in comparison to other circuits and the layout doesn’t promote overtaking – qualifying well and getting a good start are crucial. We travel to Hungary at the end of July, which means the weather can be very hot: track temperatures can reach above 50C, making it a thermally difficult circuit for the tyres and a challenge for brake cooling.”