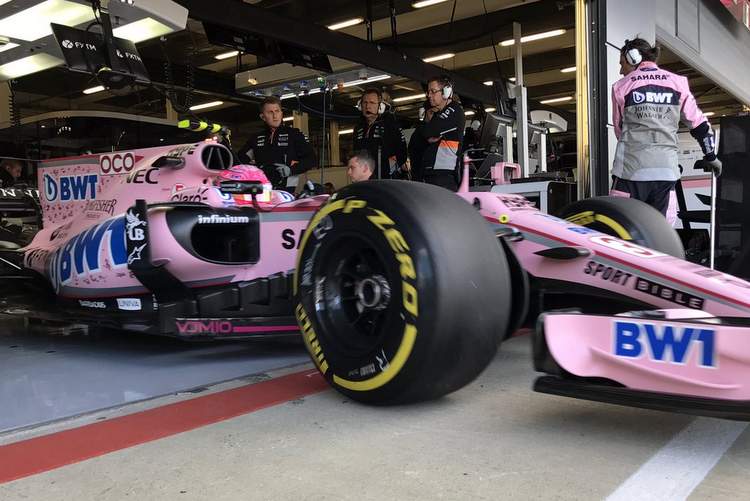 Given the proximity of Silverstone to the majority of teams’ factories, the limited development at last weekend’s race was a surprise. Force India, Renault and Red Bull were the most active in terms of updates, while the likes of Williams and Ferrari focused on optimising the array of new parts they introduced in Austria.

Force India arrived at its home race with a significant aerodynamic update, focused on the VJM10’s front wing. While the endplate, cascade and arch set-ups were unchanged, a great deal of work has taken place on the mainplane and flaps. Previously, the team had run two different front wings depending on the track layout. The difference between the two centred around the upper flap, which was reduced in size for the medium downforce version, lowering skin friction drag, while the lower AoA led to decreased vortex drag.

For Silverstone, a new high downforce wing was introduced, featuring a single slot in the mainplane, as opposed to two in previous designs – a very similar development was introduced by Ferrari in Austria. This raises the maximum downforce potential of the wing, but reduces the consistency with which this is achieved thanks to the greater probability of airflow separation from a larger chord curved surface.

Meanwhile, the number of flaps has been increased to three, with the old upper flap being slotted across its full length and split into two. This will have the opposite effect to that outlined above. With its new wing, it appears that Force India is looking at how to maximise the its consistency, while maintaining as much downforce as possible.

There are two extremes of where airflow separation may occur – at the leading and trailing edges of the wing. Given that there is not a great deal of camber (i.e. curvature) on the wing, and that the leading part is at a relatively flat angle, stall (the phenomenon of significant downforce losses and drag increases resulting from flow separation) at the leading edge is not particularly likely. This allows the use of just one slot in the mainplane without a damaging loss of load consistency.

However, with the upper part of the wing, namely the flaps, featuring a more aggressive AoA, trailing edge stall is more likely, hence why the team has shortened the chord of curved surfaces here. In this way, Force India has minimised the possibility of airflow separation and stall by attacking its most likely area, while clawing back some lost downforce in the mainplane area. 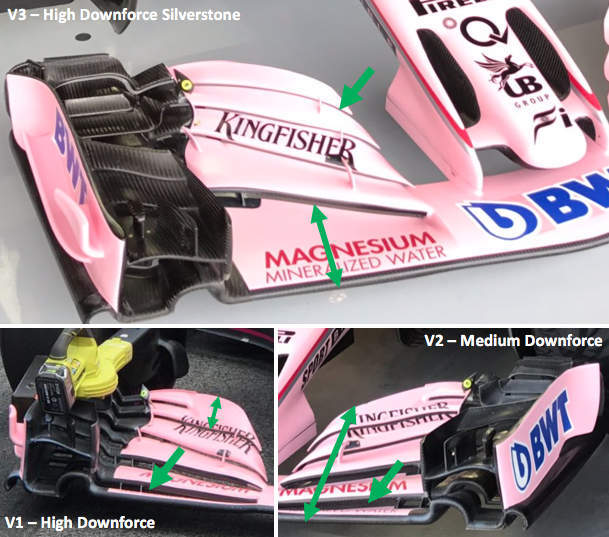 Renault made some detail changes to its R.S.17 for Silverstone, focusing on the bargeboards and underbody. Changes to the underbody were worth 0.15s per lap, a significant improvement, although no images of this have become available as yet. New bargeboards arrived on Saturday morning – an extra element was added to their base, slightly outboard of the main two parts and similar to that employed by Ferrari.

This part’s function is fairly simple to understand – to direct air outboard, into the path of the front tyre wake, dissipating it and improving rearward aerodynamic performance. Adding the part further forward of the main element allows the team to tackle the wheel turbulence earlier than before, for the same purpose as above. Unlike the main bargeboard element, there will not be a strong vortex shed by the new part to control the wake, thanks to its small profile.

Sauber did not bring any updates to its car for Silverstone, but it did continue to use its updated winglet attached to the chassis before the sidepod intake, first introduced in Austria. The part was re-shaped and re-positioned – firstly, there is a noticeably greater angle of attack with the new version, which will raise the pressure differential either side of it, strengthening the vortex shed as high pressure airflow spills over from above to below the winglet.

The winglet itself has been shifted down a little relative to the top of the chassis, and together with the re-shaping of the part, this will result in the vortex produced being directed to the lower part of the sidepod intake. The reason for this change is fairly simple – previously, the vortex headed to the top of the sidepod intake, where the inlet is at its widest, and hence the amount of air pulled into the vortex that would otherwise not enter the inlet was low.

By contrast, the new, stronger vortex, being close to the edge of the chassis, will pull in more air from outboard of the narrower part of the sidepod intake towards the inlet, resulting in a greater efficiency gain for cooling performance. The new vortex positioning would also have been considered in tandem with internal cooling parts’ positioning (e.g. the radiators), again for maximum cooling performance. However, the gain from this development must, of course, be weighed up against the greater vortex drag, especially for a team with an under-powered engine.