Vettel: Disaster? I don’t think so 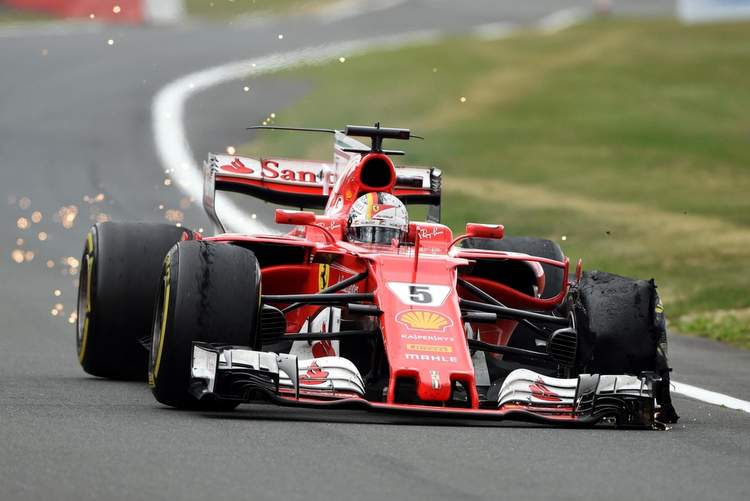 Sebastian Vettel started the British Grand Prix with a 20 points lead over fellow title contender Lewis Hamilton, two hours later his lead was scythed to a single point thanks to a huge helping of bad luck very late in the race, but the Ferrari driver is not calling it a disaster.

Speaking to reporters after dropping from fourth, with a lap to go, down to seventh when he crossed the finish line, Vettel said, “I think it could’ve been a little bit better for sure. Disaster? I don’t think so.”

“I think we had a good car, especially in the corners. The balance was alright. In the race obviously, brakes caught fire at the start, which compromised the start and from there it was a difficult race.”

One of the highlights of a n action packed afternoon at Silverstone was Vettel’s no punches pulled duel with Red Bull’s Max Verstappen. The German four times F1 World Champion tired every trick in the book to get past the tenacious Dutch teenager – but to no avail.

Ferrari shrewdly opted for the undercut which resulted in Vettel emerging from the pitstop in fourth and ahead of the Dutchman.

Vettel explained, “Didn’t get past Max, we did it with the pitstop. Then we were like P3, P4, it was clear that Valtteri would come because he benefited at the beginning because I was stuck, but overall small things here and there that led into a busy afternoon.”

Late in the race Vettel looked set for fourth, even third if Ferrari gave orders from the pitwall. But it never got to that as the tyres on the Ferrari number five were blistering profusely, and as a result he had no ammunition to fight off Valterri Bottas who was on a charge with supersofts.

Then with a lap to go they Pirelli cried enough, thus what looked like fourth (perhaps even a podium) turned to seventh place and a severe blow to the German’s title aspirations.

Vettel was pragmatic in the end, “Hindsight is great it’s easy but at the time it felt okay. Kimi I think had a similar issue, and his tyres were at least five, six laps fresher so I think it caught us both by surprise.”

Big Question: Bad luck or paying the price for taking a risk?