Ricciardo: The whole race was a fight 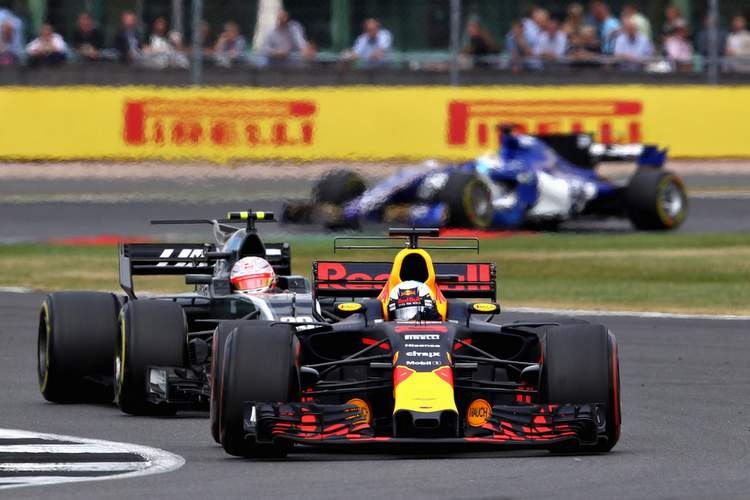 One of the big highlights of the British Grand Prix was the storming drive by Daniel Ricciardo from 19th on the grid to fifth place.

It was a superb performance by the Red Bull driver who was ruthless in traffic as he carved his way through the field in a manner that earned him the Driver of the Day accolade as voted by fans.

Sporting his trademark smile after the race at Silverstone, Ricciardo told reporters, “I hope they showed a lot of that on TV. I just felt like the whole race I was overtaking cars and I hope the fans enjoyed it.

“The whole race was a fight. I was coming through and then I made a really good re-start  – I got two cars by Turn 4 and then I was going for three.”

“I was probably a bit optimistic on the outside of [Romain] Grosjean and he didn’t give me much room. I probably shouldn’t have been there. It wasn’t the smartest place to put the car and I went off track and it probably damaged a bit of the floor. I fell back to pretty much last again but came back through.

“I caught Hulkenberg with a few laps to go and then Seb [Vettel] had his issue which handed me fifth, so ‘danke’ Sebastian,” added the Australian who saw his streak of five consecutive podium finishes end on the afternoon.

Nevertheless he added, “I’ve been really happy with how I’ve been putting my Sundays together for the last handful of races, it’s been strong and to get fifth from the back… I really couldn’t ask for more. Last week I was the hunted and this week the hunter, I love the fight of this sport and today I felt I could really enjoy that.”

“I would give this race ten out of ten in terms of fun. I think you could say that in the last six races the Honey Badger has certainly shown up on Sunday and it’s been great fun.”

The result means Ricciardo holds on to fourth position in the drivers’ standings, 37 points behind Mercedes’ Valtteri Bottas and 19 ahead of Ferrari’s Kimi Raikkonen.

Big Question: What did you make of Daniel’s drive?