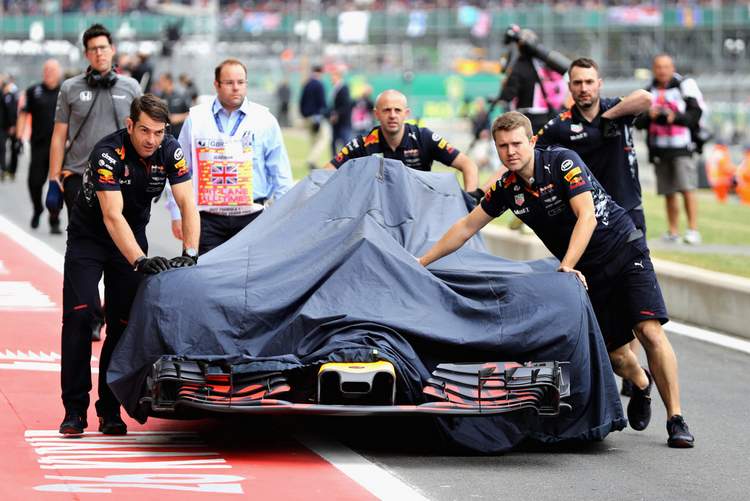 Daniel Ricciardo’s hope of a sixth consecutive pole positions received a mighty blow during qualifying for the British Grand Prix, when his Red Bull rolled to a halt after he sat top of the timing screens during Q1.

Ricciardo parked the stricken Red Bull on the entry of the Silverstone pitlane which forced the session to be red flagged briefly as marshals removed the stricken car.

The Australian told reporters afterwards, “It sounded a little bit sick, that was the first thing, then I lost a bit of power and heard some weird turbo noises.”

“I still don’t know much about how cars work but I think I know what a turbo sounds like, and I could hear it not behaving.

“It stayed running and then it all switched off. I thought I could nurse it back to the pits but then everything went off. It’s definitely a big failure of some sort, and we couldn’t save it for the session. Obviously I don’t know how this now affects us for the rest of the season, probably losing an engine now, but maybe it’s repairable.”

The mishap means that Ricciardo will start at the wrong end of the grid, and his plight likely to be compounded by additional penalties. He was already on a five place grid drop for a gearbox change before qualifying began.

He explained, “It’s disappointing because we know in these conditions give us a bit more of an opportunity, we were quick at the beginning there. Obviously tomorrow is another day — I’m just disappointed not to be able to show more of what we can do in qualifying. We’ve got some work ahead of us to get back in it.”

“Either in these [conditions] or dry we can fight through to get inside the top 10. We were quick out of the box, and I saw Max jump up there, so we have a good car. This weather could help me out, get me a few more positions. We’ll see,” added Ricciardo who last year finished fourth at the same race.