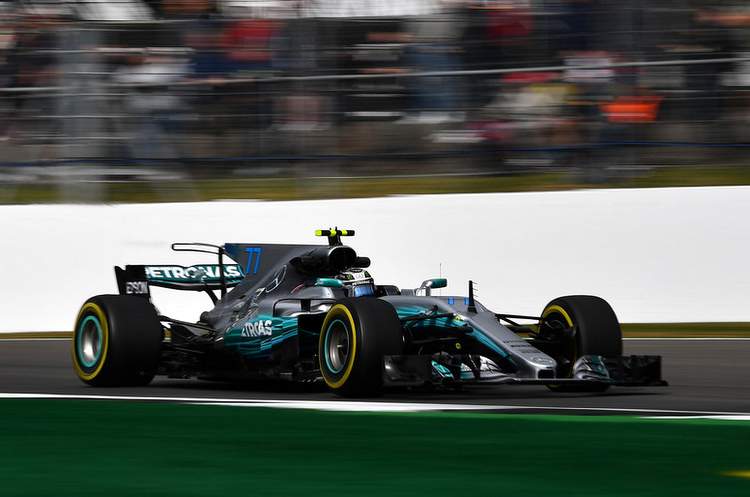 Valtteri Bottas edged out Mercedes teammate and local hero Lewis Hamilton in the second free practice session of the British Grand Prix weekend, with Ferrari best of the rest and starting to show their hand, albeit three tenths off the benchmark pace around Silverstone.

Bottas, who is clearly in inspired form since his victory in Austria five days ago, scorched around Silverstone in a best lap time of 1:28.496, which was 0.047 of a second up on Hamilton’s best lap time in the 90 minutes afternoon session.

Thus Bottas topped both sessions on the day, but there is very little separating the Mercedes chaps at the top of the timing screens.

After keeping their powder dry in the morning practice, Ferrari were chasing hard with Kimi Raikkonen third quickest and Sebastian Vettel fourth. But ominously for the Reds they were three tenths down on the Silver Arrows pair.

Fifth and sixth fastest were the Red Bull duo, with Max Verstappen fifth quickest albeit six tenths down on Bottas’ best, followed by Daniel Ricciardo who was a full second down on the top time.

It’s safe to say that the pecking order that has emerged this weekend is: Mercedes ahead of Ferrari, with Red Bull up next.

Nico Hulkenberg posted an impressive seventh fastest time in his Renault, followed by Williams’ Felipe Massa in eighth, Fernando Alonso in the McLaren ninth and Esteban Ocon rounding out the top ten in his Force India.