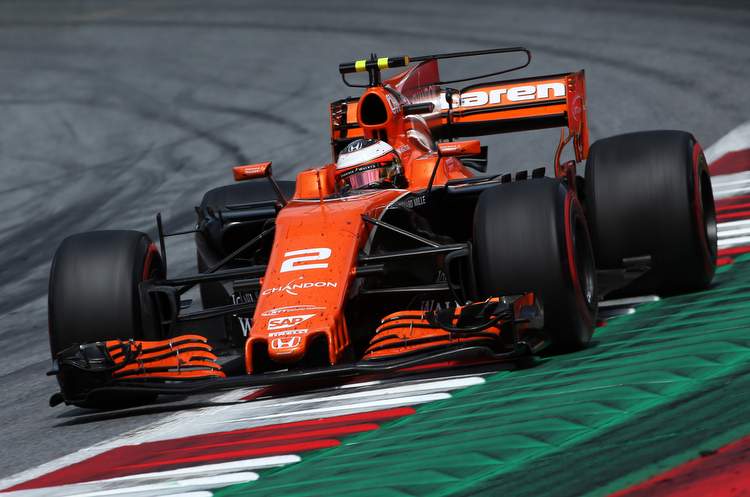 Silverstone and Formula 1 are inextricably linked, the former airfield hosted the first world championship grand prix in 1950 and it has been a regular fixture on the F1 calendar ever since.

It’s been re-profiled several times, but it hasn’t lost its high-speed character; the fast corners demand the same respect today as they did 67 years ago.

Fernando Alonso: “Silverstone is a racetrack that I enjoy coming back to year after year. Everyone knows it as a real driver’s track, with an incredible history and amazing support from the fans, so it’s a special weekend for every driver. For a McLaren driver, it’s even more special, and the reception we get from the British fans is always fantastic.

“I really enjoy the challenge of this circuit, and a good result there always feels like its well-deserved, because it’s a tricky track and a tough race. I hope we will have more luck at our home race than we did last weekend in Austria – it was an unfortunate incident and I hope we can bounce back, fight hard as always, and see what we can do in the race.

“The characteristics of the Silverstone circuit are high-speed, but also high-grip, and I’m excited to see how this year’s cars perform on this track – especially on the faster sections of the circuit. Let’s see if we can maximise the strengths of our car in the corners and fight for the best possible result for the team. It’s important that we can stay out of trouble at the start, and have good reliability throughout the weekend so that we can build momentum in every session leading up to the race.”

Stoffel Vandoorne: “I’m really looking forward to going to the British Grand Prix for the first time as part of a British team. At McLaren Honda, we are lucky that we receive amazing support from fans all over the world, but I know that the atmosphere at Silverstone is extra special. I’ve raced in the UK a number of times and I spend a lot of time there with the team, so it does feel like a second home to me now.

“The track is really fun to drive – very fast and tricky in places, especially at the start of the lap, and then the last sector with its infield section requires a different set of skills and a stable, responsive car. I’m looking forward to seeing how our car behaves, particularly in those sections, and hopefully we can stand our ground against our nearest rivals.

“I’ve stood on the Silverstone podium twice in GP2 and it was a great feeling. I hope I can have a positive weekend there again and have a smooth run up to Sunday, so we can maximise the package that we have. I feel comfortable in the car and we’re definitely making progress, so the aim is to be able to show that in front of the loyal fans and make the most of the weekend.”

Eric Boullier, McLaren-Honda Racing Director: “For obvious reasons, the British Grand Prix is one of the stand-out races of the season for everyone at McLaren Honda, and not only because we are a British team. From a fan perspective, it means incredible enthusiasm and support, huge crowds and a passionate audience, the like of which we don’t often see at any other venue.

“The Silverstone racetrack is also the stuff of legends, with its infamous corners – Copse, Becketts, Stowe – and it’s a circuit that has tested many a champion and delighted fans with its epic racing. It’s tough, too: high-speed, challenging, and very demanding on both the car and the driver – especially with the 2017 cars, which promise to look spectacular around this track.

“While it won’t be the easiest of circuits on which we will put the MCL32 to the test, we are immensely looking forward to the typically awesome atmosphere that enjoy every year at Silverstone from the relentlessly vocal and passionate British fans, who never fail to lift us and carry us through the weekend. We will work as hard as ever, and we hope to put on a good show for our loyal fans, colleagues, partners and guests alike.”

Yusuke Hasegawa, Honda R&D Co. Ltd Head of F1 Project & Executive Chief Engineer: “The British Grand Prix marks the half way point of the season, and is one of the highlights on the Formula 1 calendar. It is one of the oldest and most iconic races, but also one of the most demanding for the team and drivers.

“The layout, with its long straights and high-speed corners, has a great flow to it but puts every area of the car to the test – including the PU. It’s long and flat, and fuel and power hungry, so I’m expecting it to be challenging for us. And of course we will have the notoriously unpredictable British weather to contend with too.

“The result in Austria wasn’t what we had hoped for or expected, but having said that, we showed some genuine progress which I hope we can continue to build on this weekend. We’re as motivated as ever, and working to move forward as quickly as we can.

“Finally, Silverstone will also mark the first of two home grands prix for the McLaren Honda team this season, so we’re looking forward to what will be a busy but special weekend. The crowd is always amazing and we expect to have many fans, colleagues and family members watching, so we will do our very best to show them a good race and collect some points in front of the home crowd.”