Talking technical after the Austrian Grand Prix weekend, Round 9 of the 2017 Formula 1 World Championship, at Red Bull Ring.

Williams introduced a significant upgrade package for the Austrian GP that it hoped would give it a sizeable advantage in the battle for fourth in the championship with Force India – however, this was not the case, with the team struggling for balance all weekend. Since the hybrid era began,

Williams had favoured regular bitesize updates as opposed to larger packages, but the influence of Paddy Lowe may be visible in this more significant set of developments. At the front of the car, the front wing’s endplate canard has been revised, being subtly reshaped, but most notably, it no longer slants outwards.

This change is aimed at optimising the way airflow is directed around the front tyre. Previously, the canard not only shifted the airflow upwards, but also outwards with its slanted shape. At the same time, it shed a vortex that interacted with the air leaving the endplate to draw as much flow around the tyre for lower drag and turbulence. The new version still produces a rotating airflow and directs air upwards, but not outwards, leaving this latter effect solely to the endplate.

Lastly, the treatment at the leading edge of the sidepod has been altered. Previously, a trio of vortex generators were used to improve the attachment of flow to the sidepod, especially in the region where it drops off, over the driver’s shoulder.

Now however, a leading edge slat is being used to ensure that flow colliding with the top of the sidepod intake does not flow vertically upwards, and create a low pressure region further back that increases pressure drag. Therefore, in order to reduce drag, the team is looking to attack this problem further forward with this update.

Mercedes introduced a series of detailed aerodynamic updates in Austria, of which the most interesting was around the mirror area. Having already began the season with an aggressive design here, Mercedes has optimised this further, with the main mirror stalk being revised.

For 2017, with the lower rear wings, most teams have been active in minimising disruption by the mirrors to their car’s rear-end performance. Previously, the champions were using a tall pair of stalks in order to control the flow over and around the cockpit sides and reduce this bulky area’s disruption to sidepod performance.

The new design focuses much more on optimising the rear wing, with a lower and wider mirror location. The wider positioning is particularly interesting since Mercedes usually uses a ‘spoon’ shaped rear wing, so the base of the wing’s mainplane is higher the further outboard the location, and therefore it makes sense to move the mirror as far from the centre of the car as possible. 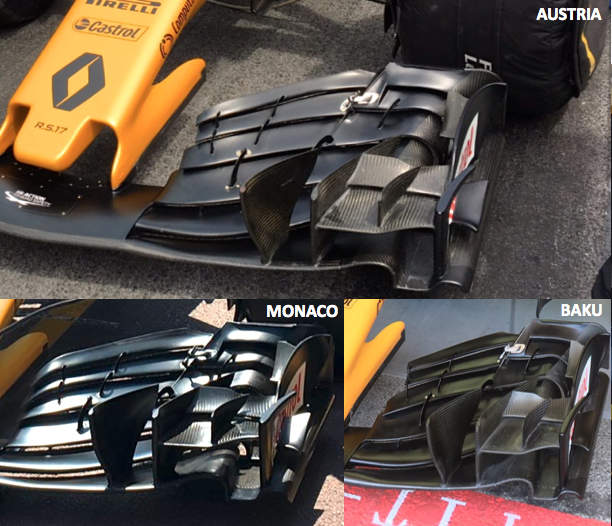 Although Renault did not bring any new parts to its car in Austria, there were some interesting technical details to note. Firstly, the team raced the medium downforce front wing it first brought to Canada, where it ended up using the low downforce edition, as in Baku. Both of the lower drag wings feature reduced width flaps, with the inner portion being terminated further outboard.

The result of this is lower skin friction drag, while the lower flap width results in a reduction in vortex drag, since each portion of wing, not matter how close to the tip, contributes to induced drag, where high pressure air spills over from above the wing to beneath it, creating a rotating flow.

The Austrian track layout is similar to Canada in terms of straightline speed dependency, and therefore, it would be expected that all teams would have run the same front wings as in Montreal. However, thanks to the track being at 700m altitude, where the air is thinner, the same wing profile produces less drag and downforce.

Therefore, in order to reach the optimum downforce-drag compromise, which is purely dependent on the track layout, a more aggressive wing must be used. When making these changes to the front wing, aerodynamicists must also consider the effect on bargeboard performance in dissipating front tyre wake, since the vortices shed by the flap tips are further outboard.

Lastly, at the rear of the R.S.17, the team returned to its old shark fin design, used until Monaco, and once again ran without a T-Wing. An example of where the shark fin proves beneficial is when a car is in an oversteering moment (the back end has stepped out). As the rear of the car slides into the surrounding air, the shark fin area exerts a force on the air particles with which it collides.

In return, by Newton’s 3rd Law, the air particles exert an equal and opposite force on the fin. Since the shark fin’s centre is certainly not at the point of the car’s longitudinal centre of gravity, the force on the shark fin creates a moment about the longitudinal CoG, in the direction opposite to the sliding, stabilising the car. By enlarging its shark fin for Monaco, Renault was trying to maximise this effect.

However, in doing so, when the car slides, the amount of air reaching the rear wing’s portion closest to the kerb is reduced significantly, and therefore, the amount of rear downforce produced falls, enhancing rear end instability.

This may even be enough to cancel out the benefit from the shark fin outlined above. As teams have collected increasing amounts of data from their new cars, and tallied this with driver feedback, a move back to the old design would have been discernible.