Early DNF for Verstappen and Alonso caused by Kvyat 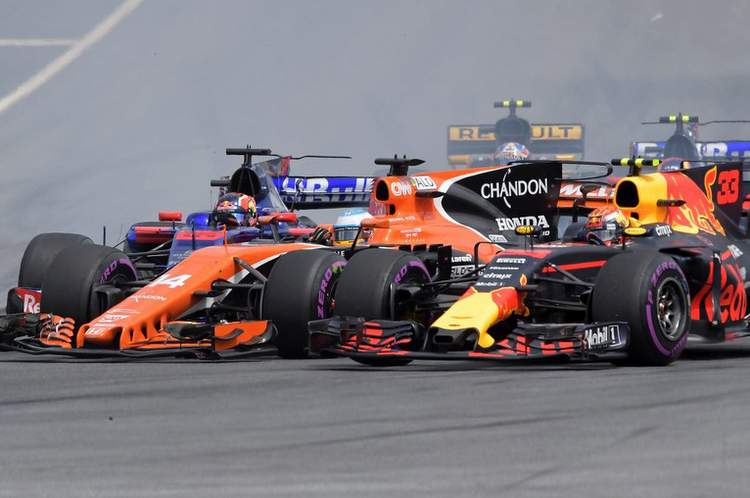 Red Bull driver Max Verstappen and McLaren’s Fernando Alonso were both forced into early showers after being caught up in a Turn One melee on the opening lap of the Austrian Grand Prix.

Alonso made a great start from from 13th saw him overtake the sluggish starting Red Bull as Verstappen – whose anti stall failed – was engulfed by the pack, but both drivers ended in the gravel after Daniil Kvyat clattered into Alonso.

Kvyat passed his Toro Rosso team-mate Carlos Sainz off the start and up the hill to Turn 1, but hit the brakes too late and slammed into the back of the McLaren, who banged into the Red Bull. A case of three into one does not go…

The damage sustained was enough to force Alonso and Verstappen out of the race.

Kvyat who is known for his first-lap incidents, was able to resume the race but the stewards handed him a drive-through penalty for causing the accident.

Kvyat said after the race, “I think we need to look into it, because we tried to do our best in terms of brake balance for Turn 1, but I’m not sure it helped. It felt like I locked the rear, then locked the front – and then all four wheels slide and you’re just a passenger.

“Very disappointing of course, just couldn’t avoid the car in front of me. Very upset, but now don’t see any option other than turn the page and move on. I don’t see anything else.”

Red Bull team principal Christian Horner had sympathy for Kvyat, “He’s not going to be judged on that move – that’s a racing incident.”

“I think he’s been having a pretty good season. We’ve got plenty of time, but I can’t see any reason why Red Bull would want to change him at this point in time. Let’s see how things pan out,” added Horner.

For Verstappen, the race retirement was his fifth DNF in seven races in what is unraveling to be a hugely frustrating spell for the Dutch teenager.

Horner said of Verstappen’s misfortune, “He’s just having all the bad luck at the moment. It will turn.”

Big Question: Does Kvyat deserve to be in Formula 1?