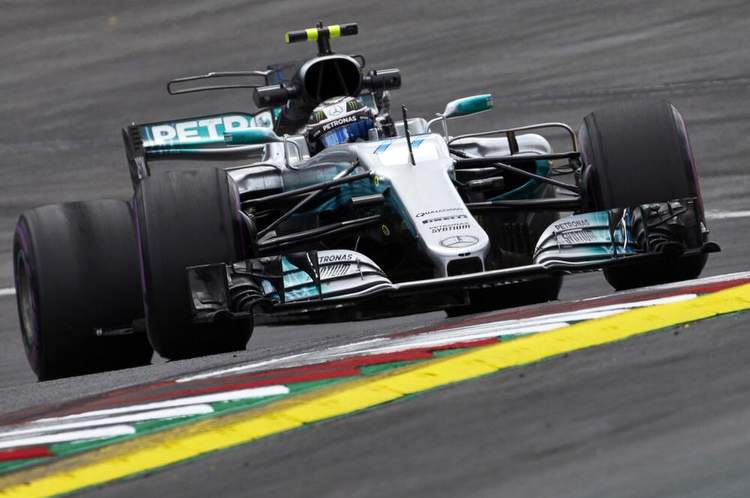 Mercedes driver Valtteri Bottas emerged from the shadows of the Sebastian Vettel versus Lewis Hamilton battle to claim pole position for the Austrian Grand Prix at Red Bull Ring.

Q3 was an anti-climax as Romain Grosjean’s Haas came to a stop in the final moments of the session, which scuppered all the final runs that were in progress at the time.

Bottas pole winning time of 1:04.251 was a mere 0.42 of a second better than Vettel’s time, the Ferrari driver will start from second on the grid.

Speaking after his second career pole winning lap, Bottas said, “It feels good. I really enjoy driving here. I enjoyed it today the car was getting better and better as the grip was coming. A decent lap at the end, it wasn’t perfect, but it was enough.”

Vettel has been chasing the Silver Arrows all weekend, and to split them on the timing sheets will no doubt give the Italian team a timely boost.

Vettel said afterwards, “My lap was not quick enough but I am very happy. I was hoping for a last run but it was an anticlimax with the yellow flag. It is a great track, shame it is a bit short.”

Hamilton was third quickest, but a five place grid penalty for a gearbox changes means he will start from eighth place on Sunday.

Hamilton said afterwards, “Congratulations to Valtteri, he did a fantastic job and Sebastian has been very quick. It just wasn’t meant to be today. I’ll do the best job I can. I want to get up there and get a one-two with Valtteri.”

Interestingly the triple F1 World Champion opted to run supersofts in Q3, which means he will start with the red band Pirelli tyres while his rivals around him will have purple band ultrasofts bolted on which should mix things up.

This was the first quali since the collision between Hamilton and Vettel during the race, apologies were made and the pair faced the media during a press conference on Friday.

Interestingly, after the session Hamilton sought out Vettel to shake his hand as they waited on the grid for their post-qualifying television interviews, but refused to shake it again when asked by the interviewer Davide Valsecchi to do so again in front of the TV cameras.

After playing second fiddle to Red Bull teammate Max Verstappen, Daniel Ricciardo came out on top in qualifying with the fifth best time, a tenth faster than the Dutchman who spun out on his final attempt, just as the yellow flags came out for Grosjean’s incident.

Ricciardo summed up his afternoon, “Starting fourth is as good as we could expect. We looked pretty close to Kimi. It’s nice to be in that hunt. It’s my equal best start of the year. I’m pretty happy with how the session went. It would have been nice to round off the session but there were a few yellow flags about.”

Verstappen said, “At Turn Seven I tried to be a little too aggressive with the throttle and lost the rear. In terms of race pace, we can’t keep up with Mercedes and Ferrari but with a good strategy you’ll never know.”

Despite stopping in the final minute of the session, Grosjean did enough to claim seventh place on the timing screens, ahead of the Force India pair of Sergio Perez and Esteban Ocon who were eighth and ninth respectively, followed by Carlos Sainz in the Toro Rosso who rounded out the top ten.

Magnussen, who had finished in P7 in FP3, set the early pace in Q1, before he was first usurped by Riccairdo and then sidelined by a suspension failure. The Haas driver would eventually go through to Q2 in P12 but did not take any further part in the session and qualified in P15.

As the segment got into its stride it was Vettel who established himself at the head of the pack with a time of 1:05.585. The Ferrari driver set the time on suspersoft tyres and sat back and waited to see if he could get through without resorting to the ultrasofts almost every other driver was using.

Hamilton’s 1:05.064 dropped Vettel back, as did Ferrari team-mate Raikkonen’s 1:05.148, set on ultrasofts, but otherwise Vettel went safely through on supersofts in P3 ahead of Sainz, Bottas (the only other man to just use supersofts in the opening segment) and the Red Bulls of Verstappen and Ricciardo in sixth and seventh respectively.

Sainz’s excellent lap came right at the end of the session and was much needed, with the Spaniard languishing in the drop zone in the final minutes. There was to be no escape for the Williams drivers, however.

As the final time arrived, Massa and team-mate Stroll found themselves lodged in 17th and 18th places respectively and unable to find the pace to make up the time to vault past 16th placed Palmer of Renault. The Williams drivers went out ahead of the Saubers of Ericsson and Wehrlein.

In Q2 it was Bottas who seized the initiative. With ultrasofts onboard he powered to P1 with a best time of 1:04.316, almost half a second clear of second-place Vettel and third-placed Hamilton, who this time was the one to opt for supersofts, meaning he’ll start on that compound.

Verstappen was fourth ahead of Raikkonen and Ricciardo. Grosjean was seventh for Haas ahead of Perez, Sainz and Ocon.

Eliminated at this stage, though, were Hulkenberg in P11, followed by the McLarens of Alonso and Vandoorne, Kvyat in the second Toro Rosso in P14 and the unfortunate Magnussen.

After the first runs in Q3 Bottas held a narrow advantage over Vettel and it proved crucial. As the drivers warmed-up for or began their final flying laps, Grosjean stopped on track and the resulting yellow flags prevented improvements at the front.

The top three positions remained unchanged, with Hamilton in third and set to start from eighth place once his gearbox penalty is applied ahead of the race start. Raikkonen was forced to settle for best of the rest in fourth, half a second down on his team-mate.

Ricciardo outqualified team-mate Verstappen for the first time since the Russian Grand Prix. The Australian qualified fifth and is set to start fourth. Verstappen, meanwhile, might have improved by he made a mistake on his final lap and went off in Turn 7.

Grosjean qualified seventh, with Force India duo Perez and Ocon in eighth and ninth, and Sainz making up the top 10 for Toro Rosso.