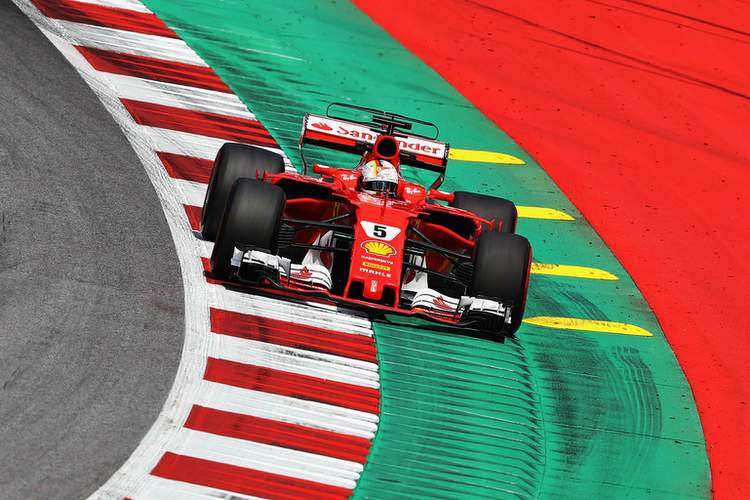 Ferrari driver Sebastian Vettel showed his hand in the final free practice session of the Austrian Grand Prix weekend, by claiming top spot on the timing screens at the end of the one hour session at Red Bull Ring.

The German traded fastest laps with title rival Lewis Hamilton before posting a new lap record to finish clear of the field.

Vettel’s best lap of 1:05.092 was a quarter of a second up on title rival Lewis Hamilton who was second fastest, and who was 0.154 of a second quicker than his Mercedes teammate Valterri Bottas.

In the wake of his five place grid penalty for a new gearbox,  Hamilton’s run ended with a big brake lock-up into turn three as, having dominated Friday practice, he had to settle for second best.

Kimi Raikkonen was fourth in the other Ferrari, albeit half a second down on his teammate, suggesting that it will be Mercedes vs Ferrari battle for the front row of the grid in the afternoon’s qualifying session at Red Bull Ring.

The Red Bull pair, at their home race, were next with Max Verstappen fifth and Azerbaijan race-winner Daniel Ricciardo sixth.

Daniil Kvyat was ninth in the Toro Rosso ahead of his colleague Carlos Sainz, who had suffered an engine issue early in the session, but nevertheless managing to make it two Toro Rossos in the top 10.

Jolyon Palmer put the sister Renault in 14th, with Fernando Alonso down in 15th after McLaren confirmed they had to replace his upgraded Honda engine, new for this weekend, for an older specification.

Williams struggled as Lance Stroll was 16th fastest with team-mate Felipe Massa below him. Sergio Perez was 18th with the Saubers of Marcus Ericsson and Pascal Wehrlein again bringing up the rear.

After giving Hamilton’s car the once-over, Mercedes confirmed shortly after practice that the lock-up had led to a brake-disc failure but that the relevant parts would be replaced in plenty of time for qualifying.