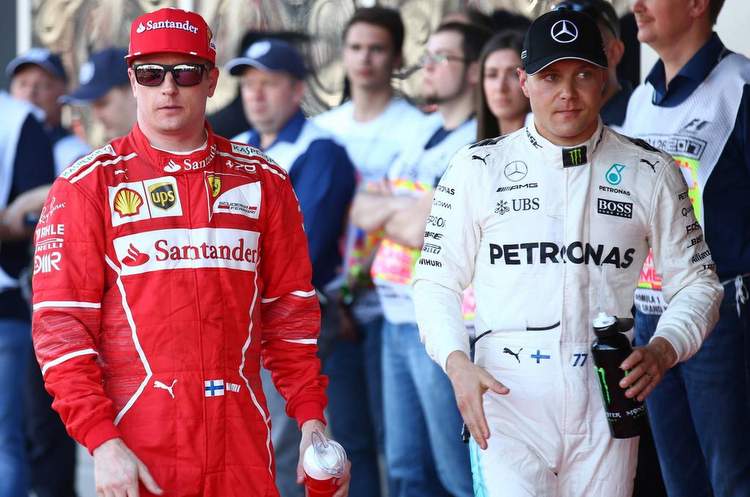 The clash of the Finn’s – Kimi Raikkonen vs Valtteri Bottas – is becoming something of a regular feature in Formula 1, most recently the pair came together during the Azerbaijan Grand Prix, but the Ferrari driver believes it’s only a big story because they are fellow countrymen

In Baku the Ferrari driver and the Mercedes driver collided when Bottas got it wrong during an overtake which saw him bounce off the kerb and tag Raikkonen’s car.

Bottas recovered from last place, as a result of the incident, to storm through the field and finish second, while Raikkonen’s race was compromised and eventually called it a day, a couple of laps from the end of the race he was classified down in fourteenth.

It was another in a series of on-track altercations, over the last couple of years, between Finland’s finest.

Raikkonen told reporters ahead of the Austrian Grand Prix, “We don’t know each other very well, it’s pretty much the same as with the other drivers, even if we’re Finns.”

“Because he’s quite a bit younger we never raced each other until Formula One, but it’s a bigger story because we’re Finns. If one was a Finn and the other wasn’t, it wouldn’t be made such a big thing out of it — but it’s far from ideal.”

“It cost us a lot of points in the last race and it wasn’t really our fault. But that’s how it goes sometimes and it has happened a few times, sometimes my fault, sometimes his fault. It would be better if it would be in the other end of the starting grid.”

“That’s what happened in the last race, right at the start making our race very difficult, after a good start. It turned even worse later, again completely out of our hands, but situations like that happen sometimes.”

Asked if Bottas needed to adjust his driving style, Raikkonen replied, “I don’t know. For sure I was surprised how early he braked and obviously, like you said, he tried to get it back but it was a bit too late. I guess he tried to avoid me, but there was a kerb and he jumped over that but sometimes you have to know when to give up the fight but that’s not always very easy.”

“Sometimes things happen but hopefully it was the last time now, but you never know,” added Raikkonen who lies fifth in the championship standings, with Bottas in third.

Big Question: Why are Kimi and Valterri ‘magnetically’ attracted to one another on track?