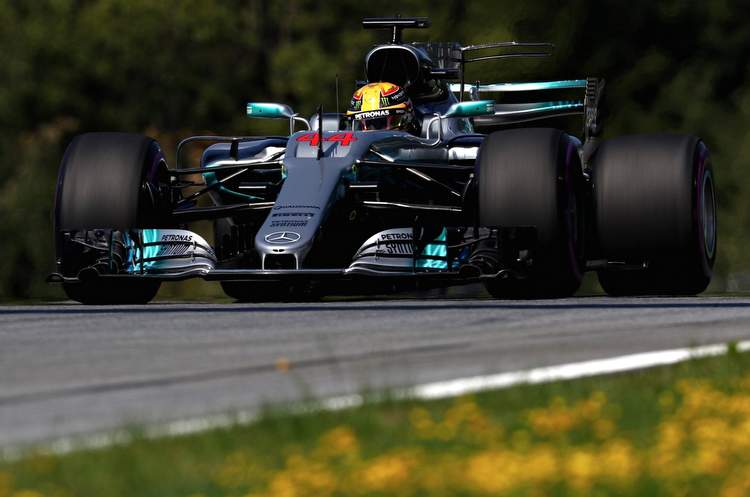 Mercedes driver Lewis Hamilton edged out Red Bull’s Max Verstappen as he set as the fastest lap in the first free practice session of the Austrian Grand Prix weekend.

With Pirelli soft tyres bolted on to his Mercedes – the hardest of the three compounds available at Red Bull Ring – Hamilton set the fastest lap of 1:05.975, the time ever recorded on the current layout of the Spielberg circuit to go 0.190 of a second clear of Verstappen, whose best time was set using supersofts.

Verstappen was in feisty spirit on Red Bull’s home track, but tapped the barriers early in the session after going off at Turn 7, was on course to top Hamilton late in the 90 minutes session before a spin at Turn 3.

Verstappen, Haas driver Romain Grosjean, and Toro Rosso’s Carlos Sainz Jr. wobbled on Turn One – as did Hamilton late on in the session.

Valtteri Bottas was third fastest in the other Mercedes, fractionally faster than championship leader Sebastian Vettel in the Ferrari, one of several drivers to spin during the session.

Kimi Raikkonen also lost control of his Ferrari, albeit with no damage, finishing sixth behind the Red Bull of Baku winner Daniel Ricciardo.

McLaren enjoyed a positive session with their Spec-3 Honda engine allowing Stoffel Vandoorne and Fernando Alonso to end the session seventh and ninth respectively, with Daniil Kvyat’s Toro Rosso sandwiched between the pair on the timing screens.

Force India’s Esteban Ocon rounded out the top ten, while Alfonso Celis did duty at the wheel of Sergio Perez’s car during FP1, he was 18th on the timing sheets.

Also sitting out the session was Renault’s Nico Hulkenberg, who handed his car to Sergey Sirotkin for the morning session. The Russian ending 17th fastest half a second down on Jolyon Palmer in the other Renault who was 14th.

The top six were separated by just over half a second, suggesting a tight contest is on the cards in Austria, although Hamilton’s time set on softs will have sent out an ominous signal to his rivals.