Hamilton and Vettel move on ahead of Austrian Grand Prix 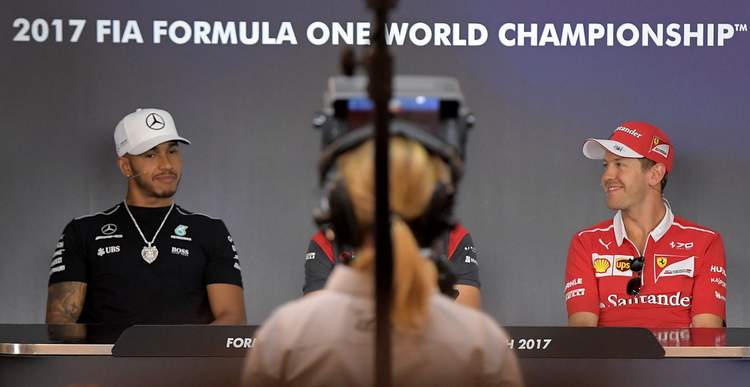 A contrite and apologetic Sebastian Vettel accepted full blame again for the controversial incident with Lewis Hamilton during the recent Azerbaijan Grand Prix.

Sitting alongside him at a packed news conference on Thursday, Hamilton accepted the apology but maintained justice was not done.

Two weeks ago, an irate Vettel swerved into Hamilton, albeit at slow speed, because he thought the British driver slammed his brakes on recklessly late, right in front of him, seconds earlier.

“It was the wrong move to drive alongside him and hit his tire. I guess that’s what you all want to hear,” Vettel said. “Am I proud of the moment? No. Can I take it back? No. Obviously what I did was wrong and I apologized. I did make a mistake and I can understand if he’s upset. It’s good that we can move forward.”

Vettel escaped further punishment this week after Formula One governing body the FIA reviewed the incident in Paris. Vettel traveled to the hearing, apologized, and escaped with a verbal warning from president Jean Todt.

Insufficient in Hamilton’s view, “Jean should be sitting next to us to be honest, to answer the same question. They didn’t change anything on the Monday, so the message sent remains the same.”

In other words, that dangerous driving went unpunished, in this case.

“An intense battle is good for any sport, I don’t disagree with that,” Hamilton said. “But we are used as a platform, we are a role model and we are supposed to inspire and send a message.”

After the race, an irate Hamilton said Vettel “disgraced himself” for his driving.

“I don’t think I have to take back anything I said,” Hamilton said on Thursday. “It’s water under the bridge now.”

Their heated clash further raised the profile of an already intriguing Formula One season. Vettel, chasing a fifth world title, leads the championship after eight races. Hamilton, chasing a fourth title, is 14 points behind in second place heading into the Austria GP this weekend.

There was a buzz of anticipation before the news conference, and the mood was leavened by Danish driver Kevin Magnussen, the first of the three scheduled drivers to arrive. Magnussen gave a thumbs-up – jokingly pretending he was the center of attention – and pretended to leave his seat in the middle free, so the rivals would have to sit next to each other.

Then the questions began, with Vettel soon on the back foot.

At the time, he explained, he reacted angrily because he thought Hamilton brake-tested him – a dangerous move in F1 whereby a driver suddenly slams on the brakes to impede the driver behind.

“I had the impression at the time that I got fouled, which was wrong,” Vettel said. “If I could go back in time and literally take it back I would, but I can’t.”

Asked if he had used his car as a weapon, Vettel became defensive, arms folded.

“I never had the intention to hurt him, to punch him,” he said, pausing to find his words, and then refuting suggestions he has a problem controlling his temper. “I don’t think so. I can see why you might believe it.”

Although he felt Vettel should have been punished further, Hamilton insisted their mutual respect remains intact. “Sebastian and I spoke on the Monday (the day after) and then I got a text the next from Sebastian the next day (apologizing) and I did accept it.”

“I said I still had the utmost respect for him as a driver. My only point to Sebastian was to correct publicly that I brake-tested him, which was not the case. People were sending messages to me that I was out of order,” added Hamilton.

Other drivers, such as Brazilian veteran Felipe Massa, felt Vettel went too far, “Sebastian was a bit over the limit, Everyone wants to see them fighting, fire around the championship, but not in this way.”