Inside Line: Is Vettel the right man for Ferrari? 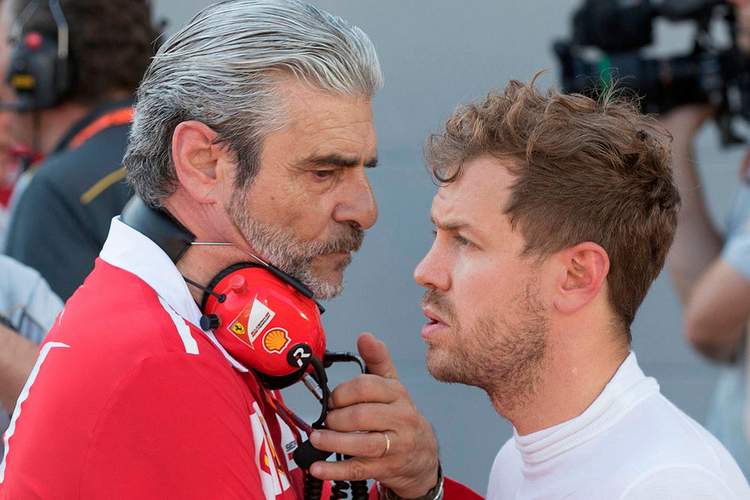 As has been widely reported, Sebastian Vettel did himself no favours with his antics during the Azerbaijan Grand Prix and while it was thought that a chit-chat with Lewis Hamilton would clear the air, now it appears the FIA will not let the matter lie. Report here>>>

But, irrespective of what happens, right now a nagging question arises from the incident: Is Vettel the right man for Ferrari?

I for one tip my hat to Maurizio Arrivabene for galvanising Ferrari into the race winning force they have become this year. He has transformed the so called “culture of fear” that prevailed last year within the corridors of Maranello into a calm and collected squad going about their business with minimal fuss.

In 2016 tensions overflowed to the point that Arrivabene was forced to publicly chastise Vettel. The German was almost out of control with his rants and demeanor. His expletive laden tirade directed at FIA race director Charlie Whiting during the Mexican Grand Prix was an example of how not to conduct one’s self, even less so as a quadruple F1 World Champion.

Increasingly I find that the problem with Vettel is that if he does not have a race winning mount or if his rivals have a better car at their disposal, the German struggles to contain himself and a wicked frustration surfaces.

In Baku, the penny must have dropped when Hamilton out-qualified him by a whopping 1.2 seconds, while Valtteri Bottas in the other Mercedes was 0.8 of a second better than the Ferrari driver on the day.

I am of the opinion that Mercedes have a substantial amount horses in reserve which they can dial into when the need arises. And in qualifying they were dialed up big time. Vettel and the Reds will have suspected that in Canada and in Baku it was obvious.

At this stage Ferrari appear capable of matching the pace of the silver cars in race conditions, but the gap has closed considerably and I would venture to say that if Mercedes’ upward mobility continues unhindered Ferrari will slip behind them very soon. And their ace driver knows this.

Until now Vettel’s toys have remained in the pram… now a race comes along where things do not go his way, which triggered the pent up fury which we witnessed in Baku. What transpired was a clear case of ‘road rage’ which would have him in deep trouble had he done it on a public road.

This is why you have to question if this is the kind of driver Ferrari need to succeed.

In the wake of the Baku absurdity many have compared his behaviour to that of Michael Schumacher. Alas I do not see the similarities. For sure there is a likeness in their approach and attitude, and of course they are both German.

We all know that Schumacher was not shy of a sly move or two – punting Damon Hill and squeezing Jacques Villeneuve pop to mind among many others – these were instant and instinctively calculated acts of malice, his anger and temperament never sunk to the nadir that Vettel is capable of reaching.

There was no rage in Schumacher’s actions, quite the opposite actually, they were clinically thought through, instinctively ruthless, well calculated, devoid of emotion or red mist and immune to the damage afflicted to others. Schumi seldom if ever repented.

Vettel often apologises for his misdemeanours, accepts blame or acknowledging his mistakes and often appears contrite, provided he has a car that is the best one out there which allows him to make amends for the bouts of emotional waywardness.

At Schumi-era Ferrari there was no pent up anger and malice which he carried into the garage, Jean Todt and Ross Brawn would not indulge such behaviour, and never had to because that was not how Schumacher operated.

He was cool and collected which ensured that the team garage was devoid, almost oblivious, to his on-track indiscretions and the controversies they at times ignited. In other words it was a calm Red garage.

Schumacher and Vettel are perhaps similar on the surface, but deep down very different.

Vettel carries his anger with him, his smile is a frown turned upside down, and thus infects the environment in which he works. It happened at Red Bull in his final year. His side of the garage was a morbid pit compared to the section in which Daniel Ricciardo went about his business.

Great drivers need to do all they can to succeed on track, but at the same time they have to shield the team of their imprudence by being tranquil when all around them mayhem ensues.

But at Baku Seb’s true colours emerged again, the car he is now peddling is no longer the best in the business. He is not the same guy he was at the start of the season, because he is starting to feel that Mercedes have the beating of the Ferrari, for sure in qualy but perhaps also in race mode too.

As charming as he can be, Vettel has a demon deep inside.

Mark Webber told Nigel Roebuck during an interview in 2009: “I can see why Seb’s popular. He’s normally polite, got a sense of humour, and smiles a lot, but if things go wrong… mate, when it comes to throwing toys out of the pram, I’ve never seen anyone like him.”

Webber also gave insight into the root of the German’s volatile temperament, “I’m sure some of Seb’s behaviour was down to his youthfulness, but the team’s executive management repeatedly allowed him to get away with it.”

“No one was ever big enough to pull him into line, tell him that kind of behaviour wasn’t acceptable. He was treated like a favourite son, which meant he would throw his toys out of the pram from time to time when he didn’t get his own way.”

“Even so, I couldn’t help but try to cut him a bit of slack because I got to know his family a little and I liked them. Despite the language barrier, you could tell they were decent people with a good set of values. Essentially he was a good kid at heart but the team allowed him to behave like a spoilt brat,” added Webber.

Back to the Mexico incident last year during an intense battle with Max Verstappen, Vettel went berserk over the radio to his engineer:

At which point Arrivabene came on the radio and said firmly: “Sebastian calm down. They are under investigation. We know it is not fair, but calm down. Put your head down and we talk afterwards.”

And that is the key to the question of whether Vettel is the right guy for Ferrari. Arrivabene knows the best tonic for his team is a calm and collected driver in the cockpit and outside of it.

After the Mexican meltdown Arrivabene commented, “He gave his excuses to Charlie and we talked together, Sebastian and I, and that’s it. He apologised and I am sure it is not going to happen again.”

Clearly lessons were not learnt on that day by Vettel, the rage he showed that day last year surfaced again when he swerved into Hamilton in Baku.

No doubt there was gamesmanship from the Mercedes driver, but Vettel’s reaction was wrong irrespective of the provocation. It was his Zinedine Zidane moment. He clearly has not calmed down and perhaps never will.

Behind closed doors at Maranello, I can imagine that Arrivabene will have a firm word with his star driver to and thereafter have a quiet ponder and ask himself: Is Seb really the right man for Ferrari.

Big Question: Is Vettel the right man for Ferrari?